Is Lloyd Austin A Liar Or Is Joe Biden Blowing Smoke Up His Arse About Israel?

The Defense Secretary Claimed Biden's Commitment To Israel Is Ironclad Has He Noticed What The President Has Done In Only Three Months? 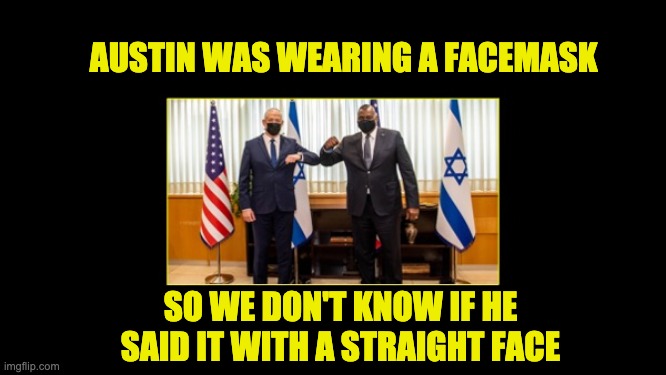 Defense Secretary Lloyd Austin is a man of honor who served admirably in the Army for over four decades, which is why I was surprised with what he said to Israeli Defense Minister Benny Ganz on Sunday. Lloyd Austin Israel

Today, I was tremendously pleased with our discussion on a number of security issues, which are important to our two countries. And I wanted to convey the Biden-Harris administration’s strong commitment to Israel and the Israeli people.

As a major strategic partner for the United States, our bilateral relationship with Israel, in particular, is central to regional stability and security in the Middle East. And during our meeting, I reaffirmed to Minister Gantz, our commitment to Israel is enduring and it is ironclad.

The Defense Secretary’s commitment to Israel may be ironclad, but based on his actions and those of his administration during his first three months as POTUS there is no way Austin’s boss feels that way:

These are just a few of the examples proving that President Biden has less than an ironclad commitment to Israel.  This raises the question is General Austin lying or has President Biden blown so much smoke up the Defense Secretary’s arse that he can ignore what Biden has done during his first three months in office?

Note: Some will disagree with the above because Austin got agreement from Benny Ganz..Ganz even thanked Biden/Harris– he had to.  Just as with very few exceptions, members of the Israeli government never publicly said anything nasty about Barack Obama and even praised him at times during his two terms of Antisemitism and Israel-hatred as POTUS, publicly members of the Israeli government will only say nice things about Biden–his policies are already bad for the Jewish State and pushing back against Austin would only make things worse.