The Real Deal With Steele, An Actual BOMBSHELL From House Testimony Of Lisa Page 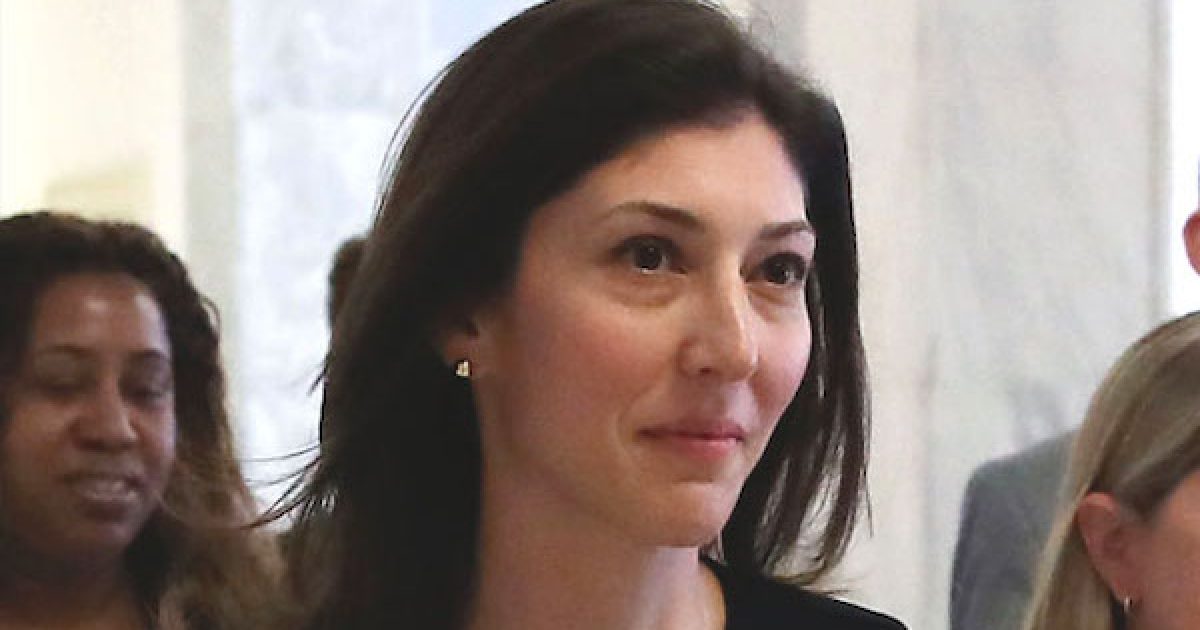 Last week saw three significant new stories about the Russiagate melodrama.  One of them, written about here, involved a bizarre claim that FBI officials, alarmed at former Director James Comey’s firing in May 2017 and apparently unable to ask their superiors basic common-sense questions about it, launched a counterintelligence probe of the president to figure out why he did it.

Another story is one I will address separately.  It relates to old allegations about Andrew Weissmann, currently Robert Mueller’s deputy on the special counsel team.

The third is the subject of this article.  Jeff Carlson, of the blog The Markets Work, was recently afforded the opportunity to review former FBI attorney Lisa Page’s closed-door testimony in the House of Representatives in July 2018 and provided a lengthy summary of it at The Epoch Times on 11 January.

There’s a lot to unpack from the Page testimony, and I commend Carlson’s article to you as must-reading.  It indicates, for one thing, that in August 2016, former CIA Director John Brennan had knowledge of the contents of the Steele dossier, apparently without any coordination that Ms. Page was aware of with the FBI – whose agent (presumably Michael Gaeta) was handling Steele as a source.

Representatives who questioned Page were able to reconstruct Brennan’s knowledge of the dossier’s contents from his interactions in August 2016 with Senator Harry Reid.  But Page was adamant that the cognizant counterintelligence officials in the FBI themselves didn’t know about the dossier and its contents until the following month.

Carlson flags this for particular interest, and he’s right to do so.  Page’s testimony bolsters the evidence that Brennan had a separate link to the dossier information.  That link may or may not have been through Christopher Steele (and indeed suggests that Steele’s and Brennan’s source(s) mapped back to the same ultimate source(s); e.g., the fertile minds at Fusion GPS, along with former British intelligence officials and Clinton cronies Sid Blumenthal and Cody Shearer.

But there’s a more bombshell-y revelation from the Page testimony.  The set-up for its significance is a collateral revelation about Page’s career path, which is that she worked for Bruce Ohr at the Department of Justice for at least five years, before her move to the FBI.  I haven’t found an exact date for that move, but one (somewhat dubious) aggregation website says it was in 2014.  Andrew McCabe, for whom she worked during the period of her notorious text correspondence with Peter Strzok, was appointed a deputy director of the FBI in January 2016.

According to her testimony last July, Page met Bruce Ohr’s wife Nellie at an office event hosted by the Ohrs in 2011.  It appears that Page’s time working with Bruce Ohr ran from as early as 2009 up through 2014 or 2015.

Ohr’s DOJ portfolio in that period I recounted in a December 2017 article on his connection with Steele (which went back to at least 2006).

In an article on Robert Mueller’s special counsel team in June 2017, Wired described Lisa Page in the following terms:

[I]t appears [Mueller] has recruited an experienced Justice Department trial attorney, Lisa Page, a little-known figure outside the halls of Main Justice but one whose résumé boasts intriguing hints about where Mueller’s Russia investigation might lead. Page has deep experience with money laundering and organized crime cases, including investigations where she’s partnered with an FBI task force in Budapest, Hungary, that focuses on eastern European organized crime.

The organized crime task force in Budapest was the FBI/DOJ European hub for intelligence and law enforcement operations against the major syndicate crime organizations in Europe, especially those of Eastern Europe and the former Soviet Union.  (See my December 2017 article.)  This is thus reportedly a realm in which Page had extensive experience, and by implication, connections.

Meanwhile, Christopher Steele has long been touted as a critical FBI source for one of the most significant organized-crime cases handled by the FBI and DOJ in this century: the FIFA (soccer organization) conspiracy and bribery case, for which indictments were brought in 2015.  Mike Gaeta, assumed to be Steele’s FBI handler for the dossier contributions in 2016, worked the FIFA case.

And the case was worked, according to the Justice Department’s announcement of the indictments, in coordination with the Office of International Affairs and Organized Crime and Gang Section at DOJ – that is, with the office Bruce Ohr headed for a big chunk of the time when the FIFA case was under investigation (2010-2015).

Steele became an FBI informant on the FIFA case in 2010, according to all the reporting to date.  It was the reputation he is supposed to have built with the FBI in that major case that made him a credible source for citation in the FISA application in 2016 for surveillance of Carter Page.  Steele was also in relatively frequent communication with Bruce Ohr in 2016, evidence of the continued relationship that had been ongoing since 2006 or before.

This is a picture of a high-profile informant who came in the front door at both agencies and was well known to Bruce Ohr, the man Lisa Page worked with for more than five years.  This informant cooperated with a criminal investigation on which Ohr’s office had provided assistance to the FBI, while Page was working in that office.

So it is extraordinary to discover this next passage in Lisa Page’s testimony from 13 July 2018, when she was asked about the events of August 2016, and pressed as to whether she knew Steele was talking to Fusion GPS or others outside the FBI (italics added):

Rep.: “Were you aware that Christopher Steele had conversations or multiple conversations with Fusion GPS and others outside of just working special intel for you?”

With this response, Lisa Page seems to put in question the basic narrative about Steele’s longstanding value to the FBI.

It may undoubtedly be the case that in-house attorneys for the investigative branches of the DOJ and FBI don’t know the actual identities of all of the agencies’ confidential sources.  But Steele was supposed to have been a particularly valuable source, on whom the U.S. agencies placed particular reliance.  His expertise was in Russian government, business, organized crime affairs, and the nexus between them – the nexus, in other words, of the suspicions in both the UK (where Steele was hired as an investigator by the football association) and the U.S. that the World Cup venues for 2018 and 2022 had been selected through a bribery operation.

The FIFA case has explained throughout the Russiagate narrative Steele’s prominent role in the “Russia-Trump” investigation and the personal links and trust he had with the DOJ and FBI.  The connections Steele provided insight on in working FIFA were ones with which Bruce Ohr’s office was familiar.  And Lisa Page would have had at least some expert knowledge of them, given the background outlined for her in the Wired blurb, even if she didn’t perform dedicated work on the FIFA case during her time with Ohr.

So it seems quite curious that she had “never heard of Steele in all her life” before the cognizant CI officials at the FBI became aware of the Steele dossier in September 2016.

We can note as well that there would have been no need to severely limit in-house knowledge of Steele’s identity in the DOJ or FBI since he was not a covert, embedded source for the FIFA case, but a private intelligence professional offering career expertise and what were essentially hearsay tips.  Steele was, in any case, a long-time associate of Ohr, and thus no mystery to the Ohr corner of DOJ.

Notably, GOP congressmen who questioned Page said they found her more credible and forthcoming than they found Peter Strzok to be.  We could assume she was lying about whether she’d ever heard of Christopher Steele, but there’s nothing to suggest that she was.  The members of Congress thought she was credible – and a moment’s reflection tells us she had no apparent motive to lie about Steele.

If anything, there might have been a motive to positively affirm the party line about Steele’s individual reputation and previous links with U.S. law enforcement, on which the integrity of the FISA application process hinges.  But instead of making such an affirmation, Page bluntly said she’d never heard of Steele at all.

What’s the deal with Steele?

This is a data point we shouldn’t drop.  At the very least, it puts a question mark over the Steele persona in the Russiagate catechism.

In a broader sense, it suggests the possibility that the whole narrative needs rewriting.  If Steele wasn’t really a Known Ranger with a bagful of magic intelligence, that shifts the locus of motivation for Crossfire Hurricane back toward John Brennan’s instigation (notably, not for the first time).

But it does more than that.  It also raises the question: what role has Steele been playing?  I am by no means the only analyst who has found the dossier to be frankly absurd as an “intelligence” document.  Was Steele merely a “beard” of some kind?  Did he perhaps provide as little useful substance in the FIFA case as he did with the 2016 dossier?  Is there something besides the substantive intellectual contribution he makes that has written him into the narratives of one or both cases?

Analyst Yaacov Apelbaum had this to say about Steele, in response to a reader comment on a very interesting, related treatment at his blog The Illustrated Primer in March 2018:

For some reason, it seems that Steele is always the first one (and his sidekick Luke Harding is always not far behind) at every major crime scene. He always manages somehow to solve the case in record time and walk away smelling like a rose. I mean, what are the odds that one person would be randomly involved in so many major international cases like the FIFA corruption, Litvinenko’s poisoning, Skripal’s poisoning, and the Dossier composition (just to name a few…). Kind of reminds you of the arson investigator that turns out to be the arsanist [sic].

Regarding the dossier itself, Apelbaum, concluded in his text, based on an in-depth forensic analysis of writing styles and other factors, that Steele didn’t write it.

When it comes to the bulk of the literary work, Simpson, Jacoby, Baumgartner and Ohr likely authored it and Steele—if he did any actual writing—just formatted the reports in order to tag them with his scent and make them look spyish by using terms like “Source X” and redacting some phrases.

The whole Apelbaum discussion is worth the time to absorb, although it’s very long.  Little of it was news to me when I first came across it last year, but the analysis is extremely well done and fascinating.  Appelbaum may well lay his finger on Steele’s value most accurately with this characterization, also down in the comments section:

Steele and Simpson/Jacoby have been collaborating on Trump/Russia going back to 2009. [Noted, incidentally, in my December 2017 article linked above. – J.E.]

Also, there is a large Hakluyt/Orbis ‘commercial intelligence’ network in the US that regularly services political and federal agencies and has the power to summon Nazgûls the likes of John Brennan. So Steele is not the new kid on the block, he has been doing this type of work long before 2016. This is also why he has such a cozy relationship with the brass at the DOJ and state.

We have referenced Hakluyt before, and the connection of John Brennan with the shadowy pantheon of the retired British intelligence service.  The media narrative keeps driving us toward a focus on the FBI, as it did just this past week with the New York Times story on the fright-prompted investigation of Trump.  But Lisa Page’s little testimony bomblet suggests that a carefully fostered misconception about Steele may have had us focusing in the wrong place for too long.