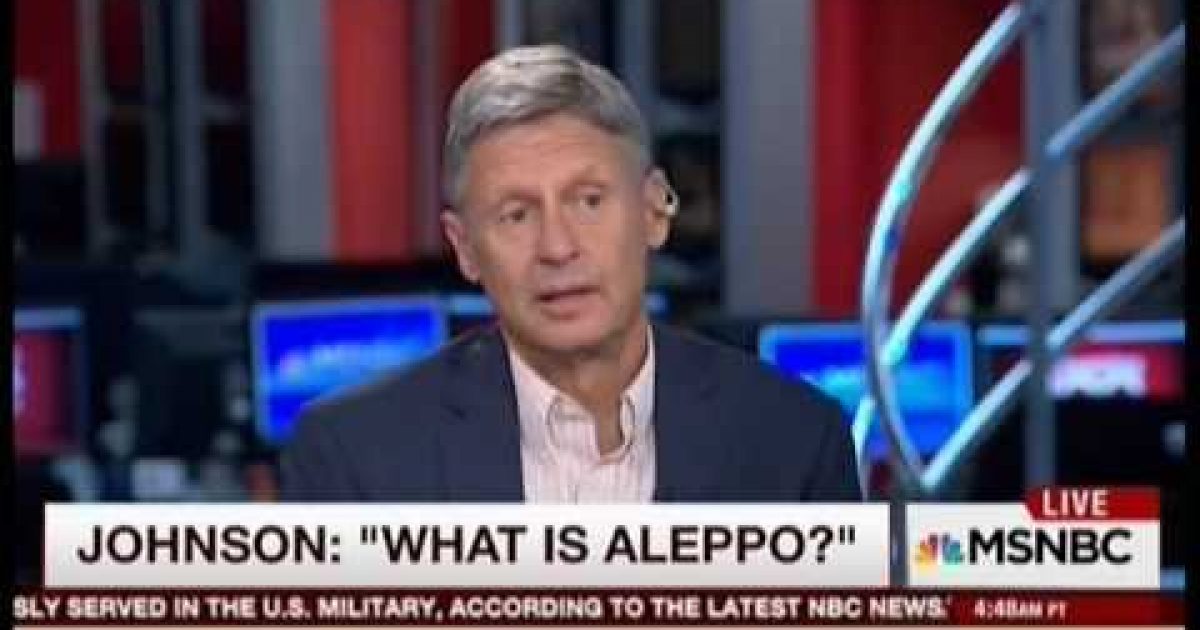 If Libertarian candidate for President Gary Johnson ends up with enough support to participate in the presidential debates he’d better take a remedial class on major world crises. Thursday on Morning Joe, Johnson drew a blank when asked (video below) what he would do with Aleppo.

Perhaps Johnson forgot to pay his cable bills, and hasn’t watched the news in a few years. because the Aleppo region is the center of the Syrian Civil War and much of the refugee crisis.  Aleppo has become almost a mini-world war.  Russian warplanes are bombing from the sky.  Iranian-led militias with soldiers from Iraq and Lebanon are on the ground fighting Syrian rebels backed by the United States, Turkey, Saudi Arabia and Qatar, ISIS is moving in on the territory, and most tragically, innocent civilians are being killed and maimed

But when asked “What would you do if you were elected about Aleppo?” by Morning Joe’s Mike Barnicle the former New Mexico governor looked stunned. “And what is Aleppo?” Gary Johnson answered.

An incredulous Barnicle said, “You’re kidding,” to which Johnson answered that he was not.

Barnicle explained that Aleppo is “the epicenter of the refugee crisis” in Syria, giving Johnson enough information to finally answer the question.

Barnicle explained that Aleppo is “the epicenter of the refugee crisis” in Syria, giving Johnson enough information to finally answer the question.

“Okay, Got it. Well, with regard to Syria, I do think that it’s a mess. I think the only way that we deal with Syria is to join hands with Russia to diplomatically bring that at an end but when we’ve aligned ourselves with — when we have supported the opposition, the Free Syrian Army, the Free Syrian Army is also coupled with the Islamists, and then the fact that we’re also supporting the Kurds and this is, it’s just a mess. And this is the result of regime change that we end up supporting and, inevitably, these regime changes have led to a less safe world.”

Scarborough followed up with Johnson, asking him if he really thinks “that foreign policy is so insignificant that somebody running for president of the United States shouldn’t even know what Aleppo is, where Aleppo is, why Aleppo is so important?”

Johnson’s gaffe reminded me of the famous Gerald Ford gaffe, when he said during a debate with Jimmy Carter. “There is no Soviet domination of Eastern Europe.”

I doubt highly that Johnson has no idea about Aleppo, but his gaffe compounds the perception that the isolationist leanings of the libertarian candidate is not the proper world view for a commander-in chief.

But then again as Jamie Weinstein points out, Barack Obama’s former ambassador to Iraq doesn’t really know what Aleppo is either:

#ProTip: Dont use FP credentials to criticize politician for not knowing what Aleppo is & then say it’s ISIS capital pic.twitter.com/aYPTcCWQOq