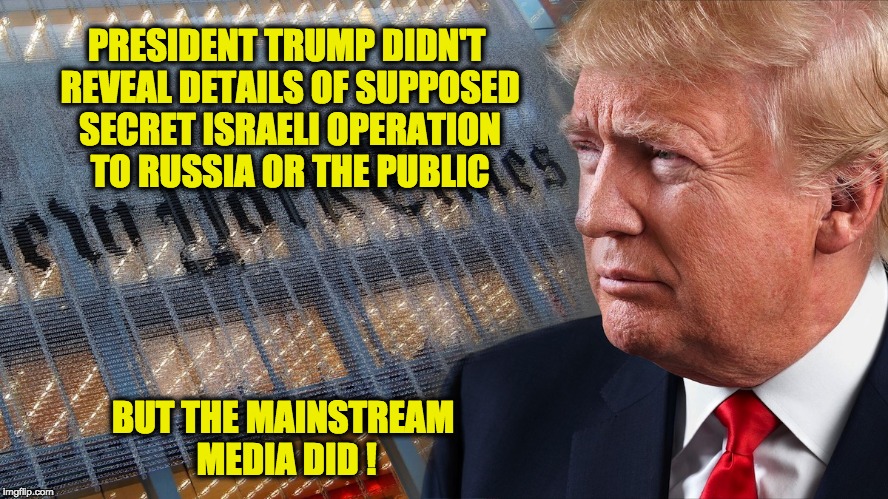 It’s time to call a halt to the leak problem from the U.S. intelligence community.  This is beyond a “leak problem.”  It is spilling over into outright sabotage of America’s national interests, all in the quest to bring President Trump down. The original Washington Post story supposedly revealed President Trump shared intelligence with the Russians, but  the next day the NY Times and the Wall Street Journal revealed specifics of that intelligence that Trump wasn’t accused of sharing with the Russians.

After Monday’s story by the Washington Post was repudiated by H.R. McMaster, Rex Tillerson, and Dina Powell, McMaster made additional comments Tuesday morning to clarify exactly how false the story was.

The gist of the original story was that President Trump, in speaking to the visiting Russians last week about an ISIS “laptop plot,” revealed highly classified details that would have allowed the Russians to determine what the source of some of the intelligence was.  The WaPo article made reference to the sensitive intelligence of a foreign ally, and to Trump disclosing the city in which the intel was gained. (N.B. — WaPo could only have gained this impression from people who weren’t there, but who are bound by oath to not reveal exactly the sort of intelligence they allege Trump revealed.)

Tuesday morning McMaster stated in no uncertain terms that not only did Trump not make these disclosures — Trump didn’t even know the source of the intelligence, or the city it was obtained in.  Thus, the president could not possibly have exposed the information as alleged in the WaPo piece.

National security adviser H.R. McMaster on Tuesday said President Trump did not jeopardize intelligence assets by revealing highly sensitive information to Russian officials, adding that Trump did not know where the intel came from. …

McMaster said Trump could not have endangered national security because he did not even know the source of the information he discussed.

“The president wasn’t even aware of where this information came from,” he said. “He wasn’t briefed on the source.”

There is nothing unusual about this latter point.  Presidents are selective about when and why the source of intelligence matters to them.  Most of the time, they have too many other things to think about to probe the matter.  They understand the scope and general nature of national capabilities, but it’s only in very specific cases that they care about sources — or that their officials highlight sources to them, for some reason.

In this case, General McMaster made clear that Trump didn’t know the details WaPo‘s source alleges he exposed, and therefore, he couldn’t have exposed them.

This is good news.  Bottom line:  Trump didn’t expose sensitive information about intelligence sources and methods.  (Keep that in mind.  Trump has not exposed anything.)

But the leakers who ply the mainstream media with sensitive national intelligence in order to defame Trump have now come out to expose that information themselves.

In the New York Times Tuesday morning, an article alleged that Israeli intelligence was the source, citing “a current and a former American official familiar with how the United States obtained the information.”  The NYT article then went on to blithely speculate about how that disclosure could damage U.S. relations with Israel — and, my goodness, just before Trump’s first visit there as president, to boot.

Hard on the heels of the NYT piece, the Wall Street Journal came out with one stating even more categorically that the source was Israel.  Just so you won’t miss it, apparently, the authors made “Israel” the very first word of the story:

Israel provided the U.S. with the classified information that President Donald Trump shared last week with Russian officials, according to officials with direct knowledge of the matter.

The intelligence came from a particularly valuable source of information about the Islamic State terrorist group’s ability to build sophisticated explosives that could evade aviation-security measures and be placed on aircraft, these officials said. The source of the information was developed before Mr. Trump’s election in November, they said.

And, of course, the WSJ piece goes on to speculate about how this will damage U.S.-Israeli relations.  Both pieces (NYT and WSJ) also allude to the damage it will do to America’s intelligence partnerships with all our allies.

If you don’t think at this point that there’s a “deep state” or “shadow government” trying to sabotage Trump, well, bless your heart.  The actors in the deep state — if it’s actually true that Israel is the source of the intelligence about the “laptop plot,” and that they had direct knowledge of that — have just committed an indisputable felony by telling that to the media.

If America’s relations with Israel, and with our intelligence partners in general, are damaged out of this, it’s the leakers who are at fault.  That could not be established more clearly.

I don’t want you to forget that it’s the responsible officials in the government who are at fault here.  The media complicity is disgusting, but the clear felony is what the government officials did.

It’s the same felony they committed, in fact, by revealing national intelligence information about monitoring the Russian ambassador’s phone calls, and unmasking Michael Flynn.  But in this case, the sanctimonious chatter about “damage to national interests” is on a larger scale.  And the potential for such damage is indeed great.  The leakers have created that potential.

The way to get ahead of this severe problem for the rule of law and the proper functioning of government is for Trump to have the leakers identified, and prosecute them to the fullest extent of the law.  It’s obvious that Congress is paralyzed by sheer sclerosis, starting with terror of the media.  It’s also obvious that there are so many Obama holdovers left in the federal bureaucracy, it will be hard for the Trump administration to find people who can be trusted.

Adam Kredo had a must-read post on that at the Washington Free Beacon on Monday.

Trump administration insiders likened the problem to a game of whack-a-mole, a children’s game in which players must hit a group of moles as they pop out of their holes.

But there appear to be trustworthy officials still in DOJ and the FBI.  Fear of how the media and Democratic leaders will spin it must not stop Trump from identifying the leakers and prosecuting them.  I think Trump will have to reach past the major MSM outlets to make his case to the people.  But there is a legitimate, law-based case to be made, and a path of law to follow.  Revealing national secrets and imperiling national interests is what the leakers have done — not the president.

Pretending that going after those leakers might be illegitimate, as Trump’s opponents are likely to do, would be a supreme exercise in self-deceit, at best.  At worst, it would clearly be the argument of a faction with only evil intentions, determined to destroy the rule of law and thwart the legitimate operation of government.