Rep. Lauren Boebert To Democrat Who Criticized Her Gun Display, ‘Do Your Dishes, Hon’ 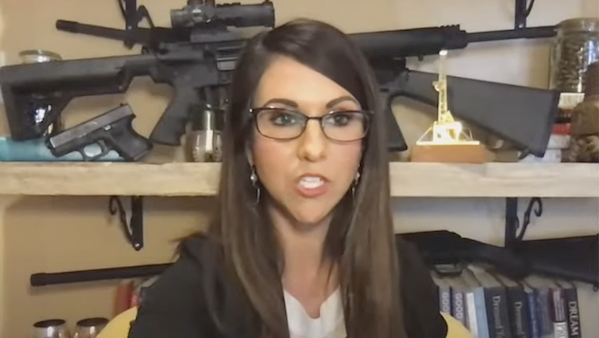 From the moment she went to a Beto O’ Rourke rally to tell him, “I was one of the gun-owning Americans who heard you speak regarding your ‘Hell yes, I’m going to take your AR-15s and AK-47s.’ Well, I’m here to say, ‘Hell no, you’re not,’” I have been a big fan of Lauren Boebert (R-CO). And now that she’s won a congressional election, she continues to impress.  Rep. Boebert is still a defender of the Bill of Rights, and she doesn’t take nonsense from those who would destroy our rights. When Democratic party colleagues slammed her gun display after seeing it behind her during a Zoom call, she gave them hell in her own way.

Rep. Jared Huffman (D-MO) claimed her display of guns made him concerned for his safety once the pandemic subsides and Congressional panels can meet in person.

“If somebody wants to have a shrine to their gun fetish as a Zoom backdrop in their private life they can do that,” Huffman said. “But this is our ‘hearing room,’ and at some point we will get past the COVID epidemic, and we’ll all start showing up in person, and our safety and our ability to conduct business civilly without feeling threatened is a relevant consideration, unfortunately.”

Is Huffman under the assumption she will be toting all of those guns with her to Congress?

Another Democrat lawmaker who took umbrage with Lauren Boebert’s display was Rep. Katie Porter (D-CA), who said the guns were more dangerous than her kitchen sink.

“I always thought my dirty dishes piled up and accumulating bacteria were the most dangerous thing in a Zoom background,” scoffed Porter on Twitter.

I always thought my dirty dishes piled up and accumulating bacteria were the most dangerous thing in a Zoom background… ??? #SafeStorage pic.twitter.com/uveXvGfafu

As part of the tweet, Rep. Porters tagged ‘Room Rater,’ an account known for judging people’s living room and office spaces. That group didn’t let her down, rating Boebert’s room as a zero out of ten and claimed the GOP Rep was “fascist.”

“Unsafe gun storage is no laughing matter,” they wrote. “Is this Fascist fraulein really the best Colorado’s 3rd [congressional district] can do?”

Unsafe gun storage is no laughing matter. Is this Fascist fraulein really the best Colorado’s 3rd CD can do? 0/10 @laurenboebert pic.twitter.com/BjNQpWoiqs

Boebert isn’t the type to just sit back and accept unfair criticism, and, as such, she fired back at Porter in epic fashion.

“It’s kind of alarming that she has so many dishes in her sink collecting bacteria,” Boebert said when asked to comment during a Fox News interview. “Do your dishes, Hon.”

Boebert also took aim at Huffman, calling him a “creep” and criticizing “the left’s disdain for the Constitution,” which she said “was on full display” during the committee meeting.

Lost in the Democrat pearl-clutching was that Boebert offered a strong defense of the Second Amendment during the hearing.

“We all took an oath to uphold and secure the Constitution, every single one of us,” she said. “Our first act as members of Congress was to take our oath of office, and please allow me to remind you a portion of that oath, the chair, and every other member here solemnly swore that we would support and defend the Constitution of the United States,” she added.

“The Second Amendment is very much a part of the Constitution of the United States.”

BREAKING: Rep. @LaurenBoebert gives an epic defense of the Second Amendment with a savage backdrop ? pic.twitter.com/AK0Ccx1usO

The GOP lawmaker went on to counter Huffman’s claims of a gun fetish by saying she is “busy fighting against the left’s real fetish for power and stripping Americans of their constitutional rights.”

Much of this post was first seen at The Mental Recession