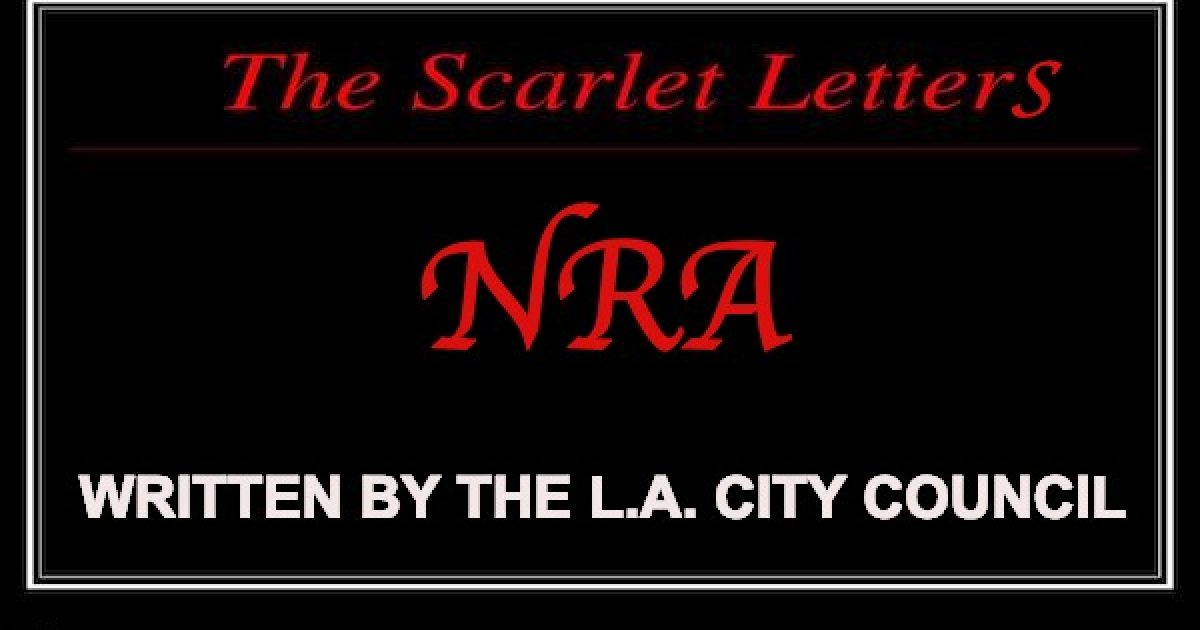 The City of Los Angeles has devised a new “Red Letter”  actually three letters, NRA, that will be used like Hester Prynne’s “A” to mark companies with “ties” to the National Rifle Association so others will shun them. However, those companies must tell the city if they have ties. Otherwise, they will not be able to do business with the La-La-land city government.

If you are unfamiliar with the literary reference, Hester Prynne is the main character of the classic Nathaniel Hawthorne’s novel, “The Scarlet Letter.” In the 1850 novel, Prynne was forced to wear a scarlet letter “A” for having a child out of wedlock. It is a classic tale of intolerance, guilt, scorn, social stigmatizing, judgment, romance, and religious zealotry.

In any case, the red letter “A” that Prynne is forced to wear is used to mark her as an evil person, one who should be shunned and that is what the City of Los Angeles plans to do with its new law. Since the novel became famous as one of America’s great tales, the “Red Letter” has been a symbol of stigmatism.

In that vein, the City Council has passed a new rule that would force companies to reveal any ties they may have had with the National Rifle Association as a requirement for being eligible to do business with the city.

The Los Angeles Times reported that council member Mitch O’Farrell crafted the ordinance in response to the wave of mass shootings in the U.S. The councilman described the NRA as a “roadblock” to gun law reforms.

The NRA isn’t a roadblock to gun law reforms, the fact that governments haven’t come up with a gun law that would actually stop mass shootings, without hurting the law-abiding gun owners.

Sensibly, the NRA has already threatened to sue the city for the absurd, un-American rule.

Attorneys for the NRA have threatened to sue over the ordinance, the Times reported. One lawyer for the organization told the news outlet that the law could prompt those with ties to the organization to drop their affiliation out of fear it could cost them business.

“Politicians are free to disagree with the NRA’s pro-freedom, firearm safety, and self-reliance message, but they aren’t free to censor it — as this would do when NRA supporters drop their NRA memberships for fear of losing their livelihood from being on this blacklist,” NRA attorney Chuck Michel said. “This is modern-day McCarthyism, and my clients are confident no judge will let it stand.”

This is exactly right. No government has a right to red letter a legal business because it opposes a Constitutional right!