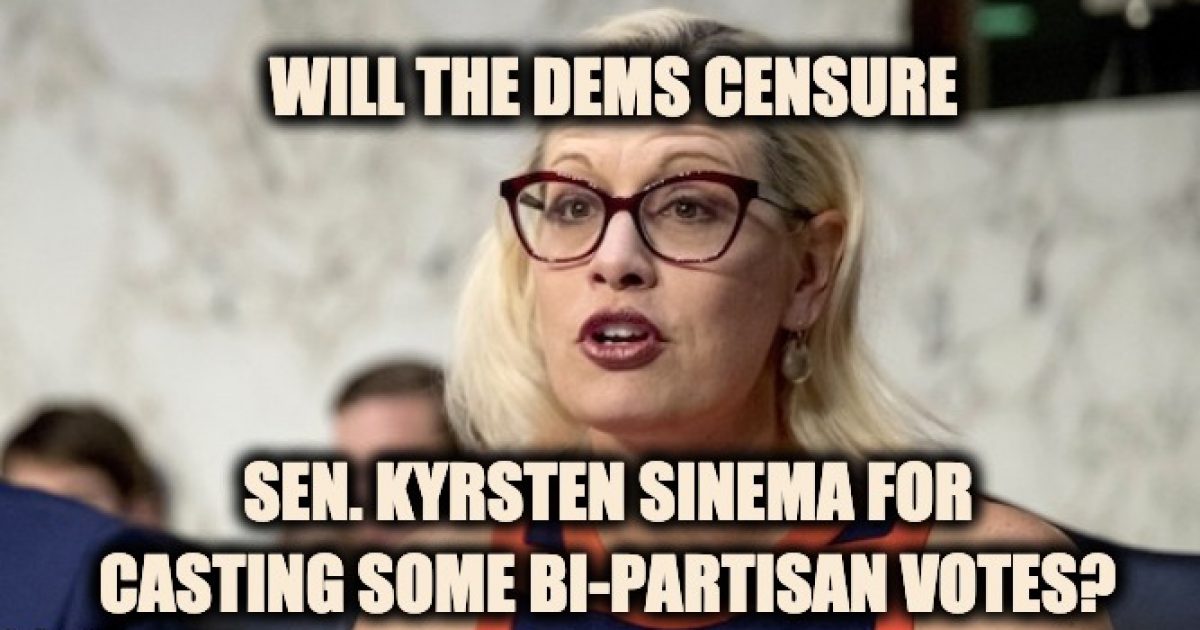 Who would have thought that the Democrat who filled the seat left by Jeff Flake would be more supportive of the Trump agenda than her predecessor?

Progressives within the Arizona Democratic Party are upset that Senator Krysten Sinema cast some votes for Pres. Trump by confirming nominees and opposing the attempt to reinstate “net neutrality.”

Sen. Kyrsten Sinema is facing a censure vote from the Arizona Democratic Party, brought by progressives who deem her politics too accommodating to President Donald Trump at the expense of Democratic values.

Sinema, D-Ariz., built a moderate political brand during her three terms in the House of Representatives, which has extended to her early days in the Senate. According to the FiveThirtyEight Trump Tracker, she has opposed Trump while in the Senate 81% of the time. In the House, she supported Trump’s agenda 54% of the time.

While Sinema’s political centrism has earned her Republican support, it has grated on progressives — some of whom silently protested her during a state fundraising dinner in downtown Phoenix. Democratic state committeemen will consider the resolution on Saturday, at the Arizona Democratic Party’s quarterly meeting.

Democrats specifically cite her votes to confirm Attorney General William Barr and David Bernhardt, Trump’s nominee for Secretary of the Interior, as well as her opposition to the reboot of net neutrality.

Sen. Sinema’s “problematic” votes have frustrated progressive Democrats who feel that her bipartisanship is interfering in pushing forward their party’s ever-leftward agenda. The state coordinator for Progressive Democrats of America, Dan O’Neal, says that the move to censure Sinema is intended to push her to the left.

“Here’s the thing: We really support Kyrsten Sinema, we want her to succeed, we want her to be the best senator in the country,” O’Neal said. “But the way she is voting is really disappointing. We want Democrats to vote like Democrats and not Republicans. “

The wording of the censure has yet to be finalized.

It’s unclear if the censure vote will pass, though the Arizona Democratic Party chairwoman, Felecia Rotellini, says that it will be heard and discussed.

What does that even mean now? Are Democrats the Nancy Pelosi/Chuck Schumer Democrats or the Democratic Socialists of The Squad and Bernie Sanders/Elizabeth Warren?

Also, does that mean that the reverse is true? Should Republicans vote like Republicans, or should they be “bipartisan” and “reach across the aisle” sometimes?

Or — and here’s a wacky idea — that elected officials actually represent their constituents?

I’m sure that Mr. O’Neal is completely consistent on this sort of partisanship, right?

Don’t want any of those damned John McCain-types wandering around D.C.! Well —other than Mitt Romney who we’re stuck with for another four years.

The Democrat view of “bipartisanship” means that Republicans cave to Democrats and, in the Trump era, #Resist.

Imagine thinking that confirming nominees based on their credentials is caving to an administration.

Liberalism is a mental disorder, y’all!