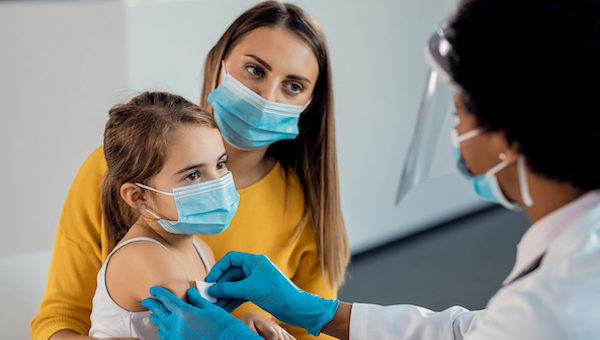 We’re told to “trust the experts” when it comes to COVID… but what happens when experts disagree? This doctor is saying something completely antithetical to the stuff spewed by Dr. Anthony Fauci. kids shouldn’t get COVID vaccine

He said that there is no reason to vaccinate children for SARS-CoV-2 despite the push from the White House and the CDC, Democrat governors, vaccine companies, teachers’ unions, terrified adults, and the Diminutive Authoritarian Smurf, Dr. Anthony Fauci.

Dr. Paul’s thoughts on this are based on his study of the data. He says that there is molecular and biological evidence showing that children should be considered “already vaccinated” from COVID and do not need to get the jab. He says that children are effectively immune from the virus, and giving them vaccines only introduces a possibility of harm due to adverse effects of the vax for a virus that the Infection Fatality Rate (IFR) is 0.003% for anyone under the age of 19.

He cited four pieces of evidence to support his position.

Now, this isn’t some rando calling a talk radio show with his own “research” — “Dr. Paul” is one of the top experts in medical data analysis whose focus is evidence-based medicine and data analysis. He was an advisor for the World Health Organization (WHO) and on President Trump’s COVID-19 Task Force. (He shared some thoughts on that, too, by the way. See the end of the article for that little gem on his thoughts on Trump’s other COVID advisors, including Dr. Fauci.)

Now that his credentials are out there front-and-center, here’s what Dr. Paul had to say:

No child in America must be vaccinated with these vaccines. None.

And we must consider them already immune and actually vaccinated. Why? Children? The infectious fatality rate is close to zero for children, close to zero, statistical zero. Children don’t readily acquire it; don’t readily spread it. They do not get severely ill, readily, and they do not die and that is not me making this up.

This is data, and the reality is, I looked at the evidence to try to understand, is there molecular or biological explanation? And what I found was Patel and Bunyavanich. They published some research, two separate papers last year in JAMA that showed that in the nostrils of children and their nasopharyngeal passage lacks the number of ACE2 receptors that it does have.

That began to explain to us why children were at such low risk to begin with. Children just do not have the apparatus to become readily infected and readily transmit, and that’s one piece of the puzzle. I also looked at some research by Loske, who also showed that the airways in children already primed to sense this virus and had a much stronger early innate response to the SARS-CoV-2.

That was point two for me as to why children were at such risk. I looked at research by Yang, and Yang told us that the blood that they collected from kids before SARS-CoV-2 started had the type of B-cell antibodies in it that showed that they were exposed to prior common cold and give them some protection.

That was potent, potent data that the medical community knows. CDC understands. There’s also research by Wise and Faber that told us that the T-cells in children when they looked at it, they were so naive and so untrained that that gave them an understanding of why children’s immune system responded.

Those four pieces of evidence tell me from a biological and a molecular point of view — I’m not even talking about the Danish studies and the French articles that showed children didn’t spread. I’m not talking about the Ludvigsson study in Sweden that showed of two million Swede kids, no cases of death.

You can read the transcript or listen to the entire segment with Dr. Paul on Clay & Buck’s website here.

Dr. Paul posted an article on TrialSite News detailing the molecular and biological reasons that children shouldn’t be vaccinated for COVID. In it, he included a fifth reason why kids shouldn’t be forced to get the vax — they aren’t significant vectors of spread. Dr. Paul says that a study by Galow shows that children don’t really spread the virus to other children, it’s adults that spread it to kids.

It’s quite a bit for the layman to take in, and it’s completely counter to what all of the “experts” that get a whole lot of airtime are saying.

But it’s important to hear experts like Dr. Paul and Dr. Jay Battacharyia — co-author of the Great Barrington Declaration and COVID advisor to Gov. Ron DeSantis — who are saying that the “mitigation measures” that are championed by Dr. Fauci from the NIH and Dr. Walensky of the CDC don’t work and have never worked to “slow the spread” of this virus.

Dr. Paul had some scathing words about Dr. Fauci at the beginning of the segment:

"Children have no opportunity for benefit from these vaccines, only potential for harm. We must not allow our children to be vaccinated." Dr. Paul Alexander #covid #vaccinehttps://t.co/Ls4f3yjMaV pic.twitter.com/mVnDquxI1Y

Dr. Paul said that the “medical experts” that were advising Trump and those that are advising Biden are just as bad.

Yes, he was the boss, but he needed their technical input. And they failed him. They misguided him, and they even misguided whoever advises Biden, because this present administration is a complete failure.

Dr. Paul had caused quite a stir when he called the show last week and dropped a bucketload of COVID info on Clay & Buck and the listeners.

Let’s hope that he becomes a regular guest.