Do You Hate Little Warm Puppies? 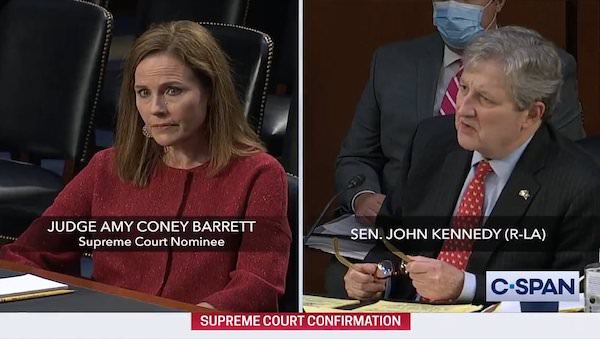 What nonsense!  Two days of Amy Coney Barrett being grilled by the senate judiciary committee. If the questions were about her qualifications for the supreme court it would have been less painful for the American people. But most of the questions coming from the opposition were repetitive “gotcha” questions–trying to get the Judge to discuss upcoming cases despite knowing that she wasn’t allowed to answer those. At other times they tried to portray Judge Barrett as a racist, and of course, there was the now-infamous question from the mentally challenged Senator from Hawaii, “Since you became a legal adult, have you ever made unwanted requests for sexual favors, or committed any physical or verbal harassment or assault of a sexual nature?” sen. Kennedy mocks democrats

The final Democratic inquisitor was the junior senator from California/Democratic Party VP candidate; Kamala Harris. In between presenting her campaign talking points, Harris tried to imply that Amy Coney Barrett was a racist and that she didn’t like science. Harris even asked  “Do you accept that Covid-19 is infectious?  Perhaps Harris forgot (or didn’t care) that Judge Barrett was a victim of Covid.

Following Harris. was the final Barrett questioner, Sen. John Kennedy from Louisiana. He found a way to rip Harris’ “gotcha” questions with a series of his own questions intended to make fun of the stupidity coming from the left.

Mediaite reported on the exchange between Kennedy and Barrett:

“Let’s try to answer some of Senator Harris’ accusations,” Kennedy started. “Are you a racist?”

Barrett said, “I am not a racist, Senator Kennedy.”

You sure? Kennedy went on to ask, “Do you support in all cases corporations over working people?”

“I do not, I think if you look at my record, you will see cases in which I’ve decided for plaintiffs, not corporations,” Barrett responded.

Kennedy asked, “Are you against clean air, bright water, and environmental justice?”

“I am not against any of those things,” Barrett said. “Those are policies that the Congress has pursued in many statutes and I think we all reap the benefits of when those statutes work.”

Barrett responded affirmatively to both of those.

Barrett laughed and said she doesn’t.

Here’s a video of the questioning.

Judge Barrett: "I do not hate little warm puppies." pic.twitter.com/Ta0Kycge85