Day After His Release From Jail Due to COVID-19 Fears, Inmate Commits Murder 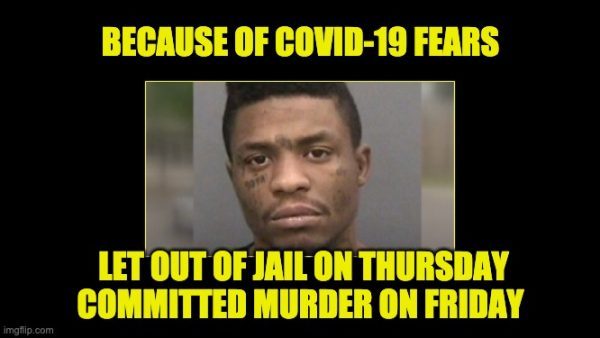 On March 13, Joseph Edwards Williams was arrested in Florida for possession of heroin. On March 19, Williams was released from jail due to fears of further coronavirus spread.

On March 20, Williams was arrested again. This time, for   proving that Joe Kenda was correct when he said, “Prison is gladiator school. You learn how to sharpen your skills as a bad guy.”

A Florida State Judge, ” authorized the local sheriff ‘to release any pretrial detainee arrested for a municipal or county ordinance violation, a misdemeanor offense, a criminal traffic offense, or a third-degree felony offense.'”

“The order was drafted in an effort to lower the risk of the spread of COVID-19 within the Hillsborough County detention facilities and to protect the inmates, deputies and civilian staff working within the jails,” the sheriff’s department said in a statement.

Therefore, Joseph Edwards Williams and 163 other inmates who were considered low-level offenders were released from Hillsborough County Jail on March 19. And the next day:

An inmate who was released from the Hillsborough County Jail in an effort to slow the spread of coronavirus is back behind bars and accused of committing second-degree murder the day after he got out of jail, deputies say.

They say he is connected to a March 20 shooting homicide in the Progress Village area. Deputies responded at 10:40 that night to several 911 calls about gunshots fired near 81st Street South and Ash Avenue. A man was pronounced dead at the scene.

I suppose he is no longer considered a low lever offender.

They should have known better than releasing someone who goes by three names, they usually turn out to be killers like Gary Leon Ridgway, John Wayne Gacy, Lee Harvey Oswald, John Wilkes Booth, and Mark David Chapman to name a few.

“There is no question Joseph Williams took advantage of this health emergency to commit crimes while he was out of jail awaiting resolution of a low-level, non-violent offense,” Sheriff Chad Chronister said in a statement. “As a result, I call on the State Attorney to prosecute this defendant to the fullest extent of the law.”

To be totally honest, this is Jail, not prison, Rather than letting accused criminals go free I don’t understand why they can’t find a way to keep them six feet apart.

Right now Williams is being held in jail, on a $250,000 bond. Hopefully. they won’t let him out again. Watch the news report about Williams below: