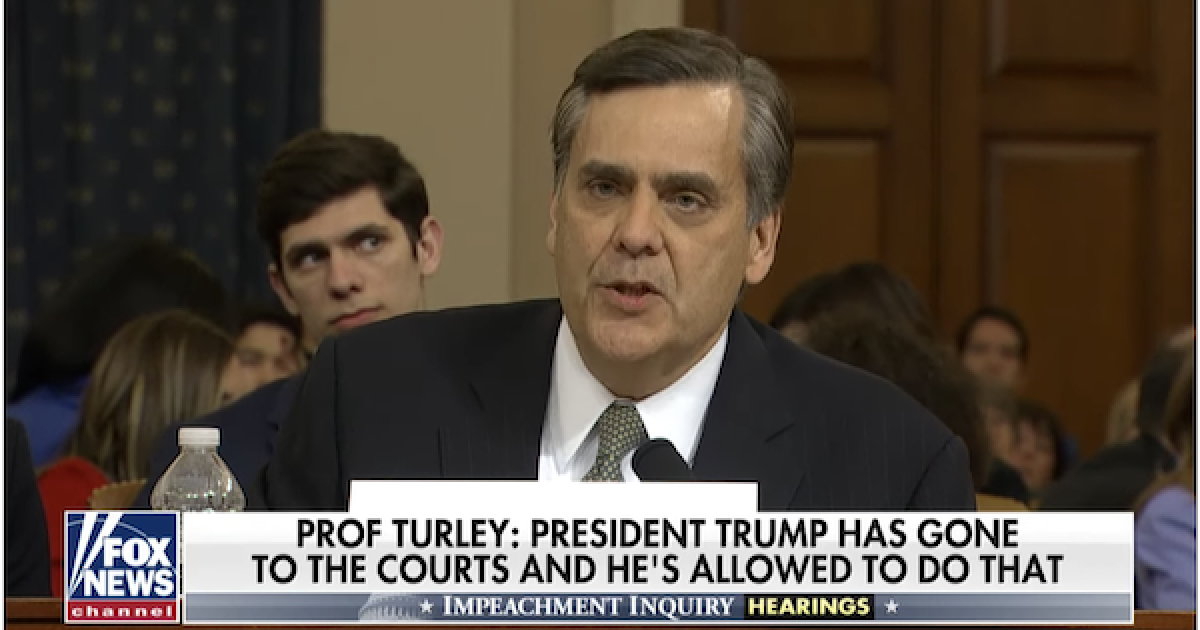 As the only witness allowed to be called by the Republicans on the House Judiciary Committee, Jonathan Turley slammed the entire process for its speed, lack of evidence that warrants impeachment, misuse of the bribery law, and that they’re looking to charge Trump with obstruction without fighting his executive privilege stance in the courts. Turley also warned that if they impeach Trump on these grounds it will lead towards the house using impeachment every time the majority doesn’t like a president.

There are two versions of the Turley opening statement, the one he gave orally to the committee, and his 53 page written statement which is embedded below.

Keep in mind that while the media describes Jonathan Turley as a Republican but he is a registered Democrat. At the beginning of testimony, he admitted that he didn’t vote for Trump and has been critical of President Trump’s policies. Then he went to rip the entire impeachment process, lecturing the committee about the weakness of calling the Ukraine mess bribery, and the fact that the Democrats are looking to charge Trump with obstruction of Congress for claiming executive privilege without going to the courts.

Recently there are some rulings against President Trump, including a ruling involving Don McGahn. … That’s an example of what can happen if you actually subpoena witnesses and go to court. Then you have an obstruction case because a court issues an order. And unless they stay that order by a higher court, you have obstruction. But I can’t emphasize this enough and I’ll say it just one more time. If you impeach a president, if you make a high crime and misdemeanor out of going to the courts, it is an abuse of power. It’s your abuse of power. You’re doing precisely what you’re criticizing the president for doing.”

I would like to start, perhaps incongruously, with a statement of three irrelevant facts. First, I am not a supporter of President Trump. I voted against him in 2016 and I have previously voted for Presidents Clinton and Obama. Second, I have been highly critical of President Trump, his policies, and his rhetoric, in dozens of columns. Third, I have repeatedly criticized his raising of the investigation of the Hunter Biden matter with the Ukrainian president. These points are not meant to curry favor or approval. Rather they are meant to drive home a simple point: one can oppose President Trump’s policies or actions but still conclude that the current legal case for impeachment is not just woefully inadequate, but in some respects, dangerous, as the basis for the impeachment of an American president. To put it simply, I hold no brief for President Trump. My personal and political views of President Trump, however, are irrelevant to my impeachment testimony, as they should be to your impeachment vote. Today, my only concern is the integrity and coherence of the constitutional standard and process of impeachment. President Trump will not be our last president and what we leave in the wake of this scandal will shape our democracy for generations to come.

Allow me to be candid in my closing remarks because we have limited time. We are living in a very period described by Alexander Hamilton [in the Federalist paers]  a period of agitated passions. I get it. You are mad. The President is mad. My Democratic friends are mad. My Republican friends are mad. My wife is mad. My kids are mad. Even my dog is mad . . . and Luna is a golden doodle and they are never mad. We are all mad and where has it taken us? Will a slipshod impeachment make us less mad or will it only give an invitation for the madness to follow in every future administration?

He doesn’t believe the Trump/Zelinsky phone call was proper, but it doesn’t rise to the level of an impeachable act.

He points out that the Democrats were looking to impeach this president from the very beginning of his presidency:

No, it is wrong because this is not how an American president should be impeached. For two years, members of this Committee have declared that criminal and impeachable acts were established for everything from treason to conspiracy to obstruction. However, no action was taken to impeach. Suddenly, just a few weeks ago, the House announced it would begin an impeachment inquiry and push for a final vote in just a matter of weeks. To do so, the House Intelligence Committee declared that it would not subpoena a host of witnesses who have direct knowledge of any quid pro quo. Instead, it will proceed on a record composed of a relatively small number of witnesses with largely second-hand knowledge of the position. The only three direct conversations with President Trump do not contain a statement of a quid pro quo and two expressly deny such a pre-condition. The House has offered compelling arguments why those two calls can be discounted by the fact that President Trump had knowledge of the underlying whistleblower complaint. However, this does not change the fact that it is moving forward based on conjecture, assuming what the evidence would show if there existed the time or inclination to establish it. The military aid was released after a delay that the witnesses described as “not uncommon” for this or prior Administrations. This is not a case of the unknowable. It is a case of the peripheral. The House testimony is replete with references to witnesses like John Bolton, Rudy Giuliani, and Mike Mulvaney who clearly hold material information. To impeach a president on such a record would be to expose every future president to the same type of inchoate impeachment.

In this age of rage, many are appealing for us to simply put the law aside and “just do it” like this is some impulse-buy Nike sneaker. You can certainly do that. You can declare the definitions of crimes alleged are immaterial and this is an exercise of politics, not law. However, the legal definitions and standards that I have addressed in my testimony are the very thing dividing rage from reason.

Listening to these calls to dispense with such legal niceties, brings to mind a famous scene with Sir Thomas More in “A Man For All Seasons.” In a critical exchange, More is accused by his son-in-law William Roper of putting the law before morality and that More would “give the Devil the benefit of law!” When More asks if Roper would instead “cut a great road through the law to get after the Devil?,” Roper proudly declares “Yes, I’d cut down every law in England to do that!” More responds by saying “And when the last law was down, and the Devil turned ‘round on you, where would you hide, Roper, the laws all being flat? This country is planted thick with laws, from coast to coast, Man’s laws, not God’s! And if you cut them down, and you’re just the man to do it, do you really think you could stand upright in the winds that would blow then? Yes, I’d give the Devil benefit of law, for my own safety’s sake!”

Both sides in this controversy have demonized the other to justify any measure in defense much like Roper. Perhaps that is the saddest part of all of this. We have forgotten the common article of faith that binds each of us to each other in our Constitution. However, before we cut down the trees so carefully planted by the Framers, I hope you consider what you will do when the wind blows again . . . perhaps for a Democratic president. Where will you stand then “the laws all being flat?”

Below is a video of Turley’s opening presentation, and his written 53-page testimony