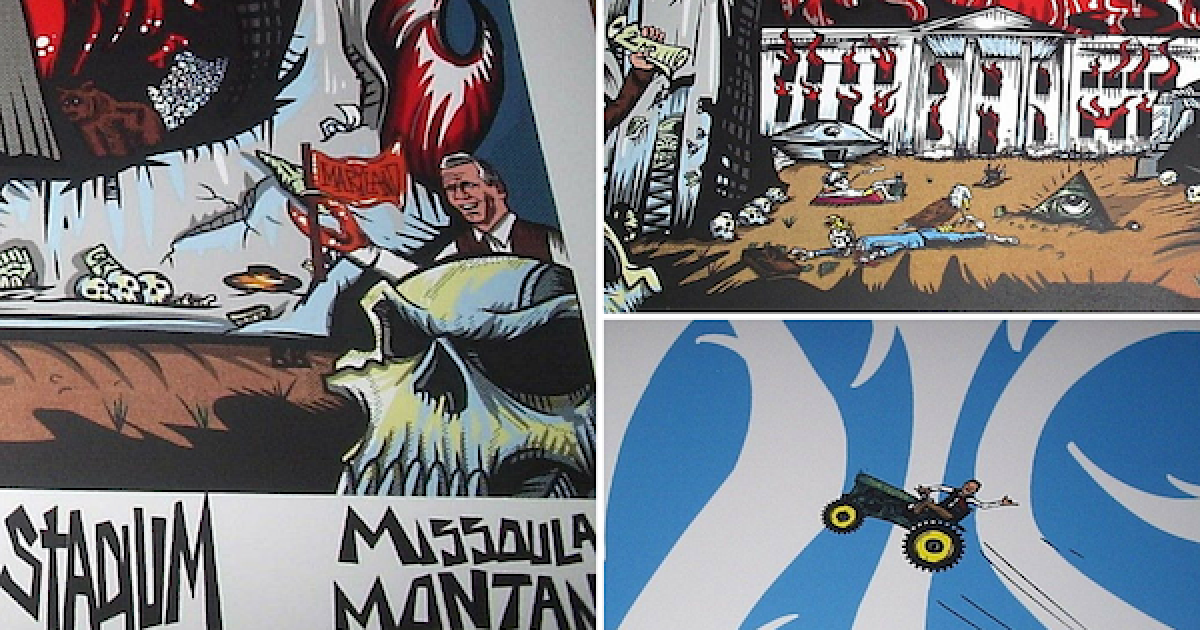 The poster was created to advertise a Pearl Jam concert pushing the Democrat’s re-election.

A spokesman for Matt Rosendale decried the poster in a statement to Breitbart News, saying, “Once again, Jon Tester has shown he will stand with the far-left over Montanans. This poster from Pearl Jam is disgusting and reprehensible. It depicts a dead President Trump and a burning White House. It’s time for Jon Tester to denounce this act of violence and blatant display of extremism.”

The poster, which was a collaboration between Pearl Jam bassist Jeff Ament and Bobby Draws Skullz, depicts an apocalyptic Washington, D.C., with the Washington Monument and Lincoln Memorial decayed and on fire. In the center of the poster is the skeleton of President Trump, with his hair intact, reaching for a briefcase emblazoned with the communist hammer and sickle, while an eagle feeds on his carcass.

Over the White House, Sen. Tester is cheerfully flying over President Trump’s dead body on a tractor with clouds that spell out, “vote.”

Montana Senate Republican candidate Matt Rosendale is depicted with a lobster claw and waving a flag that says, “Maryland.”

Ament is a “proud” supporter of Sen. Tester; the two have been friends for years, and Pearl Jam frequently comes to Montana to hold get-out-the-vote campaigns for Sen. Tester’s re-election campaigns.

Radio station KGVO has some close-ups of the poster. The section below is the offensive part, the one with President Trump (the arrow was added to make it easier for the reader to find.

“Below the flames of the White House, sprawled on the ground is the skeleton of President Donald Trump, with his signature hair still intact, reaching for a briefcase emblazoned with a hammer and sickle while an eagle feeds on his carcass” 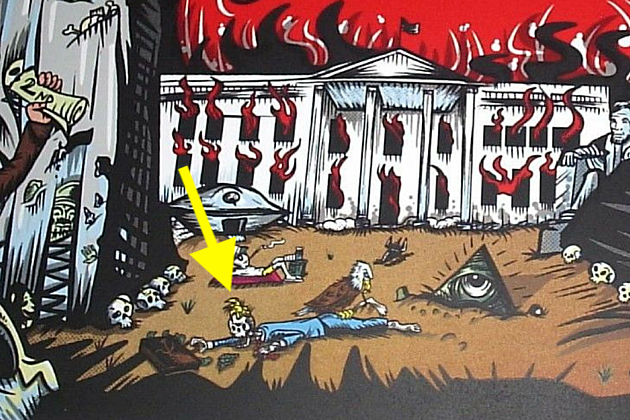 One has to wonder how the Democrats can continue to claim that everyone else is “the danger” to the country when just about all the violent rhetoric comes from them.

But liberals do it on a daily basis, then point their fingers at conservatives.

Much of this Post was first seen at Eagle Rising