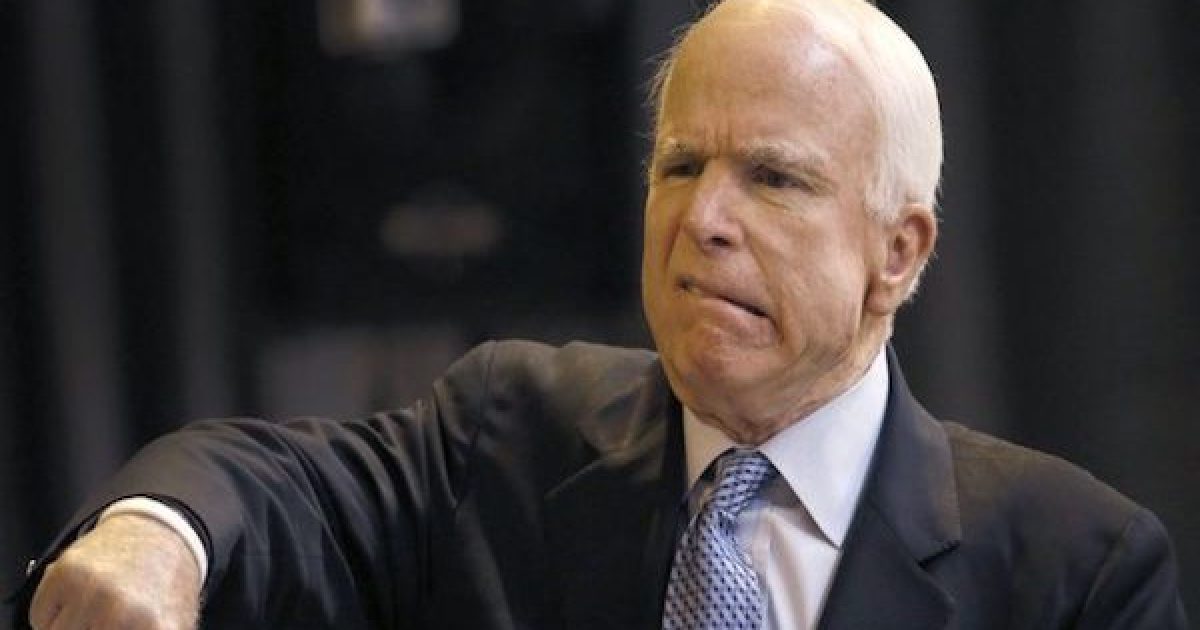 For the week since he passed away America was lectured ad nauseam about John McCain’s desire for political civility. Many people including myself kept wondering just who the hell are they talking about?  McCain only pushed civility in politics convenient and made him look good, much of the time he wasn’t politically civil, but a political a-hole.

We weaken our greatness when we confuse our patriotism with tribal rivalries that have sown resentment and hatred and violence in all the corners of the globe. We weaken it when we hide behind walls, rather than tear them down, when we doubt the power of our ideals, rather than trust them to be the great force for change they have always been.

And went on to promote the false myth of his civility:

We are three-hundred-and-twenty-five million opinionated, vociferous individuals. We argue and compete and sometimes even vilify each other in our raucous public debates. But we have always had so much more in common with each other than in disagreement. If only we remember that and give each other the benefit of the presumption that we all love our country we will get through these challenging times. We will come through them stronger than before. We always do.

Trump supported McCain in 2008, and McCain supported Trump until the Access Hollywood tape was released.  After that Mr.Civility was off to the races.

Perhaps his most significant anti-Trump move was that the intelligence community first learned of fake Steele Dossier from  Senator John McCain who turned it over to the FBI:

One would think that the Republican Senator from Arizona and former GOP presidential candidate would extend the courtesy to Trump to let him know about the documents that supposedly were about to be used by the Russians to blackmail the next president. But not McCain.

After 2017’s Inauguration Day McCain trashed Trump for his Vietnam War deferments, and an “unpatriotic as an attachment to any other tired dogma of the past that Americans consigned to the ash heap of history,” and of course his last minute vote change, blocking repeal and replacing Obamacare.

His last uncivil jab toward Trump occurred two and a half months before his death when it was made clear to the President that he didn’t want him at his funeral. But didn’t he say, “If only we remember that and give each other the benefit of the presumption that we all love our country we will get through these challenging times?”  Perhaps he left out the part about “except when one is dying.”

It was the perfect uncivil move, he gave Trump two choices, whichever one he picked the media would rip him. President Trump could go to the funeral anyway and upset the family, or honor their wishes and get killed by the press for not going.  He chose to accept the wishes of McCain and his family.  But make no mistake about it John McCain planned out every aspect of his funeral and knew precisely what he was doing.

And while we are talking about McCain’s civility what about Sarah Palin, who also wasn’t invited to the funeral.

Whether one likes Ms. Palin or not, joining John McCain put a target on her back, invited lawsuits and ridicule from almost every liberal alive and in the end ruined her political career. She campaigned hard and afterward had only complimentary things to say about her former running mate. But even before he died McCain stabbed her in the back. He lamented that he shouldn’t have picked her as his V.P. In his HBO Special called “The Restless Wave,” (which would have been more appropriately titled “Still an A-hole”)

While he continues to defend Ms. Palin’s performance, Mr. McCain uses the documentary and the book to unburden himself about not selecting Mr. Lieberman, a Democrat-turned-independent, as his running mate.

He recalls that his advisers warned him that picking a vice-presidential candidate who caucused with Democrats and supported abortion rights would divide Republicans and doom his chances.

“It was sound advice that I could reason for myself,” he writes. “But my gut told me to ignore it and I wish I had.”

Even more striking is how Mr. McCain expresses his sorrow in the documentary. He calls the decision not to pick Mr. Lieberman “another mistake that I made”

Nice going John, you screwed up Palin’s career, but on your death bed, you bemoan the fact you didn’t pick someone else. Then after you passed away, you needed to smack her once more.

It almost made one forget Biden’s prose during the 2012 campaign against Mitt Romney:

“They’ve said it, every Republican voted for it. Look at what they value and look at their budget and what they’re proposing. Romney wants to let the– He said in the first hundred days he’s going to let the big banks once again write their own rules. Unchain Wall Street. They’re going to put y’all back in chains. He said he’s going to do nothing about stopping the practice of outsourcing.”

Barack Obama’s speech was also chock full of hypocrisy, The man who during his presidency displayed his distaste for police, tea party and other conservatives, and those of the Jewish faith, praised McCain for being inclusive even though Obama himself was never inclusive.

To be honest, I was saddened by John McCain’s death as he was a legitimate military hero and his family was and still are in my prayers.  But the week-long lectures about McCain’s political civility made me want to hurl. In too many cases it was hypocrites lecturing the rest of America.  And more sickening is that John McCain was not a proponent of political civility, he was a political a-hole.