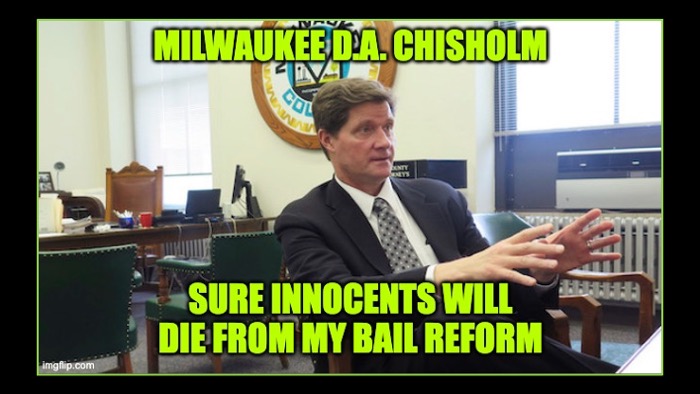 According to Milwaukee County District Attorney John Chisholm, just because some innocent people will die because a violent felon is released, “It does not invalidate the overall approach.”

Chisholm is the District Attorney for Milwaukee County. It was his office that allowed the career criminal, out on a pitiful $1,000 bail after hitting the mother of his child with his SUV earlier this month, and got into the same vehicle and mowed down dozens of innocent people at a Christmas parade on Sunday.

When he was first elected in 2007, Chisholm admitted that the progressive policies he champions were “guaranteed” to cause unintentional deaths. Still, he said that wasn’t enough of a reason to abandon them.

Riddle me this, Mr. D.A.: If innocent lives lost isn’t enough to “invalidate the approach,” — then what does invalidate it?

The district attorney facing criticism after the alleged Waukesha Christmas parade crash killer was freed on bond two days before the carnage previously admitted his progressive reforms “guaranteed” killers could be put back on the street.

Milwaukee County District Attorney John Chisholm, who was elected to the position in 2007, has spent his career supporting cash-bail system reform because he argues it criminalizes poverty.

In an interview with the Milwaukee Journal Sentinel the year he was elected, Chisholm said: “Is there going to be an individual I divert, or I put into treatment program, who’s going to go out and kill somebody?”

“You bet. Guaranteed. It’s guaranteed to happen. It does not invalidate the overall approach.”

It’s that whole “If you want an omelet, you’ve got to break a few eggs” approach to public safety.

You could also say that it’s an example of “everything woke turns to sh*t.”

Some of those “guaranteed” deaths came after Darrell Edward Brooks Jr, 39, intentionally drove his SUV through a Christmas parade killing 5 and injuring over 40.

“A background check from Wisconsin’s Department of Justice came back with over 50 pages of charges against Brooks stretching back decades,” reported Fox News on Monday.

You can read the entire 50 pages of his criminal history here.

The current open charges against Brooks from November 5, 2021 include:

In July 2020, Brooks faced three felony charges — two counts of second-degree recklessly endangering safety, use of a dangerous weapon, and one count of possession of a firearm by a felon, when he got into a fight in a backyard, took out a gun and fired a shot at two people who were about to drive away.

Here’s just a handful of what Brooks has been charged with before 2020:

He is an admitted child sex trafficker. pic.twitter.com/h1O7Ef8Xr6

While Chisholm and other “woke” D.A.’s insist that the bail reform is only for people who have been charged with “non-violent” crimes, that’s clearly not what is happening.

Brooks was out despite his violent criminal past.

The D.A.’s office is now backpedaling and saying that letting Brooks out on $1,000 was a “mistake.” and they’re investigating it. The thing is, we’ve seen this same thing repeated in other progressive jurisdictions that put a higher priority on criminals than on victims.

Here’s just one example of many:

This isn’t by accident. It’s by design.

The bleeding-heart wokescolds love this stuff.

So does their big-money donor, George Soros.

Milwaukee’s District Attorney John Chisholm, one of a number of DAs around the country whose campaigns Mr. Soros has helped bankroll, has worked for the last 15 years to change the city’s approach to incarceration. In 2018, he tweeted how Milwaukee was making a commitment not to keep individuals held on cash bail in jail. When the pandemic hit, Milwaukee’s “woke” Community Justice Council recommended criminals needed to be let out of jail immediately. The city obliged, reducing its jail population by about 40%.

Mr. Chisholm has also used his Twitter feed to cheer-on other Soros-endorsed district attorneys around the country, including San Francisco’s Chesa Boudin. Mr. Boudin will face a recall election next year amid a popular backlash over rising crime rates within the city and a lack of prosecutions.

“It’s my perception that Chesa lacks a desire to actually and effectively prosecute crime, in any fashion,” Brooke Jenkins, a homicide prosecutor, told the New York Times in June. “While he ran on a platform of being progressive and reform-focused, his methodology to achieving that is simply to release individuals early or to offer very lenient plea deals.”

These revolving door policies are popular with lefties in power but not with the people who have to live with the results.

And it’s now coming straight from the Executive Branch of government.

Remember when Kamala Harris tweeted out a link to a bail fund to get rioters out of jail?

If you’re able to, chip in now to the @MNFreedomFund to help post bail for those protesting on the ground in Minnesota. https://t.co/t8LXowKIbw

That went so well that they ran out of rioters and started bailing out violent criminals:

Soros seems to love this sort of thing since that’s where he’s putting his money.

The left often accuses the right of making Soros into some kind of mustache-twirling villain, but that’s not true.

He does that all by himself.

In 1992, he broke the British pound to pocket over a billion dollars and seemed to have no qualms about it.

He’s also created havoc in Europe with his NGOs meddling in policy, and he’s doing the same in the United States.

For years, Soros has been pouring millions into District Attorney races across the United States to push the progressive left’s view of de-fanging the carceral system.

See, the problem with that is… you get criminals on the streets who then commit more crimes.

Since at least 2015, Mr. Soros has plowed millions of dollars each election cycle to support progressive district attorneys across the country. All of his candidates support reducing the prison population and directing criminals to diversion/rehabilitation programs outside of the criminal justice system.

Mr. Soros’s political donations have largely propelled his candidates to victory – as there’s no major donor on the Republican side to counter his massive local cash infusions.

This is precisely the problem — conservatives don’t have donors willing to invest truckloads of cash into D.A. races to fight against this.

That clearly needs to change.

As right-wingers, we also need to pay more attention to races closer to home and perhaps less flashy but more relevant to our everyday lives. We also need to talk to our family, friends, and neighbors, so they don’t fall for this dangerous left-wing hug-a-thug claptrap.