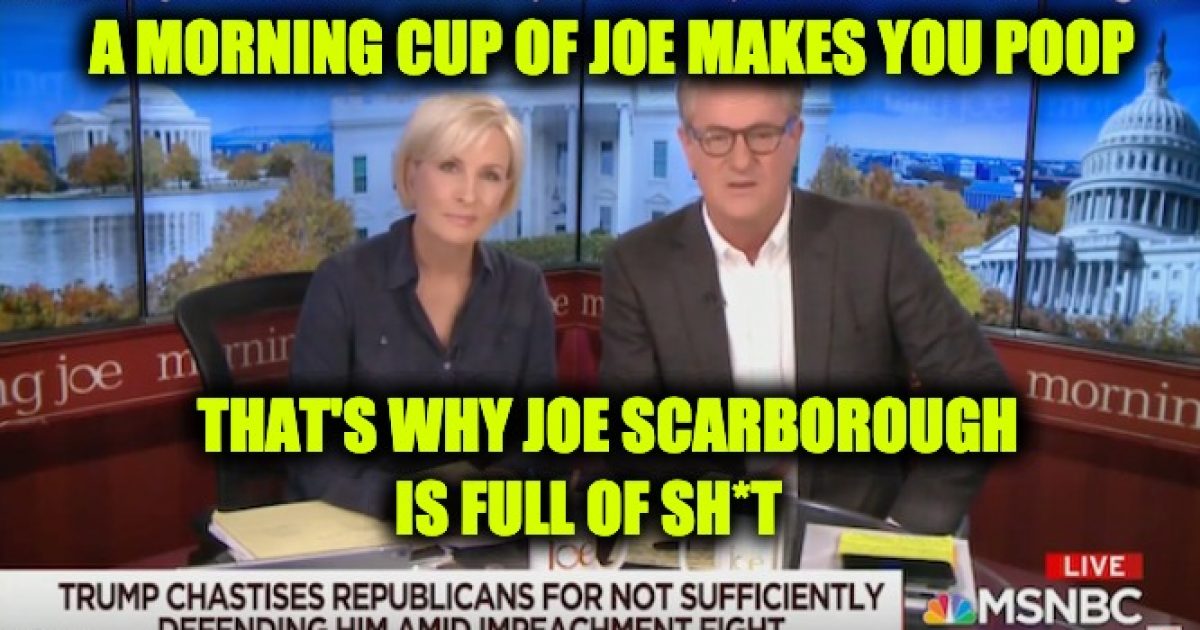 Gee, remember when he was a conservative Republican?  Joe Scarborough has really changed since he started sleeping with his very liberal married co-host, who he eventually married.  Back then, I would watch his show every morning. That was before Morning Joe became totally unwatchable and Scarborough joined the rest of his network in feeding viewers lies and ad hominin attacks against President Trump and everything Republican. Joe Scarborough’s latest lie

According to Joe Scarborough’s latest lie, President Trump would be impeached and Vice President Mike Pence would be elevated to the Oval Office within hours if the Senate were able to conduct their vote in secret.

Scarborough went on to argue that GOP senators prefer to “talk about policy” and not the president’s attempts to “loot the federal treasury to make hundreds of thousands of dollars” at his resorts. Joe, Doral was going to host the G7 for free as for the other resorts I would love to hear about it…where’s your proof?

Mike Barnicle added that he didn’t think any member of the Senate “would want their children or grandchildren to espouse the values that Donald Trump maintains each and every day of his life.” Joe agreed–now that’s rich.

What does Joe Scarborough know about values?  He should worry about the values he espouses to his children and Mika’s children and all their future grandchildren. Joe and Mika were both married with children when you guys decided to throw out your marriage vows and started sleeping with each other.   What kind of values are those?

It’s been medically proven that a morning cup of joe can make one poop. Perhaps that’s why the host of Morning Joe is so full of sh*t.

Per Newsbusters below is a video and the transcript of the rest of Morning Joe’s latest anti-Trump pile of poop.

And just like people used to be ashamed to admit they support Donald Trump. In fact, nobody would admit to us whenever we went around and gave talks. Nobody would admit that they were voting for Donald Trump. And at one point I just started saying you’re all lying, because you’re all voting for him, stop lying and they’d laugh and go, yeah, we are.

Well, now as Donald Trump exits stage left, I suspect that we will see the same thing that people will be reluctant to admit publicly that they can’t put up with him anymore. But I had the funniest conversation with a guy in Florida about a month ago, and he knew I was on TV but didn’t watch the show that much because he always got up early golfing. And he goes, weren’t you a Republican congressman? I go, yeah, yeah, I was and had no idea that I’m a conservative but I had problems with Donald Trump.

He goes, what are we going to do with that guy? I can’t stand the Democrats. I can’t stand Hillary. I can’t stand Elizabeth Warren. I can’t vote for any of those people but, man, he’s out of control. We need Mike Pence in the White House. And he went on and on and on.

And I felt, Willie, you’ll remember this, I felt like I was Eddie Murphy in that scene [from this SNL skit, begins at 3:38] where everybody thought he was white, and he went behind the scenes to see what happened. Went around, and suddenly he found out that bankers gave white people money and didn’t make them sign loans or anything like that. It was a peek behind the curtain.

So, it may say 92% there supporting Donald Trump and not wanting the impeachment inquiry. But, Mika, it’s actually the fear and loathing is rising. And that is something that Republican members of the Hill are picking up on.