Punished More Than A Holier-Than-Thou Married Morning Host Who Sleeps His Married Co-Star And Breaks Up Their Families? 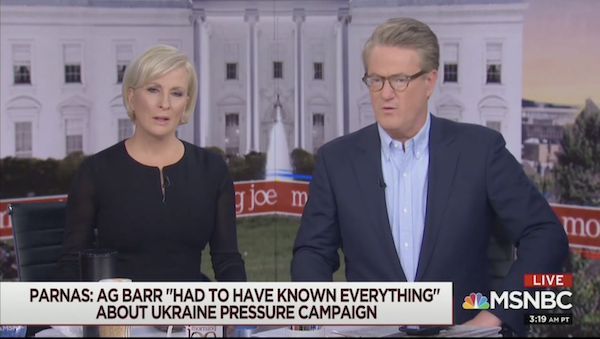 Even if he’s correct, which he’s not, I am sure that punishment would still be less than a married man who started sleeping with his married co-star, causing the break up of his family and hers. But I digress.

Newsbusters’ Mark Finkelstein posted a transcript of the segment:

History, it will be bleak. And their families, their children, their grandchildren—everyone who has their last name—will carry that around with them, if they decide to continue lying for a failed reality TV host who will show them no loyalty

Loyalty only goes one way with Donald Trump, and that’s what I find so remarkable here. That all of these people who are going to be called out! I promise you! I say this to you as your buddy. You’re going to be called out. You might as well do what Lev did, and come clean. Mike Pence! History’s going to record your deeds! Get in front of them! No need to talk to Barr: he’s corrupt to the core.

It doesn’t matter to Scarborough that there are many inconsistencies in Lev Parnas’ story.  Even Adam Schiff refused to say yesterday whether he thought Parnas was a “reliable witness.” When you haven’t convinced Schiff.,,

As for AG Barr, he is an honorable man, and I checked his bio, he never started sleeping with his co-star, so maybe you should talk about your own corruption.

Finkelstein quoted Numbers 14:18 which also happens to be in the Torah reading called Shelach. I (Jeff) read that Parsha for my Bar Mitzvah, It reads,

‘The Lord is slow to anger and abundantly kind, forgiving iniquity and transgression, Who cleanses [some] and does not cleanse [others], Who visits the iniquities of parents on children, even to the third and fourth generations.

Finkelstein used that quote to suggest “get some help.”  We agree.  He needs a LOT of help, at least so save this marriage from his next co-star.  Perhaps morning Joe would be most helped if someone but him in one of those cute white jackets with the extra-long sleeves that tie together his arms in the back. That might keep him from hurting himself and others.

Incidents like this, by the way, are why MSNBC is the official network of insane liberal hate.  These people are unhinged and dangerous.