Biden Brags About Having ‘Most Extensive Voter Fraud Organization’ in History 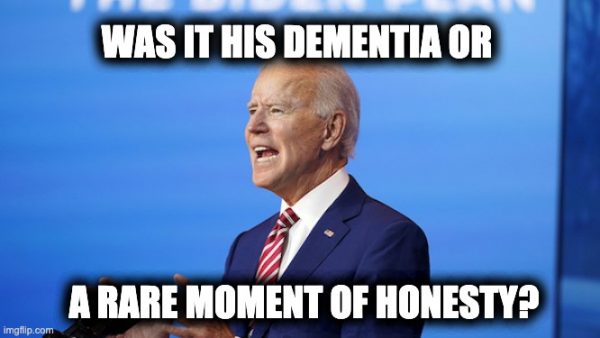 Was it a gaffe, additional evidence of dementia, or did lying Joe Biden finally decide to be truthful?  While speaking to former Obama staffers on Saturday, the Democrat White House nominee told the crowd that his organization has put together what he called “the most extensive and inclusive voter fraud organization in the history of American politics.”  Biden voter fraud

“Secondly, we’re in a situation where we have put together — and you’d [sic] guys, did it for our, the president Obama’s administration, before this — we have put together, I think, the most extensive and inclusive voter fraud organization in the history of American politics. What the president is trying to do is discourage people from voting by implying their vote won’t be counted, it can’t be counted, we’re gonna challenge it, and all these things. If enough people vote, it’s gonna overwhelm the system. You see what’s happening now. You guys know it as well as I do. You see the long, long lines in early voting. You see the millions of people who have already cast a ballot,” he said.

The bizarre comment quickly spread on social media, with White House Press Secretary Kayleigh McEnany — among others — posting it to Twitter:

?? BIDEN ADMITS TO VOTER FRAUD! ??@JoeBiden brags about having the “most extensive VOTER FRAUD organization” in history‼️

I normally don’t tweet on weekends but this is a really important message to get out. Please share… https://t.co/LadYg3UW7T

Maybe he admitted the truth because he said he didn’t like intelligent people:

Slow Joe Biden says he is "sick and tired of smart guys." pic.twitter.com/yf92vqVD62

His statement about corruption found some support—but not in a way that should make him happy:

Might be the first honest thing I’ve heard him say.

I agree. He was truthful.

Kyle Olson noted writing at Breitbart: “Biden did not correct himself after saying ‘voter fraud organization,’ nor did the hosts attempt to correct or clarify his statement.”

An interesting observation, indeed.  No doubt, if Trump had made a gaffe like this, it would be all over the lying liberal media.

On tweeter named Paledry agrees with what we’ve been saying on this site since Joe entered the campaign:

This is too mean, I can’t watch this. I wish his family loved him enough to stop him and help him.

Let’s make sure to send Dementia Joe back to his basement on November 3, so he can live out his days quietly without publicly exposing his mental decline.