Rep. Jim Jordan is NOT Anti-Semitic And Jerrold Nadler Is Not A Friend Of The Jews 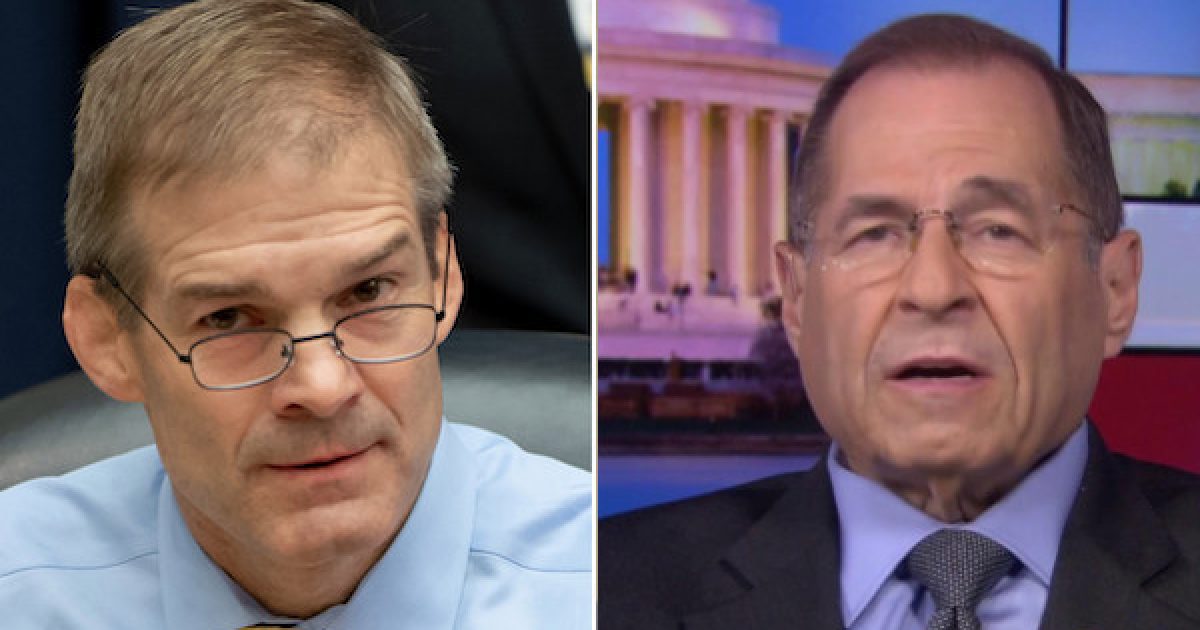 It’s incredible to see how fast liberals label a conservative as anti-Semitic, especially when one considers the extremely liberal Democratic Party has embraced Antisemitism over the past decade. Their latest attack, on Ohio Congressman Jim Jordan, is the second most ridiculous liberal charge of Jew-hatred ever (the most ridiculous was when Media Matters called yours truly, a Jew-basher).

At issue, is Jordan’s use of a $ as the first letter of billionaire Tom Steyer’s name in a tweet to Rep. Jerrold Nadler. Appearing on “This Week” with former Clinton operative George Stephanopoulos, the Chairman of the House Judiciary Committee Jerrold Nadler basically declared President Trump guilty of everything. He also announced that his committee was about to subpoena a long list of people, that seemingly including everyone in the United States who ever met, voted for, or walked on the same sidewalk as Donald Trump. Combined with anyone who ever watched an episode of the Apprentice, or ate at the Russian Tea Room in Manhattan

C’mon @RepJerryNadler—at least pretend to be serious about fact finding.

What a Kangaroo court. https://t.co/BpNIzdON1e

Nadler who is Jewish but has long abandoned Jewish causes in favor of moving up the Democratic Party ladder replied with a false charge:

To be clear, this tweet counts both as inane AND anti-Semitic. https://t.co/zUPL0hIcDf

Firstly, the reason for Jordan’s use of the $ in the words “Tom $teyer’s conclusion-impeaching our president”  was that Steyer has promised to spend lots of $$$$$ to impeach President Trump. As explained by the NY Times on January 9, 2019

But Mr. Steyer began informing aides early this week that he would not be a candidate after all, after concluding that he could have a greater political impact through his impeachment activism, several advisers to Mr. Steyer said. Mr. Steyer intends to spend at least $40 million on impeachment efforts in the coming year —

A second problem with Nadler’s charge is that Tom Steyer is not Jewish either by Jewish Law or practice. In Jewish law to be considered Jewish one has to either have a Jewish mother or have converted.  Steyer’s dad was a non-practicing Jew, and his mom was Episcopalian. There is no record of what faith he practiced when young, but as got older he began to observe his mother’s faith

As he approached 40, however, Steyer had what he has described as a revelation. He became more involved in the local Episcopalian church, the religion of his mother (his father was a non-practicing Jew), and sought celestial perspective from his myopic financial concerns.

In other words,  Jerrold Nadler accused Rep. Jim Jordan of being anti-Semitic by using a dollar sign as the first letter of the last name of an Episcopalian billionaire.

The fact that it was Rep. Jerrold Nadler accusing Rep. Jim Jordan of being anti-Semitic. Nadler is a Democrat who long abandoned Jewish causes because it would have prevented his rise in the Democratic Party. During the eight-year presidency of the most anti-Semitic President in my lifetime, Barack Obama not once did Nadler speak out against the hatred of the leader of his party.  If he genuinely cared about Antisemitism why was he silent?

Congressman Nadler betrayed this country, the 10th Congressional district of New York, and the Jewish community as he put his political future first and voted for the Iran deal, even after it was learned that Iran would get to self-inspect some of its most dangerous nuclear sites. But Obama put extra pressure on Nadler because his support will help him sell the deal to other Jewish Democrats, especially after former DCCC chair NY’s Steve Israel decided to do the right thing and oppose the deal.

After Rep Omar made her first set of anti-Semitic statements in early February, Nadler blamed conservatives:

One must also note and be concerned about the concerted Right-wing tactics aimed at advancing their agenda by distracting and dividing those committed to equality and social justice.  These tactics have painted some unfairly and we must guard against this as well, because to unfairly accuse someone of a particular hatred undermines the legitimacy of the condemnations when they are truly warranted.

Are we really to believe Jerrold Nadler,  a man who puts party before his country, his district and his fellow Jews when he labels  Jim Jordan, an anti-Semite for what he tweeted about an Episcopalian?

Rep, Jordan has always been an advocate for a strong US/Israel relationship. On the other hand, Nadler doesn’t fight for a Tight friendship between America and the Jewish State. Heck, he doesn’t even battle against Antisemitism unless it will advance his career.

Jerrold Nadler should look into his own actions and the Antisemitism of his own party before he falsely labels others as anti-Semitic.