Is The FBI’s General Counsel An Anti-Trump ‘Deep State’ Leaker? 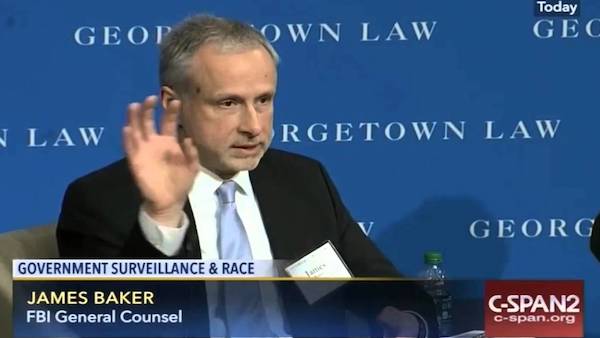 Sara Carter, a reporter for Circa has learned that the FBI’s highest ranking internal lawyer, an Obama holdover may be one of the people leaking classified information about President Trump.

FBI General Counsel James A. Baker is purportedly under a Department of Justice criminal investigation for allegedly leaking classified national security information to the media, according to multiple government officials close to the probe who spoke with Circa on the condition of anonymity.

FBI spokeswoman Carol Cratty said the bureau would not comment on Baker and would not confirm or deny any investigation.This comes as Department of Justice Attorney General Jeff Sessions said he would soon be making an announcement regarding the progress of leak investigations. A DOJ official declined to comment on Circa’s inquiry into Baker but did say, the planned announcement by Sessions is part of the overall “stepped up efforts on leak investigations.”

Three sources, with knowledge of the investigation, told Circa that Baker is the top suspect in an ongoing leak investigation, but Circa has not been able to confirm the details of what national security information or material was allegedly leaked.

Apparently, the FBI has been many investigations within the bureau to determine who the leaker(s) are.

And who is Mr. Baker’s good buddy?

Baker is a close confidant of former FBI Director James Comey, and recent media reports suggested he was reportedly advising the then-FBI director on legal matters following private meetings the former director had in February with President Trump in the Oval Office.

Not that Baker always agrees with his “close confidant.” according to a mid-June Washington Post report:

Before he met with Trump, Comey gathered his leadership team at the FBI to discuss whether he should be prepared to assure the president-elect that the FBI was not investigating him personally.

Comey testified that not everyone on his team agreed he should. Comey did not name the dissenter, but The Post has learned it was FBI general counsel James A. Baker. Comey testified that the member of his leadership team said that although it was true at the moment that Trump was not under investigation, it was possible that could change.

“His concern was, because we’re looking at the potential — again, that’s the subject of the investigation — coordination between the campaign and Russia, because it was President Trump — President-elect Trump’s campaign, this person’s view was, inevitably, his behavior, his conduct will fall within the scope of that work,” Comey said.

“And so he was reluctant to make the statement that I made,” Comey said.

Baker’s views did not change, even as Comey told Trump a second and third time that he was not being investigated.

“His view was still that it . . . could be misleading, because the nature of the investigation was such that it might well touch — obviously, it would touch the campaign, and the person at the head of the campaign would be the candidate. And so that was his view throughout,” Comey said.

The only one? Was James Baker showing his disdain for the president back then?

Keep in mind, this is an ongoing investigation, it doesn’t mean Mr. Baker will be charged and if charged is guilty of anything, but what it does mean is that Attorney General Sessions is going all out to find the leaker.

Below is a video from Hannity’s Thursday night program, where Sara Carter discusses her scoop: