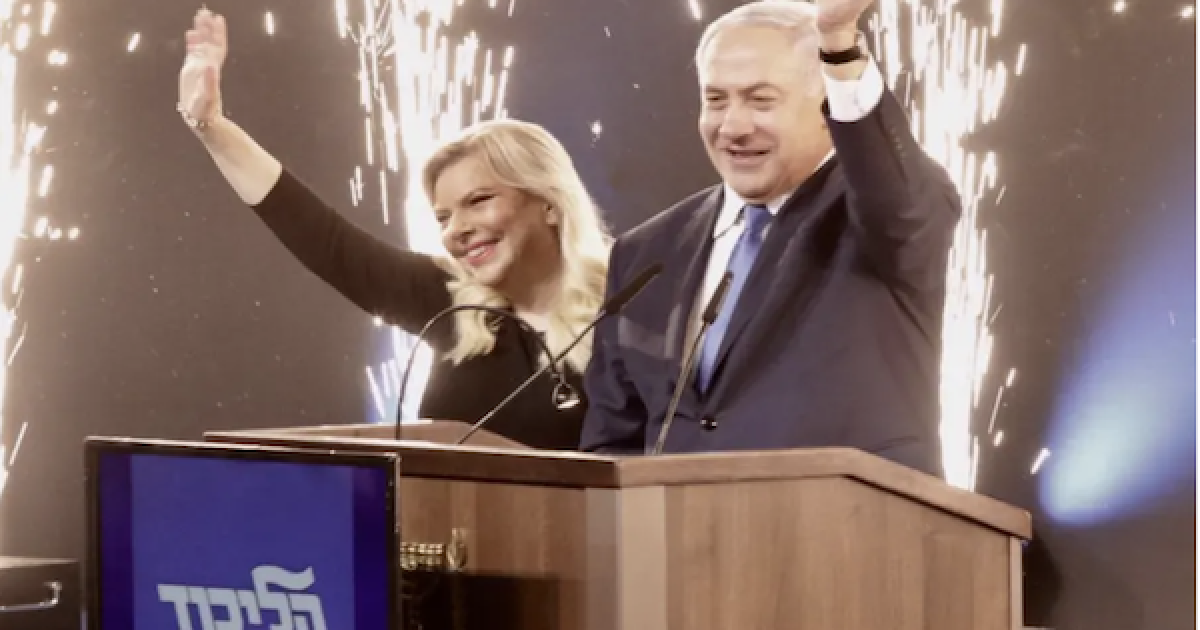 About 97% of the votes have been counted. Unless something major happens with the final counted ballots Bibi Netanyahu’s Likud Party will be at worst tied with Blue and White. These results are a shocker, the Blue and White were projected to win big, and if these results hold the Likud-led coalition will be able to grow its size from the 61 seats it presently has to 64 and some pundits are projecting  In other words, Netanyahu will be able to solidify his coalition.  And the very last votes to be counted will those from the IDF, generally younger voters. And in this election, the younger voters are going with Likud. 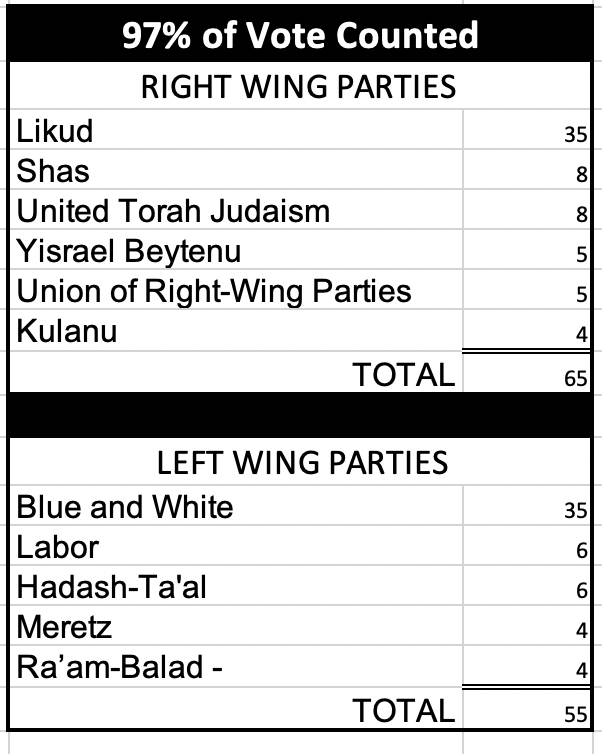 Another surprise is the Labor Party which began as a socialist party and is still far left. For most of Israel’s history was the dominant political party controlling the Knesset and the Prime Minister’s office with center-left coalitions. That changed with the failed Oslo process and the violence of the Second Intifada. Labor and the left have been in decline since 2001. With this election, Labor has joined the ranks of the minor parties. And Israel has solidified (for now) as a center-right country.

When Israelis went to the polls today, they voted for a party list. The list was a docket of candidates in a particular ranking of importance set by the party leadership (first on the list was the party leader/Prime Minister, candidate). The final pre-election, the leading parties will be either Benyamin Netanyahu’s Likud Party or The Blue and White party led by former IDF chief of staff Benny Gantz–that’s right Bibi vs. Benny.  While one of them will probably be the next Premier, they won’t be the ultimate political powers. It is the smaller parties that will put a coalition above the 61 seats needed to build a coalition government that may be holding all the cards.

Seats are awarded to each party that meets a minimum threshold of 3.25% of the total votes gets seats in Knesset (parliament). Seats are given out in the order they appear on the list. As in previous elections, many parties are running joint lists. There are a total of 40 party list running in the election.   Because that percentage is still small many of the smaller parties gain seats and power in the Knesset based in polls probably about ten of the 40 running, it also means that parties that do well in one election can disappear in the next.

In Israel’s short 70-year history, no party has ever gotten a majority of the 120 seats in the Knesset. Every government has been a coalition. Therefore under the Israeli system, the election is just the first part of the political process, depending on the results once the votes are counted the politics truly begin.

Even if Netanyahu’s party Likud ends up 4-5 seats behind, Likud has more allies in the religious parties giving him a better chance of forming a government. Therefore Bibi may still be the one asked by Israel’s President Rivlin to form a government (BTW asking a party leader to form a government is the only real power held by the Israeli President). The Blue and White will have to build a big lead to control the Prime Minister in the next government because Likud has a better chance of forming a coalition–Maybe.

There are a few parties that are hovering around that 3.25% threshold. If they make it to 3.25%, they get four seats in the Knesset, if not-they get nothing. Those small differences can change the coalition arithmetic and the right-left numbers projected by the exit polls above depending on the leanings of the party reaching the threshold.

On April 6th it was falsely reported that Bibi announced that he would annex Judea and Samaria if he’s reelected. As he related to I24 news on Monday,

“I did not say I would annex the West Bank, I said I would apply Israeli law to Jewish communities in Judea & Samaria,” Netanyahu affirmed, using a biblical term to refer to the territory of the West Bank. “I said time and time again, I will not remove a single Israeli forcibly, I am against ethnic cleansing,” he added.

Likud is a center-right, their platform emphasizes being fiscally conservative and economic growth, the Likud backs additional tax cuts, the reduction of business regulation, and the reform of some government-owned companies.

Likud has pledged to protect the Status Quo compromise on issues of religion-and-state and has backed demands by Haredi coalition partners to strengthen enforcement of Sabbath observance in the public sphere. That is why it is more likely that the religious parties will join a Likud led coalition.

According to the party’s platform, the Blue and White list backs territorial compromise with the Palestinian Authority and “separation from the Palestinians.” It also calls Israeli sovereignty over the whole of Jerusalem, as well as Israeli security control over the Jordan Valley along the border with Jordan.

The Blue and White party endorses taking away power from the religious institutions such as civil marriage – including same-sex marriages – and expanded public transportation on the Sabbath. If they were to form a coalition most probably, they would not be able to draw support from the religious parties, a big chunk that in aggregate has 21 seats in the present Knesset.

Once the election is over, the real politics start. Building a coalition.  For the Americans who are reading this, do you remember all the deals that were made in the Senate to pass Obamacare, like when Nebraska Senator Ben Nelson got all the extra benefits for his state to change his vote? Well, folks, you ain’t seen nutting yet!

In the next few weeks deals will be made for cabinet positions, policies, etc., all in the name of building a coalition of 61+ votes to lead Israel. That will be the fun part.

Fasten your seat belts because the next few weeks are going to be very interesting.

One possible fly in the ointment is that Netanyahu met with Putin last week. I understand that a delegation led by U.S. Reps Schiff and Nadler, along with Brian Stelter and Jim Acosta of CNN plans to fly to Tel Aviv to declare that Bibi colluded with the Russians (not really but I wouldn’t be surprised).