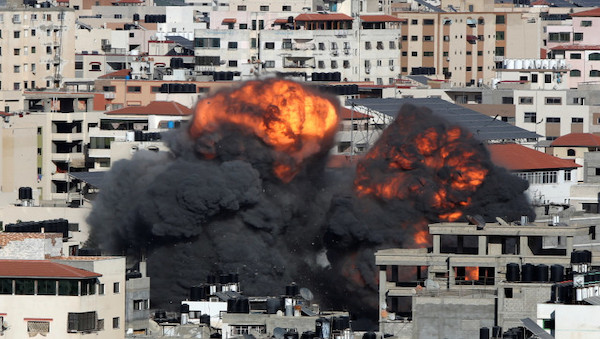 Whoever planned this IDF operation is brilliant. The IDF made Hamas think that a ground incursion was about to happen. Fearing the attack Hamas terrorists escaped into their tunnel system. At least they thought they were escaping. They didn’t realize they were being set up,  they weren’t escaping–the Israeli Airforce was waiting for them at the tunnels.  Israel fooled Hamas

At around 3pm EDT Thursday, the IDF began to assemble troops on its border with Hamas-controlled Gaza. It looked like the expected IDF incursion into Gaza to force Hamas to stop firing missiles would happen any second.  About two and a half hours later, the IDF released this message:

IDF air and ground troops are currently attacking in the Gaza Strip.

The mainstream media throughout the world pounced on the story.  Establishment media reported the attack with headlines such as. “Israeli troops have entered the Gaza Strip as conflict with Palestinians escalates, Israeli military says.”

Notice that the MSM said that the IDF ‘entered” Gaza, but the IDF only said attacked?

Save this tweet: No Israeli ground forces were sent into Gaza. But the @IDFSpokesperson statement echoed by the media triggered Hamas to move its forces into the main reinforced tunnels away from the border. The IDF then hit the tunnels. Classic military deception tactics. https://t.co/HFFLegTuVX

Hearing this news, Hamas terrorists fled into the ‘Metro’ tunnels, an underground city/tunnel system built by Hamas after the 2014 war. Hamas uses the Metro tunnels to hide their and move them from point to point within Gaza without being seen by the Israeli Air Force (IAF).  But what the Hamas terrorists didn’t understand was there was no ground offensive. As they ran through the tunnels and began to come out the other side, they were sitting ducks. 160 IAF planes had assembled for a massive bombing run over the Gaza Strip specifically targeting the Metro.

According to Arutz Sheva:

On Thursday night, the IDF brought in 160 aircraft and dropped 450 bombs containing over 80 tons of explosives, hitting 150 terror targets in 35 minutes. Hamas’ underground city was hit with enormous force, and the IDF collapsed the terror tunnel system, on the heads of the terrorists hiding in the tunnels.

During the attack, many kilometres of terror tunnels were destroyed. As of now, neither Israel nor Hamas is clear on the exact scope of the damage, but according to estimates, a large number of terrorists were buried in the sands beneath Gaza.

(…)Simultaneous to the air force attacks, infantry, artillery and armored forces deployed along the border fired hundreds of artillery shells and dozens of tank shells at targets in Gaza.

“In addition, we apparently succeeded in injuring a senior official in the [Islamic] Jihad anti-tank force,” he added.

Avoiding a ground incursion saves the lives of Israeli soldiers and avoids collateral Palestinian casualties. This doesn’t mean that there will be no Israeli ground force incursion into Gaza. As long as Hamas keeps up its rocket attacks, that is an unfortunate strong possibility.

Below is an IDF video of the attack on the Metro Tunnel System.