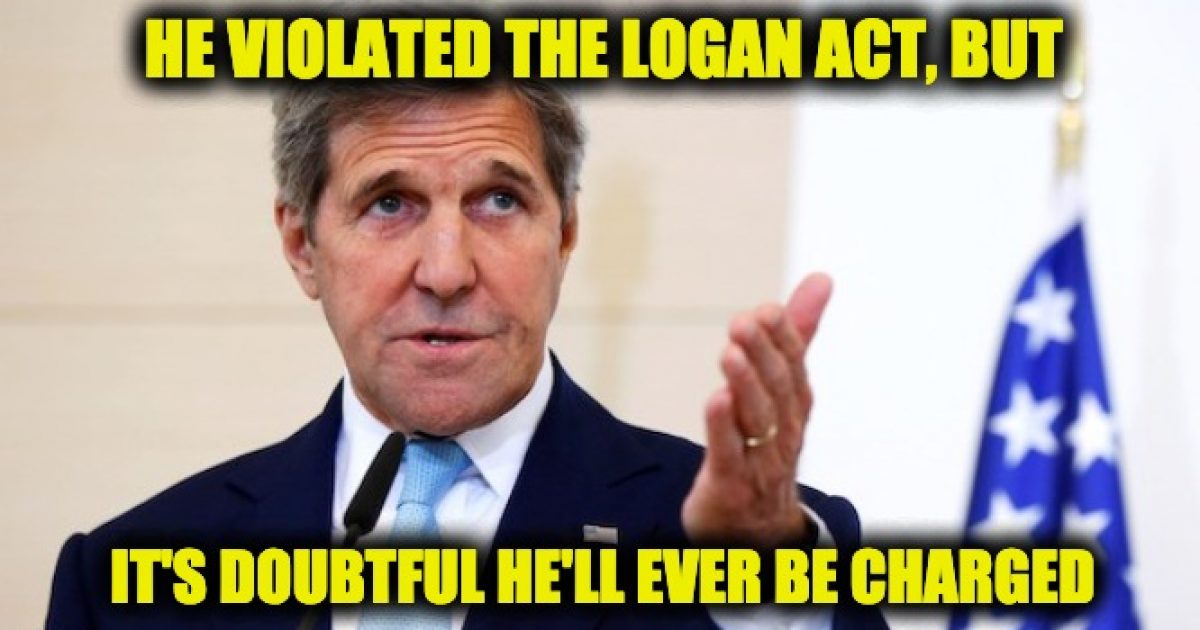 A week ago President Trump brought up the subject of former Secretary of State John Kerry violating the Logan Act. He said that despite the violations there would be no criminal investigation because, “But my people don’t want to do anything, only the Democrats do that kind of stuff. If it were the opposite way, they’d prosecute him under the Logan Act.” Now Senator Marco Rubio has picked up the ball and sent a letter to Attorney General Barr asking for an investigation of Kerry’s recent Logan Act violations with Iran (Kerry has violated the Logan Act many times, with many different countries during his career)

Kerry’s admitted to his latest violations. During interviews to promote his new book this past September Kerry told an interviewer that he has met with Iranian Foreign Minister Javad Zarif three or four times since leaving office and that their talks touched on the international nuclear agreement which Kerry negotiated and President Trump withdrew from because it was such a bad deal or America. This was the first time Kerry admitted this violation, but in May of this year, the Boston Globe reported that he had been secretly meeting with the Iranian foreign minister and European leaders, advising them on how to save the flawed JCPOA.

During a September 14th, 2018, press conference  Secretary of State Pompeo was asked whether he thought Kerry’s Iran meetings were a violation of the Logan Act. He refused to get into whether it was legal, but he certainly thought the meetings were very wrong.

I’ll leave the legal determinations to others. But what Secretary Kerry has done is unseemly and unprecedented. This is a former secretary of state engaged with the world’s largest state sponsor of terror, and according to him – right? You don’t have to take my word for it. He – these are his answers. He was talking to them. He was telling them to wait out this administration.

You can’t find precedent for this in U.S. history, and the secretary ought not – Secretary Kerry ought not to engage in that kind of behavior. It’s inconsistent with what foreign policy of the United States is, as directed by this President, and it is beyond inappropriate for him to be engaged in this. I remember, I saw him. I saw him in Munich at the Security Conference. He was there with – if I have my facts right, because I think I saw them all with my own eyes – Secretary Moniz and Wendy Sherman, the troika. And I am confident that they met with their troika counterparts, although one can perhaps ask Secretary Kerry if my recollection with respect to that is accurate.

I wasn’t in the meeting, but I am reasonably confident that he was not there in support of U.S. policy with respect to the Islamic Republic of Iran, who this week fired Katyusha rockets toward the United States embassy in Baghdad and took action against our consulate in Basra.

So Marco sent a letter to the new AG this week:

I write to make you aware of a September 18, 2018 letter I sent to your predecessor regarding potential violations of the Logan Act (18 U.S.C. § 953) and the Foreign Agents Registration Act (22 U.S.C. § 611 et seq.) by former Secretary of State John F. Kerry.  As you know, former Secretary Kerry’s actions since leaving office have come under scrutiny as they related to the Iran nuclear deal, known formally as the Joint Comprehensive Plan of Action (JCPOA).

The full letter to your predecessor is attached.

The American people deserve to know that U.S. laws are enforced regardless of any individual’s past position. The Department of Justice should therefore make a determination on whether or not former Secretary of State John F. Kerry’s recent actions related to the Joint Comprehensive Plan of Action with Iran potentially violate the Logan Act or the Foreign Agents Registration Act.

Thank you for your prompt attention to this matter.

Rubio also posted his letter to Barr on Twitter:

Today I urged the DOJ to investigate whether former Secretary of State John F. Kerry’s actions since leaving office related to the #Iran nuclear deal violate the Logan Act or FARA –> https://t.co/yxq4O2bmke pic.twitter.com/V52wxcd5mL

While he is rightfully going after Kerry, perhaps Rubio can ask Barr to investigate a January 2018 report in the Israeli Newspaper Ma’ariv. Ma’ariv reported that John Kerry gave a message to Palestinian Authority Pres. Abbas, “that he should stay strong in his spirit and play for time, that he should not break and will not yield to President Trump’s demands,” because Trump will be out of office within the year.”

In the 220 years since the Logan Act was signed into law that only two people have ever been indicted on charges of violating the Act. Francis Flournoy in 1803 and Jonas P. Levy in 1852. Neither one was convicted of violating the Logan Act.  So even if Barr investigates, it is doubtful that John Kerry will be charged for his Iranian negotiations or any of his other violations of the Logan Act.