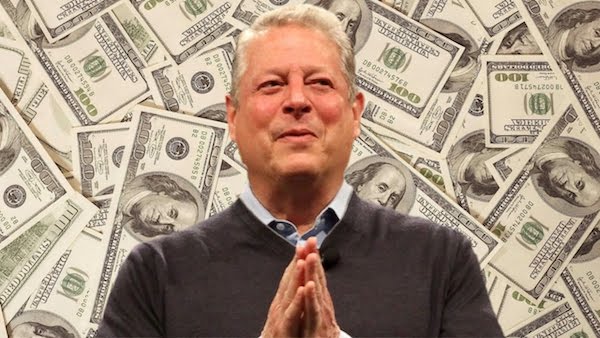 At the same time, he has released his follow-up to the comically incorrect “An Inconvenient Truth” shocking stats were released about Al Gore’s uses of carbon-generated electricity. According to a new report by the National Center for Public Policy Research, in his Nashville house, Al Gore uses 34x the energy of the average American home. But it’s really nothing new. The former VP doesn’t really believe the climate change hypothesis, for him, it’s a way to make money.

The new data about his Nashville house includes:

For appearance’s sake, the former VP with an unreleased chakra paid an estimated $60,000 to install 33 solar panels. Those solar panels produce an average of 1,092 kWh per month, only 5.7% of Gore’s typical monthly energy consumption. So Gore is using tons of fossil fuels–by himself!

In 2010, Gore announced that he and wife Tipper were divorcing after 40 years of marriage. According to media speculation, Tipper likely lives in the $8.9 million California home the couple purchased weeks before the separation.The Gores have four grown children who no longer live at home. That leaves the former vice president as presumably the only occupant of the home, making his energy consumption even more staggering.

Gore also owns at least two other homes, a pied-à-terre in San Francisco’s St. Regis Residence Club and a farm house in Carthage, Tennessee [in other words his carbon footprint is even larger].

Gore has said the criticism was unfair because the 10,000-square-foot mansion was undergoing extensive remodeling. He said this week that “global warming denier” groups were trying to discredit him because they don’t like the attention he has given to climate change.

That was ten years ago–the remodeling is long over and his energy usage higher. Gore continued:

“You’re going to have people try to attack the messenger in order to get at the message. They have not been able to succeed,” Gore told CNN from Norway, where he picked up the Nobel Peace Prize for his environmental work.

“The only way to solve this crisis is for individuals to make changes in their own lives,” he said.

The first Earth Hour was on March 28th, 2009. Between 8:30 and 9:30 pm all people worried about global warming were supposed to turn off all products that use electricity. But what about Al Gore? Drew Johnson who also wrote the study above decided to take a ride to Gore’s home to see if the guru of global warming joined in on the national hour of darkness. As he described on his Facebook page (and cross-posted on The Lid)

I pulled up to Al’s house, located in the posh Belle Meade section of Nashville, at 8:48 pm – right in the middle of Earth Hour. I found that the main spotlights that usually illuminate his 9,000 square foot mansion were dark, but several of the lights inside the house were on.

The kicker, though, were the dozen or so floodlights grandly highlighting several trees and illuminating the driveway entrance of Gore’s mansion.

You see the real reason Al Gore wants you to read his books and go see his movies and even see his lectures isn’t because he is trying to save the Earth from global warming and climate change, but because he’s invested in products that will be successful as long as people are convinced by the climate change scare tactics. As reported by the Daily Caller in February 2016;

The former vice president’s global warming activism has helped increase his net worth from $700,000 in 2000 to an estimated net worth of $172.5 million by 2015. Gore and the former chief of Goldman Sachs Asset Management made nearly $218 million in profits between 2008 and 2011 from a carbon trading company they co-founded. By 2008, Gore was able to put a whopping $35 million into hedge funds and other investments.

Gore also has a remarkable record of investing in companies right before they get huge grants from the government.

Al Gore doesn’t really believe his own hype. If he cared he would be setting an example in his own life and not waste all that energy on things like heating his pool. His real goal is to make everyone else concerned by climate change — so he can add change to his own pockets. Therefore in a way, all his climate change lemmings are paying for Al Gore’s extra large carbon footprint.