The Gang That Couldn’t Impeach Straight 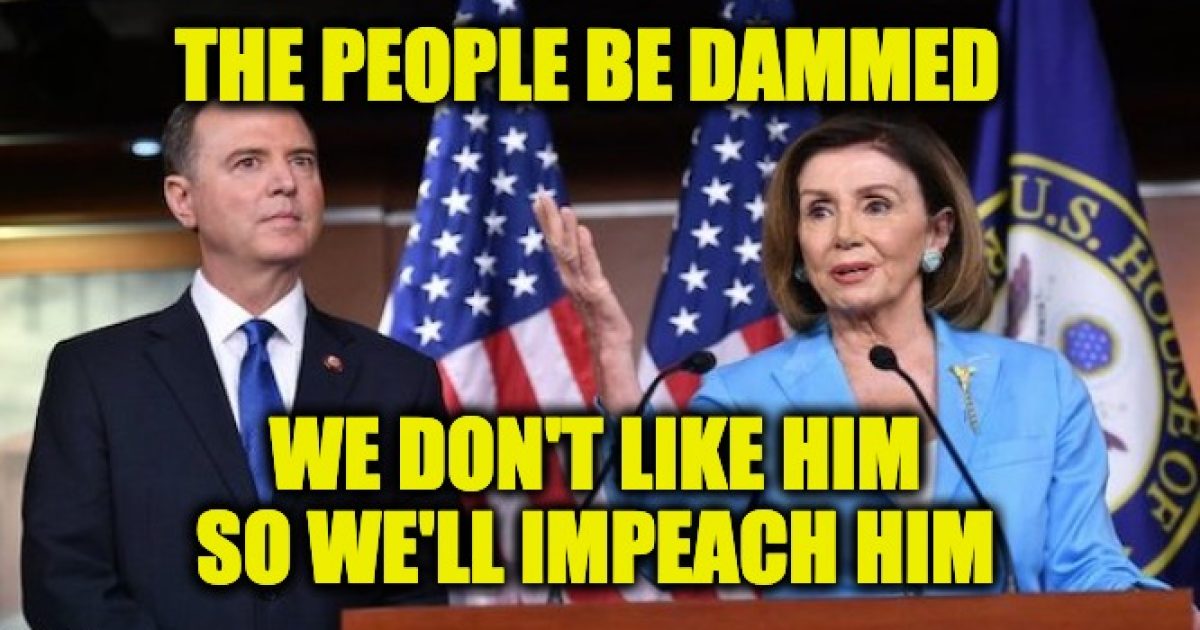 The media and House Democrats are trying to railroad the American people with misleading headlines into buying off on an impeachment that would shame a kangaroo court. impeachment gang

I think most people understand that, without having to go through the bill of particulars line by line.  But just for fun, let’s briefly consider each point we’re being encouraged to ignore or believe wrongly about.

First – and this is the one that should be decisive and fatal in its own right – the House Democrats are holding secret hearings in which the people never see what questions are being asked, who’s asking them, or what we can independently verify the witnesses have said.

Second, the Democrats are nevertheless “leaking” selective information to the media from each hearing, while keeping almost the entire House of Representatives out of the closed-door sessions and muzzling committee Republicans.  The Republicans, unlike the Democrats, are not disclosing details from the testimony, because doing so violates the House rules for closed-door testimony.  The Democrats are breaking the rules every day.

This inherently demonstrates bad faith on the part of the Democrats’ leaders.  We have no reason to believe anything the Democrats give the media to publish.

Therefore, any ridicule from anyone about the propensity to believe or not believe allegations about Trump is moot. That cannot be overemphasized.  The “you’re a stupid Trumpista” card is played out.  In fact, it is somewhere between vile, disgusting, and pathetic to keep trying to play it.  It only makes the card player a fool.

Hold hearings in the open, by the rules, or shut up.

Let’s be perfectly clear here.  The first two points mean that Tuesday’s supposed bombshells from the testimony of William Taylor are meaningless.  No one has any obligation to even believe that they’ve been reported accurately, much less to take their import up for discussion.

All those people have to do to change that is broadcast the hearings live and give Republicans time to ask questions, with witness answers (or lack thereof) fully exposed, without being silenced or interrupted.

And it must be done now; no secretly crafted basis for selective broadcasting later can be valid.  Either we know everything, or we can believe nothing.

They refuse to do it.

Third, the supposed basis for the “impeachment” inquiry is the 25 July phone call between President Trump and President Zelensky of Ukraine.  The media-Democratic narrative is that the phone call alarmed a “whistleblower” because it was about a quid pro quo in which U.S. aid to Ukraine was made conditional on Ukraine opening an investigation of Joe and Hunter Biden’s interactions with, respectively, Ukrainian government entities and the Ukrainian oil company Burisma.

Nothing about this narrative is actually true, based on the information publicly available.

The so-called “whistleblower” had no firsthand knowledge of the phone call, and moreover made the report about it through the intelligence community’s inspector general, although the substance of the report is not a matter within the purview of national intelligence.  That’s not whistleblowing.

More importantly, we already have the transcript of the phone call, and we, therefore, know enough to judge that the phone call did not set up the quid pro quo incessantly touted by Democrats and the media.  President Trump’s own reference to Ukrainian investigations was to ongoing probes of possible Ukrainian involvement in meddling with the U.S. 2016 election.  He also expressed general concern about corruption in Ukraine, praising Zelensky’s commitment to fighting it in the course of his brief reference.

President Zelensky brought up the Bidens because Ukraine had already (months before) launched an investigation of Burisma, which included Hunter Biden’s role on its board.  Trump didn’t convey any sense of a quid pro quo about that.  He affirmed that it was important to continue the probe and not let it be stopped by pushback from third parties (including his own former ambassador).

It is a separate question whether it was a good or bad idea for Trump to ask Zelensky to give special cooperation to Rudy Giuliani, which Trump undoubtedly did.  Some people will judge in good faith that it was a bad idea: the wrong way to handle such things.  That opinion should be respected if not necessarily agreed with on absolute principle.

But it doesn’t mean the president has done anything that violates the law or reaches the impeachable level of high crimes and misdemeanors.  Presidents have used personal envoys for many, many things over the years; it is merely exploiting public ignorance to shriek that this instance was more nefarious than anything in our national history has ever been.  That’s asinine.  It’s also simply incorrect.  Using Giuliani to contact Ukraine violated no law or custom.

Fourth, the timing of publicly known events demonstrates that even the semblance of a quid pro quo could not be established.  For President Zelensky to perceive such a transaction, he would have had to know that a hold had been placed within the U.S. Department of Defense on military aid to Ukraine, at the time he and Trump were discussing the Ukrainian corruption probes.  He didn’t know that.

We also know that Trump had multiple valid reasons for putting that hold on the military aid.  The two big issues were (1), precisely, the concern about corruption in Ukraine, which was likely to affect the transfer and use of military equipment; and (2) the parallel processing of military sales to Ukraine, which raised multiple questions such as whether we were both selling and giving equipment of potentially the same kind to Ukraine, and how the terms of sale and total arms flow to Ukraine would affect topline U.S. and NATO priorities.

But fifth, there is a crucial and too little discussed point, and it’s this.  I am grateful to Andrew McCarthy for writing about it, as it’s hard to get an echo for it.  “Quid pro quo” is not a dirty-word expression in foreign relations.  It’s the coin of the realm.  Literally: it’s the basis of exchange; how nations conduct their affairs, with both friends and adversaries. Countries deal in quid pro quos all the time.  They’re a reality 365 days a year.

Almost all specially-negotiated situations (e.g., winning an indicted American’s release as a high-level favor) also involve quid pro quos.  Where anyone gets the idea that the U.S. swans about the planet exercising quid-pro-quo-less noblesse oblige as if we’re a global super-charity, I don’t know.  But that’s not a description of what we do, or of what anyone else does.

We’re a nation dealing with other nations.  Why do you think we don’t just heave aid indiscriminately at really awful, really needy regimes (like North Korea’s), but instead make aid contingent on commitments and performance?  Because the indiscriminate distribution of aid to foreign states is neither wise, prudent, nor expected.  And rightly so.  Foreign aid of any kind should always come with strings, starting with the ability to verify that humanitarian assistance is reaching the people it’s meant to help and not just propping up corrupt despots.

Push this “quid pro quo” narrative back to its most basic constituent parts, and it falls apart altogether.  Far from it being a high crime to pursue the matter, we should know what the corruption patterns really are before we ship millions in military equipment to a foreign country.  Who was involved in the corruption patterns doesn’t affect that principle.  No new circumstance, such as one particular individual’s candidacy for political office in the United States, should make it off-limits to require certification that our aid won’t be misused.

But in any case, there is no verifiable evidence whatsoever that the “quid pro quo for Biden” narrative, in particular as it relates to Joe Biden being a political candidate, is valid.  Nothing reported out of the secret hearings run by Adam Schiff is evidence.  We have no reason to believe any of it.  There is literally nothing to believe out of all this, except the information that can be independently verified.

At the moment, that set of data points is extremely small.  We have the transcript of a phone call.  We may have the reporting on activities in the administration, and Congress made before the bogus “impeachment” process was launched.  Some of it, such as foreign military sales cases for Ukraine and internal deliberations about the military aid, can be documented from Defense Department files. Some of it, like media reports from the spring of 2019, can’t be further documented at the moment, although we may give it more credence than anything “disclosed” since the eccentrically mounted “whistleblower” case was blown up by the media in September.

Since the first reporting of the “whistleblower” case, we can neither trust nor verify what is coming to us through the media or from Congress.  We could and should say the same if it were the Republicans holding secret hearings, and the Democrats objecting and claiming afterward that what we’re being told is inaccurate.

But it’s not.  It’s the other way around.  So just can the mockery and sarcasm about Trump.  What’s unconscionable here is suggesting that Americans should be prepared to lose their country – see a duly-elected president hounded out of office without due process – through machinations that start with dubious propositions and rely on innuendo, misleading rhetoric, and a cloak of darkness.