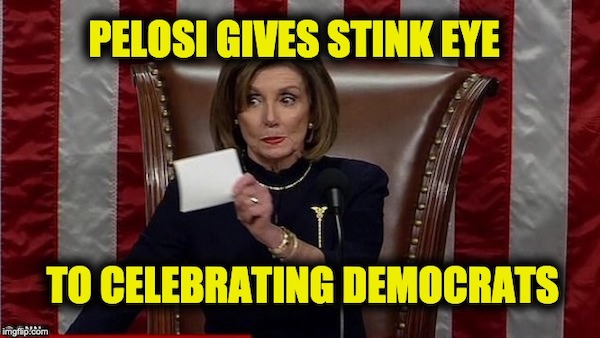 While there is some question whether or not Jeffrey Epstein committed suicide, there is no question about this. On Wednesday, the House Democratic Caucus killed themselves on live TV. They didn’t use ropes or guns, the Democrats killed themselves by inappropriately using the constitutional provision about impeachment. But they didn’t care, they were too busy stroking their fragile egos.Impeaching Trump

Impeachment was supposed to be the political equivalent of a death sentence, During the first two hundred and ten years of the American Republic, it was only used once. Andrew Johnson broke a law designed to stop him from replacing Edwin M. Stanton as Secretary of War.  While he broke that law, it was really a policy battle about the reconstruction of America after the Civil War. Johnson wanted to embrace Lincoln’s more lenient policies toward the states that seceded, the veto-proof Congress and Secretary Stanton wanted them punished. Johnson’s presidency was saved in the ensuing Senate trial by one vote. Eventually, that law that Johnson broke was struck down by the Supreme Court. But it was too late for Johnson.

There was no other serious use of impeachment till the Richard Nixon presidency. In this case, the president committed real crimes. Thefore three articles of impeachment were passed by the House Judiciary Committee. But before the full house could vote, Richard Nixon became the first president to resign from office.

Bill Clinton was impeached for a crime.  Democrats will tell you it was because he had an affair. But the articles of impeachment accused him of committing perjury in a federal civil trial. In a bipartisan Senate vote, Bubba was acquitted not because he was innocent, but because the Senate didn’t feel his crimes reached the high level of removing a president from office.

The impeachments of Andrew Johnson, Richard Nixon, and Bill Clinton each had a bit of politics behind them after all Congress is a political organization. However, the overriding driver of the three impeachment efforts was some violation of the law. Impeachment was an extreme act only to be used in the most serious of cases. Rep. Alcee Hastings (D-Fl), who is on the committee that set the rules for the Wednesday action, should be well aware that Impeachment should be reserved for only the most severe of misdeeds.  Hastings was a federal judge when he was impeached for bribery and perjury by a vote of 413–3. He was then convicted by the United States Senate by a vote of 69 for and 26 against.

Alexander Hamilton predicted this might happen. In Federalist #65 he wrote: impeaching Trump

The prosecution of them, for this reason, will seldom fail to agitate the passions of the whole community, and to divide it into parties more or less friendly or inimical to the accused. In many cases it will connect itself with the pre-existing factions, and will enlist all their animosities, partialities, influence, and interest on one side or on the other; and in such cases there will always be the greatest danger that the decision will be regulated more by the comparative strength of parties, than by the real demonstrations of innocence or guilt.

Donald Trump’s impeachment was not the extreme act I learned about in HS or College. He was not impeached for a crime. Trump was impeached because the Democratic Party didn’t like him. And the drivers of this impeachment, specifically Schiff and Nadler, were trying to get rid of this President since the day he took office. They were just 130 years too late because they didn’t build a case for impeachment. Instead, they created a railroad; they railroaded this President. impeaching Trump

Despite that they had no facts or crimes to serve as a foundation to oust a duly elected president, the entire Democratic Party caucus less three voted to confirm these baseless charges. They were so unfounded Pelosi sought ways to make it seem as if they cared what they were doing to the country. Therefore, Democrats were told to wear costumes. Everyone was told to wear a somber black. When the first article was passed on a partisan basis, the Democratic Caucus began to cheer. But Nancy Pelosi shot them the stink eye that mothers use to get an immediate behavior change. Because that’s what the Democratic Party member of Congress has become—Children. They refuse to believe they didn’t get their way in 2016 because the rules set by the constitution were unfair, or he didn’t really win—he cheated. So they go for revenge. Why? Because Mama Pelosi told them what to do. Besides, most children love to play with trains, Nadler and Shiff are showing them how to railroad.

Even though she helped them, Mama Pelosi was embarrassed about her caucuses childish behavior. At her press conference the day after the impeachment vote she refused to take questions on the subject. If Mama Pelosi was pleased about the action she would not only have taken questions, she would have bragged about it, the way she took total credit for the USMCA at the same press conference despite that she contributed very little to the agreement.

So, in the end, what did the impeachment vote prove? It was a disheartening day for this wonderful country forced upon us by a class of spoiled children who showed they don’t care about this country. It also proved they don’t care about truth as there were no fact witnesses called in their investigation. Finally, it shows the Democratic Party doesn’t care about the constitution. Our founding document limits grounds of impeachment to “Treason, Bribery, or other high Crimes and Misdemeanors.” The House Democratic caucus impeached Donald Trump to stroke their fragile egos still hurt because, in the 2016 election, their candidate lost. If they had a ball, they would have taken it and gone home. Come to think of it that would have been good for America.

For more on impeachment there are two great articles at Hot Air you should read:

Jazz Shaw explains: Impeachment Is Hurting The GOP So Badly That They Just Broke A Fundraising Record

Ed Morrissey reveals: Dems Worry That Trump Can Win In 2020 Despite Impeachment