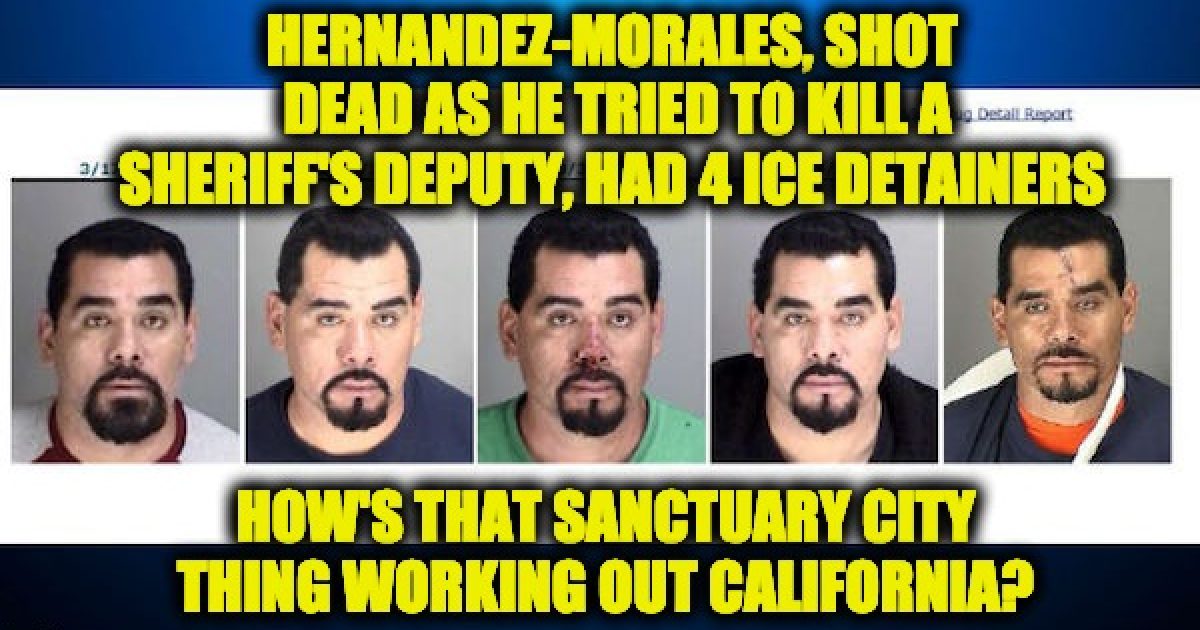 How’s that Sanctuary City/State thing working out for you California? An illegal immigrant who almost killed a Napa Valley California sheriff’s deputy had four different ICE detainers, was deported three times, and had a lengthy criminal history. None of the detainers were honored allowing Hernandez Morales to leave the county jails and remain in the U.S.

ABC 7 reported that Hernandez Morales, a Mexican national, had a criminal history including weapons violations, a DUI, and an assault on a peace officer.

ICE confirms deceased suspect in Napa shooting, Javier Hernandez-Morales was a Mexican national. He had been previously removed three times prior to 2011," says ICE, which issued 4 separate detainers. #abc7now #napa

While I call them sanctuary cities or states because it’s part of the common vernacular, the term is awful.  It’s a relatively new term because states and municipalities used to act to keep criminals under lock and key, they would never consciously break the law. But cities such as Chicago, NY, Seattle and the state of California and others that call themselves “sanctuary cities” aren’t providing sanctuary, they are aiding and abetting criminals. In most cases violent criminals.

The original meaning of sanctuary is a sacred and/or holy place like in a church, synagogue, or some sort of shrine like the Vietnam Memorial in D.C. In medieval times, people would go to Churches (sanctuaries) to avoid unfair arrests.  That’s how the term grew to include any “safe zone,”  but in its purest form sanctuary refers to a sacred area. Remember the Hunchback of Notre Dame when Quasimodo yells Sanctuary? He is trying to tell the people around him that he is in a holy place and shouldn’t be pursued further as its supposed to be a safe haven for people. It was considered against the law to break someone seeking asylum in a sanctuary.

California calls itself a sanctuary state, but releasing violent criminals into the general populations is not a holy act, especially this latest unholy example where a law enforcement officer was almost killed.

As reported by the Napa Valley Register:

The Napa County Sheriff’s Office published dramatic body camera footage Wednesday that shows part of a deputy’s fatal confrontation with a driver who shot at her.

Jarecki stood next to a red, parked car, and spoke with Hernandez Morales through a slightly open front window on the passenger’s side. The man permits her to look around. She shines her flashlight into the car and walks around the rear of the vehicle, approaching the driver’s side window.

The deputy then knocks on the front, driver’s side window.

“Roll it down,” Jarecki said.

He points a gun at her and fires at least once. Jarecki radios that shots have been fired as the car’s rear lights flash. The ignition turns over and Jarecki, who appears to have retreated to the passenger side of the vehicle, fires numerous rounds toward the driver’s seat.

She radioed that shots had been fired at 11:05 p.m., the Sheriff’s Office said. Within minutes, social media was abuzz with locals listening to the police scanner

You mean all of those gun control laws didn’t prevent a criminal from getting a gun?

California is not a sanctuary state, it is an aiding and abetting state, or harboring criminal state.

Warning: This video contains graphic content and is NOT suitable for children. This is video evidence of a well-trained officer doing their job. She wasn’t taking any chances, she unloaded her full magazine on him. Deputy Jarecki was not physically injured. Hernandez Morales died at the scene.

Parts of this post were first seen at GodfatherPolitics