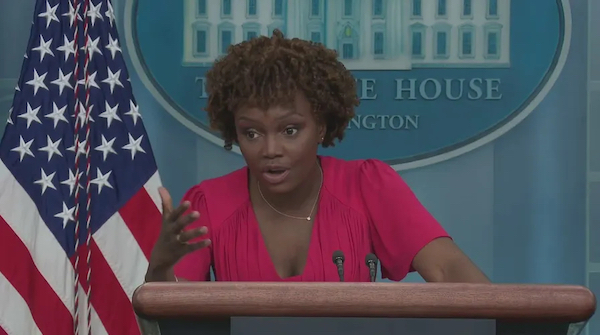 Four short months ago, I warned the Jen Psaki haters that the incoming White House press secretary was going to be worse than the redhead. Karine Jean-Pierre, the Republican-hating, low-IQ leftist, has proven me correct.

Despite never being challenged by any non-Fox News member of the press corps, Jean-Pierre still comes across as inept and foolhardy.

Recently, Sen. Ted Cruz invited President Joe Biden to finally visit the Mexico-United States border and see the tragedies her White House created and ignored. Cruz is notorious for craving attention, but this was a reasonable suggestion.

In response, Jean-Pierre angrily responded, “I certainly don’t need lectures or invitations from Republicans about the border or border policies.”

What did the “glass shattering” fool mean?
v

Apparently, in 2018, as the Trump administration was “tearing babies out of their mothers’ arms,” Jean-Pierre supposedly visited on behalf of hard left moveon.org, where she worked.

Her mythical experience offered no plan, of course, and her lies will never be fact-checked.

Meanwhile, more innocent lives will be lost because of the Biden administration’s utter cruelty. They are causing intense suffering and actually do have blood on their hands.

Earlier this month, KJP laughingly argued that Democrats — the party of teachers unions and shutdowns — reopened schools “in spite of Republicans.”

This was egregious gaslighting on a Democrat-created catastrophe.

Fox News easily debunked her claim that their “American Rescue Plan” led to school reopenings since school districts tapped into a minuscule 12% of the program’s funds.

Her statement is counter to everything Americans witnessed, with red state governors reopening schools far more quickly than their blue state counterparts.

Jean-Pierre, who’s likely not been challenged much in her life due to her triple woke credentials — black, female, gay  — smirked that she knew this question was coming.

Did she have a rock-solid answer?

“Let’s be really clear, that comparison you made is just ridiculous,” she told Doocy.

So when KJP or Stacey Abrams or Hillary Clinton deem an election stolen or rigged, that’s fine; but when MAGA Republicans do it, it’s a “threat to democracy”?

We simply are denied explanations every time Jean-Pierre stands at the lectern.

Are nearly 75 million people incipient fascists, or just those jackasses who rushed the U.S. Capitol on Jan. 6? And if so, why did Democrats spend over $50 million this year to promote those “democracy deniers” in the just-completed GOP primaries?

Nobody knows since the story constantly changes.

Like her predecessors, Jean-Pierre’s job as a spokesperson is not easy. Biden consistently speaks in a hypocritical and tortuous fashion. She then must decipher his gobbledygook, though you’d think a communications team would be slightly less convoluted.

Psaki had a bad relationship with honesty; however, when she put words together, they sometimes came out coherently. Even for a risible administration that’s hampered our military, the economy, the southern border, foreign allies, the energy sector, schoolchildren, and the legislative process, we deserve better than the execrable Karine Jean-Pierre.