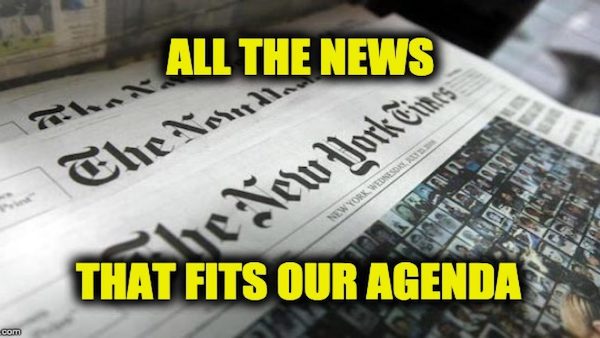 How can the New York Times be considered credible when it’s printing news reports that contradict its own reporting from just a few years ago? hypocritical NY Times

Daniel Victor at the New York Times is a reporter — not an opinion writer — who wrote an article that was downplaying the claims of the Trump administration and many right-wing pundits about voter fraud.

The thing is, many of the lawsuits filed by the Trump administration contesting the results of the 2020 election have anything to do with “voter fraud” per se — but about the irregularities and lack of transparency in the voting process in particular jurisdictions.

But let’s ignore that for a second and get straight into Victor’s 2020 article.

The specter of widespread voter fraud has been a cornerstone of President Trump’s efforts to dispute the Nov. 3 election should he lose. A New York Times Magazine investigation published on Wednesday has found that the idea, based on a flimsy set of sensationalist, misleading, or outright false claims, was intentionally planted in the public discourse as part of a decades-long disinformation campaign by the Republican Party and outside actors…

…Despite the attention paid to it by administration officials and right-wing media, voter fraud is a largely nonexistent problem. Law enforcement investigations have repeatedly failed to find major wrongdoing in cases hyped for political gain, often based on sloppy data analysis.

I guess that the New York Times was part of that disinformation campaign when they published an article in October of 2012 titled, Error and Fraud at Issue as Absentee Voting Rises.

That’s kind of weird, actually, since the article itself takes aim at Republicans who, apparently at the time, tended to use absentee ballots more frequently than Democrats. In contrast, Democrats opted for early voting in-person. That’s an interesting note.

The article also quite clearly states that there was bipartisan concern over the problems inherent in absentee voting.

There is a bipartisan consensus that voting by mail, whatever its impact, is more easily abused than other forms. In a 2005 report signed by President Jimmy Carter and James A. Baker III, who served as secretary of state under the first President George Bush, the Commission on Federal Election Reform concluded, “Absentee ballots remain the largest source of potential voter fraud.”

On the most basic level, absentee voting replaces the oversight that exists at polling places with something akin to an honor system.

It says that absentee ballots are more often deemed invalid and are therefore not counted at a higher rate than in-person ballots.

“Absentee voting is to voting in person,” Judge Richard A. Posner of the United States Court of Appeals for the Seventh Circuit has written, “as a take-home exam is to a proctored one.”

The article then explains the process of “granny farming,” whereby people “help” voters in senior centers fill out their ballots.

“The problem,” said Murray A. Greenberg, a former county attorney in Miami, “is really with the collection of absentee ballots at the senior citizen centers.” In Florida, people affiliated with political campaigns “help people vote absentee,” he said. “And help is in quotation marks.”

Voters in nursing homes can be subjected to subtle pressure, outright intimidation or fraud. The secrecy of their voting is easily compromised. And their ballots can be intercepted both coming and going.

The problem is not limited to the elderly, of course. Absentee ballots also make it much easier to buy and sell votes. In recent years, courts have invalidated mayoral elections in Illinois and Indiana because of fraudulent absentee ballots.

Oh, you mean like what the kind of stuff that Project Veritas is exposing?

Huh. Would you look at that!