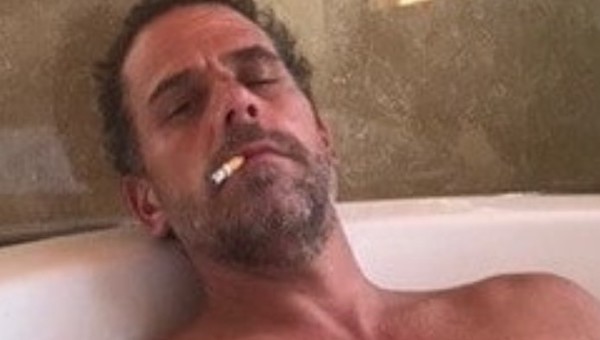 If the media hadn’t worked so hard to discredit and suppress true stories about Hunter Biden, his dad would never have won the election.

That isn’t speculation. It’s one of the things that post-election battleground state polling revealed about Biden voters. Enough would have turned their back on him that he wouldn’t have carried any of the battleground states. (That’s leaving aside some of the damning objective evidence Dinesh D’Souza has put into his latest documentary.)

When Joe first announced he was running, many of us on the right thought he’d be a nightmare candidate… not just because of his personal failings but because of the baggage Hunter brought with him.

Even before we came to impeachment, we knew about Burisma and the money Hunter made in some big deals with China. We knew or thought we knew about the pay-for-play rackets that several families of highly-placed politicians (often, but not exclusively, Democrat) had their fingerprints on. Tellingly, even Hunter himself admitted that he probably would not have gotten his job opportunities but for the fact that his father was an influential politician.

More evidence of Hunter’s corruption and financial dealings with foreign oligarchs surfaced during the first impeachment — and other evidence should have. Including exculpatory evidence which should have been provided to Trump in his defense, as reported by John Solomon, who has been on this case for years.

In an email kept from public view for more than five years, a top U.S. State Department official in Kiev wrote to Washington superiors at the end of the Obama-Biden administration that Hunter Biden’s business dealings in Ukraine “undercut” U.S. efforts to fight corruption in the former Soviet republic.

The email, obtained by Just the News, was written on Nov. 22, 2016 by former U.S. embassy official George Kent, one of the Democrats’ star witnesses in their first effort to impeach former President Donald Trump.

It was classified “confidential,” the lowest level of secrecy, by then-U.S. Ambassador to Kiev Marie Yovanovitch, another of the Democrats’ impeachment witnesses, and was not produced as evidence to House lawmakers during impeachment. Contrary to federal law, the State Department failed to acknowledge the existence of the document to the court or to Just the News in its multiple Freedom of Information Act lawsuits against the State Department seeking records on Hunter and Joe Biden’s dealings in Ukraine.

Most importantly, the email’s stark message directly conflicts with the narrative the mainstream media, State Department witnesses and Democratic congressmen gave the public two years ago, when they insisted Hunter Biden’s lucrative job with the allegedly corrupt Ukrainian gas company Burisma Holdings — while creating the appearance of a conflict of interest — had no impact on U.S. efforts to fight corruption in that country.

In the Nov. 22, 2016, email, former State Department official George Kent, then the deputy chief of mission at the US Embassy in Ukraine, recounted a discussion in which he detailed the “saga” surrounding the graft case against Mykola Zlochevsky, a former Ukrainian natural resources minister and founder of Burisma Holdings, which paid Hunter Biden $1 million a year to sit on its board.

Kent recalled saying “that the real issue to my mind was that someone in Washington needed to engage VP Biden quietly and say that his son Hunter’s presence on the Burisma board undercut the anti-corruption message the VP and we were advancing in Ukraine.”

“Ukrainians heard one message from us and then saw another set of behavior, with the family association with a known corrupt figure whose company was known for not playing by the rules in the oil/gas sector,” Kent added.

Who was in the White House in November of 2016? Oh, right, the ‘Joe-bama’ administration. Funny how this email somehow stayed buried during Impeachment proceedings, isn’t it?

We’ve come to the moment where even hyper-partisans a the NYTimes can’t sweep Hunter’s sketchy behavior under the rug anymore… and are going to court over FOIA-ed emails involving Hunter’s business dealings.

First, there are (and have been for several years) evidence-based credible corruption allegations against the Biden family itself.

Second, the alphabet agencies that should have been responsible for investigating allegations of corruption and fraud have been complicit in concealing the evidence that would substantiate such allegations.

There is a lot of data from the last few years to make us doubt the political objectivity of federal law enforcement.

Just off the top of this writer’s head, we could draw our lessons from the tarmac meeting, Hillary’s emails, Crossfire Hurricane, General Flynn, the public discrediting of journalists like John Solomon who were looking into the Ukraine corruption allegations, the demonstrably dishonest under-oath testimony of Trump’s public-servant accusers during impeachment, the falsified allegations of both the leaked phone call used as the premise of Ukraine impeachment and the falsified narrative around Trump’s election result phone call (that WaPo belatedly walked back) that provided the single basis for the one charge named in the second impeachment, FBI arresting Project Veritas journalists and leaking their phone data to the NYT, the Whitmer kidnapping plot, Ray Epps, not to mention the disparate treatment of the railroading of Jan 6 protesters and the dismissal of charges against BLM/Antifa rioters.

Simply put, once-trusted Federal agencies have become little more than the police-state enforcement arm of the Democrat Party. If that statement seems shocking or extreme, you don’t need to look back very far. Just look at the coordination between the White House, the Teachers’ Union, and the cooperation of the Feds in tagging parents whose great ‘crime’ was speaking up at school board meetings as terrorists.

It’s time for accountability, and the NYPost editorial board is putting their necks on the line in demanding it.

It’s past time for Garland to explain why he hasn’t named a special counsel.

This idea has been batted around at least since Hunter’s smelly art sales surfaced. And the drip of damning news has only continued: a former business partner “co-operating completely” with the feds; congressional allegations that the Secret Service improperly redacted records relating to Hunter’s travels; news that Hunter’s bank records on his dealings with the Bank of China were subpoenaed in May 2019.

That is, the feds have been looking at Hunter since the Obama administration. Given all this, Biden should have put the probe under impartial supervision long ago. In between, Justice has managed to fully investigate, for example, everything about then-President Donald Trump’s supposed collusion with Russia — albeit via a special counsel.

And: Can you imagine the howls of outrage if Trump had inherited an investigation of Eric or Don Jr. in his first term and left it in the hands of a Justice Department staffed by his own appointees?

Unless and until Garland produces an explanation for why he’s avoided an independent prosecutor, or his minions actually bring charges, Americans have every reason to suspect politics is standing in the way of justice.