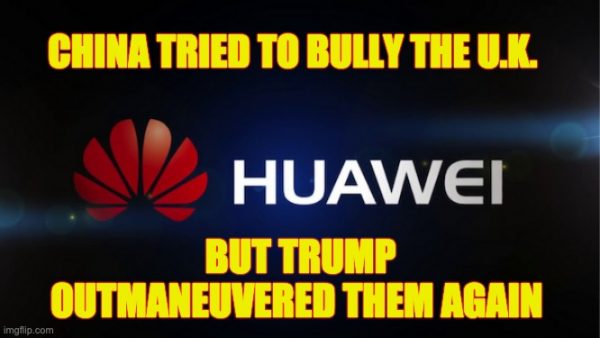 Why on God’s green earth would Trump want to reverse a policy banning the financing of overseas nuclear power? Because it made perfect strategic sense. Huawei

You see, according to a document released by Pompeo, China had been twisting the arm of one of our strategic allies to get things they desperately wanted.

Simply put, China is a bully--that’s not just our opinion, it’s the State Department’s opinion. Especially since the Chinese communists went after the U.K. Perhaps they didn’t realize while we did a Brexit in 1776, we’ve been close friends with the British since we beat them in the War of 1812.

The United States stands with our allies and partners against the Chinese Communist Party’s coercive bullying tactics. In the latest example, Beijing has reportedly threatened to punish British bank HSBC and to break commitments to build nuclear power plants in the United Kingdom unless London allows Huawei to build its 5G network. Shenzhen-based Huawei is an extension of the Chinese Communist Party’s surveillance state.

The CCP’s browbeating of HSBC, in particular, should serve as a cautionary tale. Just last week, the bank’s Asia-Pacific CEO, Peter Wong, a member of the Chinese People’s Political Consultative Conference, signed a petition supporting Beijing’s disastrous decision to destroy Hong Kong’s autonomy and to break commitments made in an U.N.-registered treaty. That show of fealty seems to have earned HSBC little respect in Beijing, which continues to use the bank’s business in China as political leverage against London.

Beijing’s aggressive behavior shows why countries should avoid economic overreliance on China and should guard their critical infrastructure from CCP influence. Australia, Denmark, and other free nations have recently faced pressure from CCP interests to bow to China’s political wishes. The United States stands ready to assist our friends in the U.K. with any needs they have, from building secure and reliable nuclear power plants to developing trusted 5G solutions that protect their citizens’ privacy. Free nations deal in true friendship and desire mutual prosperity, not political and corporate kowtows.

That’s diplomatic for “get your freaking hands off our buddy!”

But that’s only half the story. Here is the news story that just happened to come out the same day.

The Trump administration is rescinding an Obama-era ban on the federal government providing financing for civilian nuclear energy projects abroad, the Washington Examiner has exclusively learned.

The U.S. International Development Finance Corporation is proposing this week to reverse a ban that prevents it from funding civil nuclear projects overseas. The agency will take 30 days of public comment on the proposed policy change.

“Access to affordable and reliable power is essential for developing countries to advance their economies,” Laura Allen, a spokeswoman for the DFC, told the Washington Examiner. “This change would bring advances in technology and offer a zero-emission power source to the developing world while serving as an alternative to the predatory financing of authoritarian regimes.”

The move delivers on a longtime request from Senate Energy Committee Chairwoman Lisa Murkowski, a Republican, and her colleague Joe Manchin, the panel’s top Democrat, who argued that the prohibition “sends a harmful signal that American primacy in the civil nuclear sector is waning.”

“Nuclear energy technology can help meet the world’s clean energy needs,” Murkowski told the Washington Examiner in reaction to the policy change Tuesday. “Our energy future is global, and steps like this DFC decision are crucial to meeting climate and energy leadership goals. Lifting this prohibition will simultaneously strengthen the U.S. economy while boosting international relations and global energy security.”

Why are those two stories connected? Well, it could be a coincidence…if one believes in coincidences (I don’t). Here’s the real reason.

China would LOVE to get Chinese Telecom companies into the 5G market into any of the member countries of the Five-Eyes Intelligence Alliance (USA, UK, Canada, Australia, New Zealand). By rescinding the order, Great Britain can tell China to stuff it because the U.S. will help our British ally build their nuclear plants.

If our information is flowing across the Chinese network and/or using Huawei phones, China will be able to monitor and manipulate the information flow. Which is why President Trump took action to prevent Huawei from elbowing into the U.S. market.

In May of 2019, the President signed an executive order that gave the Dept. Of Commerce 150 days to generate rules to identify “particular countries or persons” as foreign adversaries. In other words, come up with a way to stop Huawei or any other China telecom company from controlling U.S. cell phones. As a result, Huawei was put on a U.S. blacklist known as the Entity List, the Commerce Dept. version of “double (not so) secret probation,” because we do not want China to have unfettered access to our information flow.

The list stops American companies from doing business with those people or firms on the list without first getting U.S. Govt. permission. Before being placed on the government’s list, Huawei used the licensed Google Android operating system on its mobile devices. Now they can’t sell their phones in the U.S. until they develop their own operating system–if they do.

Opening this up just ‘happens’ to break the leverage China can bring to bear upon the U.K., twisting Great Britain’s arm to allow Communist China’s Telecom to control its 5K network.