Heh! Clinton Confidante Suggests ‘Illegitimate’ Trump Should Be Tossed Out & Replaced By Hillary 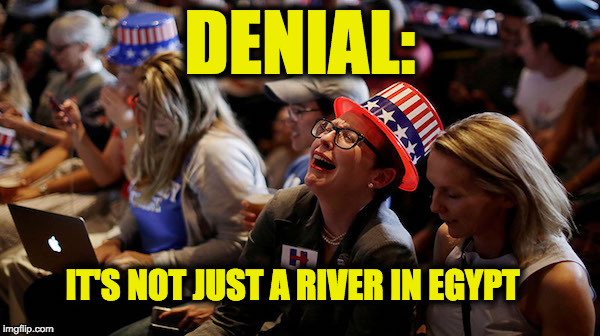 Dang! These Democrats are stuck in denial, still hanging on to the fake story that somehow Donald Trump is an illegitimate president and Hillary Clinton should be in the White House. Guys it’s over…the election was in November…it’s almost April.

But that doesn’t matter, They are somehow still convinced that Vladimir Putin and the Russians stole the election from Hillary Clinton. Despite the fact that research published in the scholarly journal: “The Forum: A Journal of Applied Research in Contemporary Politics” explained the real reason why Hillary Clinton lost the campaign. Her loss had nothing to do with FBI Director Comey, or Vladimir Putin. The reason for Hillary’s loss is what we all knew but those Democrats refuse to accept, she ran a really crappy campaign. As a matter of fact the study found that Hillary’s 2016 presidential campaign was “without a doubt one of the worst-run political operations in years.”

For example in the rust belt states where President Trump earned surprise wins (Wisconsin, Michigan, and Pennsylvania), the Clinton campaign didn’t advertise until the very end when it was obviously too late. Trump advertised at lower levels, but began much earlier which gave his ads time to build and convince.

But the truth doesn’t matter especially to one of the people closest to Hillary Clinton who is regurgitated thes outdated and debunked talking points about Wikileaks and Russia during a Twitter hissy fit in which he also called for Trump to be removed as President to be replaced by, you guessed it, Hillary Clinton.

“Peter Daou, an adviser to Hillary Clinton’s 2008 presidential campaign, got a lesson in basic constitutional law Sunday after he suggested that President Donald Trump be overthrown and replaced with Clinton.

“Daou made the suggestion as the 23rd tweet in a 25-tweet rant, where he attempted to lay out the case that last year’s presidential election was hacked by Russia to benefit Trump over Clinton, making it the ‘biggest political scandal in US history.’

“Daou said that if the investigation into alleged collusion between Russia and the Trump campaign yields evidence, then the scandal will become a ‘full-blown Constitutional crisis.’ It’s Daou’s suggestion on what to do next that has people on social media mocking him.

“’At that point, the only fair and just resolution is to have popular vote winner Hillary Clinton take office. Or to hold a new election,’ Daou tweeted.” 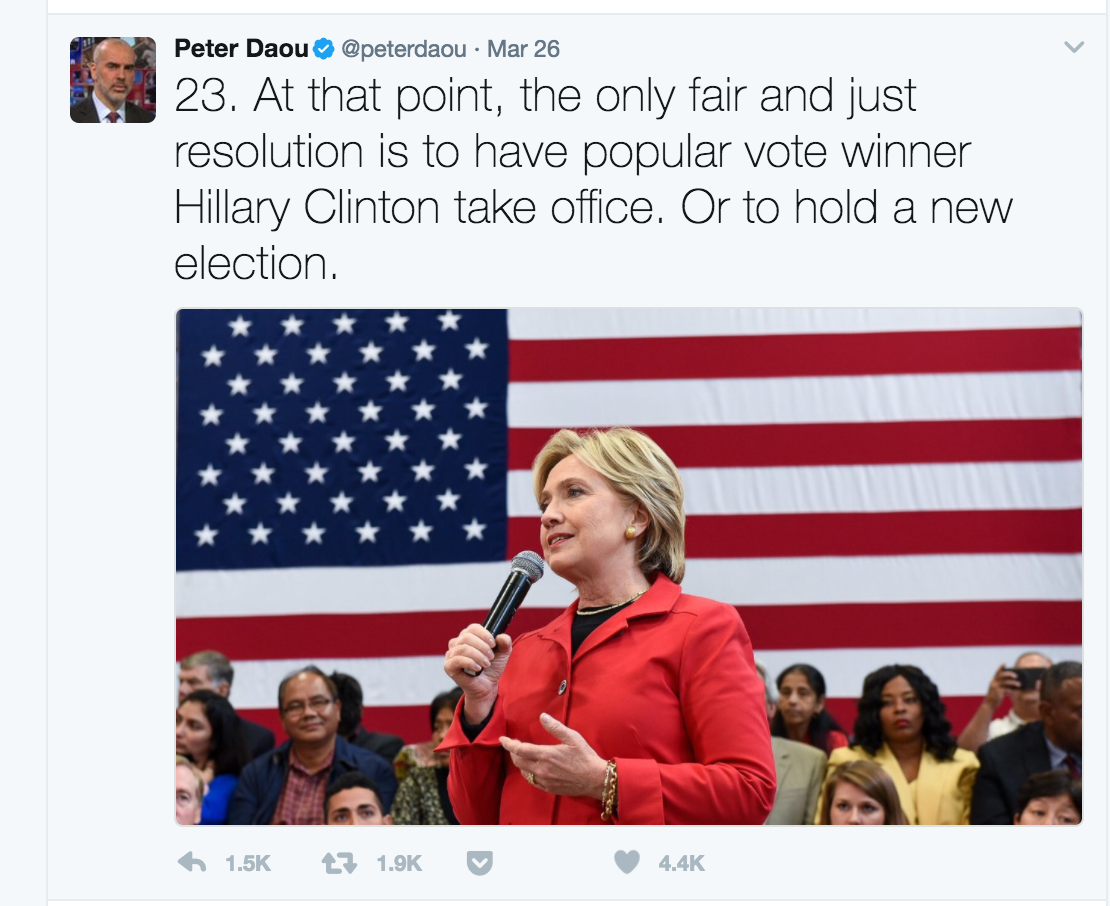 This is the unfortunate state of our political realm in this day and age.  The left, spurred on by delusional democrats, are refusing to accept the will of the American people who were so very fed up with business as usual in Washington, combined with a horribly managed campaign that ignored the voters who gave Trump the win.. resulted in the voters sending Hillary packing.  Now, even months after the dust had settled and the smoke had cleared, they are concocting ways to undermine our nation’s leadership in a selfish and destructive cacophony of unhinged social media word vomit.