Not So Fast Liberals, Hillary Clinton Once Warned She Would “Totally Obliterate” Iran

Whatever stage of development they might be in their nuclear weapons program in the next 10 years during which they may foolishly consider launching an attack on Israel, we would be able to totally obliterate them.” –Hillary Clinton 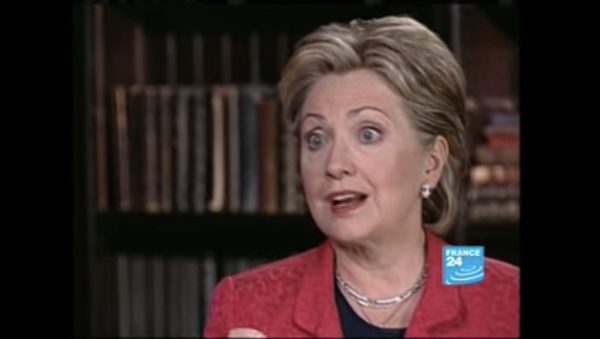 When President Trump decides to counter an attack on an American embassy, leftists are up in arms. Hillary Clinton Iran

But look above to what their failed 2016 Presidential candidate once said.

National security and security of our allies is not about politics.

It is about American interests and global justice.

Failed presidential candidate Hillary Clinton warned in 2008 that she was prepared to “obliterate” Iran if it produced a nuclear weapon and promised to retaliate if the country launched a nuclear attack on Israel.

But Clinton may have forgotten her own hawkish rhetoric during the 2008 primary.

Ahead of the Pennsylvania Democratic primary that April, Hillary Clinton was asked by Good Morning America what she would do if Israel was attacked by Iran.

“If Iran were to launch a nuclear attack on Israel, what would our response be?” Clinton said in an interview with then-host Chris Cuomo. “I want the Iranians to know that if I’m the president, we will attack Iran. That’s what we will do. There is no safe haven.”

She also warned that if Iran developed a nuclear weapon, the United States had the power to “totally obliterate” the country.

“Whatever stage of development they might be in their nuclear weapons program in the next 10 years during which they may foolishly consider launching an attack on Israel, we would be able to totally obliterate them,” she said.

She admitted that her comment was “terrible” but said it was important to “deter” Iran from attacking Israel.

At the time, Sen. Barack Obama criticized Clinton for sounding like a warmonger.

Of course Obama, in his infinite wisdom, scolded Hillary and went on to lay out the red carpet for Iran.

Birds of a feather.

Don’t forget to throw Jimmy Carter into that nest.’

Of course, Hillary was talking about defending our ally Israel, which is important. Trump’s move was about protecting Americans which comes first.

So why is Trump wrong in the eyes of the left?

If Clinton won the election and launched the same retaliatory attacks, American Media would be celebrating her as the President who finally had the courage to stand up to Iran.

That is a fact.