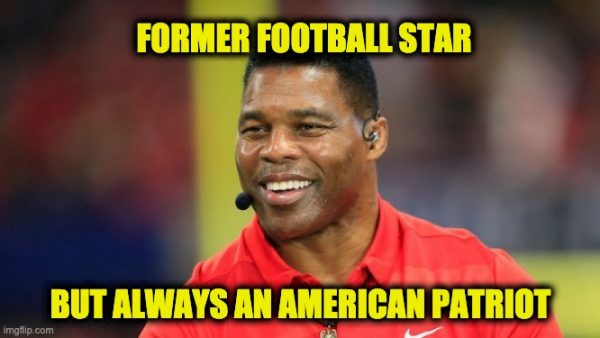 Former NFL Star Herschel Walker took aim at Joe Biden after the Democrat nominee for President said George Floyd’s death had a greater impact on the world than the assassination of Martin Luther King, Jr.

Walker, Heisman Trophy winner who started his pro career playing for the New Jersey Generals of the USFL, a team that was owned by some guy named Donald J Trump. After his three years in the USFL, the league went out of business so the running back moved to the NFL where he played for 11 years, most noticeably with the Dallas Cowboys.

Biden’ s comparison angered Walker. He also hammered Biden on his record on helping the black community while he was at it.

“Someone inform [Biden] not to compare the death of Dr. King and George Floyd,” he wrote in a social media post over the weekend. “He has been in office a very long time, and not once has he tried to change anything for black lives.”

Walker then urged followers to simply look at Biden’s record for proof.

Someone inform @JoeBiden not to compare the death of Dr. King and George Floyd. He has been in office a very long time and not once has he tried to change anything for black lives. Look at his voting records! @FoxNews @CNN @realDonaldTrump @POTUS @FoxNews @MSNBC
@seanhannity

Yes, He Actually Said It

First off, some of you may be thinking “There is no way, as out of his own mind as he might be, that Biden actually said this, it’s such a stupid comparison.” But you, my friend, would be wrong,  Joe Biden and stupidity is such a happy union.

“Even Dr. King’s assassination did not have the worldwide impact that George Floyd’s death did,”

Biden said during a round table discussion in Philadelphia last week.

Thinking more drivel from his mouth would help to contextualize what he was saying, Biden continued.

“Because just like television changed the civil rights movement for the better when they saw Bull Connor’s dogs ripping the clothes off of elderly black women who were trying to go to church, and fire hoses ripping the skin off of young kids,” he said.

“What happened to George Floyd, now you’ve got how many people around the country? Millions of cell phones, it’s changed the way everybody’s looking at this,” Obama’s former vice president claimed. “Look at the millions of people marching around the world.”

George Floyd’s murder was awful, but I would venture to guess many millions more were impacted by King’s death and what he stood for.

Joe Biden: “Even Dr. King’s assassination did not have the worldwide impact the George Floyd’s death did.” ? pic.twitter.com/b9LzB9bbNq

Let’s do as Walker suggests, and examine Biden’s record when it comes to race relations in America.

That’s the guy the left wants you to believe will be a great unifier.

Then, of course, there is this: Biden once bragged about receiving an award from George Wallace, said Delaware was on the South’s side in the Civil War and touted that Delaware was a “slave state” as recently as 2006.

REMINDER: Joe Biden in 1987 via the Philadelphia Inquirer.

"campaigning in Alabama in April, Biden talked of his sympathy for the South; bragged of an award he had received from George Wallace in 1973 and said ‘we (Delawareans) were on the South's side in the Civil War.’" pic.twitter.com/fzENX1tEqT

Walker, meanwhile, is an interesting figure. He has been adamantly opposed to kneeling by NFL players during the National Anthem, something that will no doubt increase in the upcoming season directly because of what happened to Floyd.

Walker, who says he’s perfectly content with people who want to demonstrate for equality or injustices, has said pre-game ceremonies involving the American flag are neither the time nor the place.

He called for a rule to be implemented banning taking a knee while the flag is being honored.

Unfortunately, NFL Commissioner Roger Goodell has gone full politically correct vs, doing the right thing. As he indicated that he will encourage protests while even urging teams to sign cop-hater Colin Kaepernick.

Walker also had a great idea for the “defund the police” movement.

I have an idea…

For all these people who don’t want any police, I’d love to meet with American Airlines, Delta, and Southwest and make a deal to fly them to countries that don’t have police. I want them to be happy! @CNN @FoxNews @DonaldJTrumpJr @POTUS @espn

I would vote for that one.