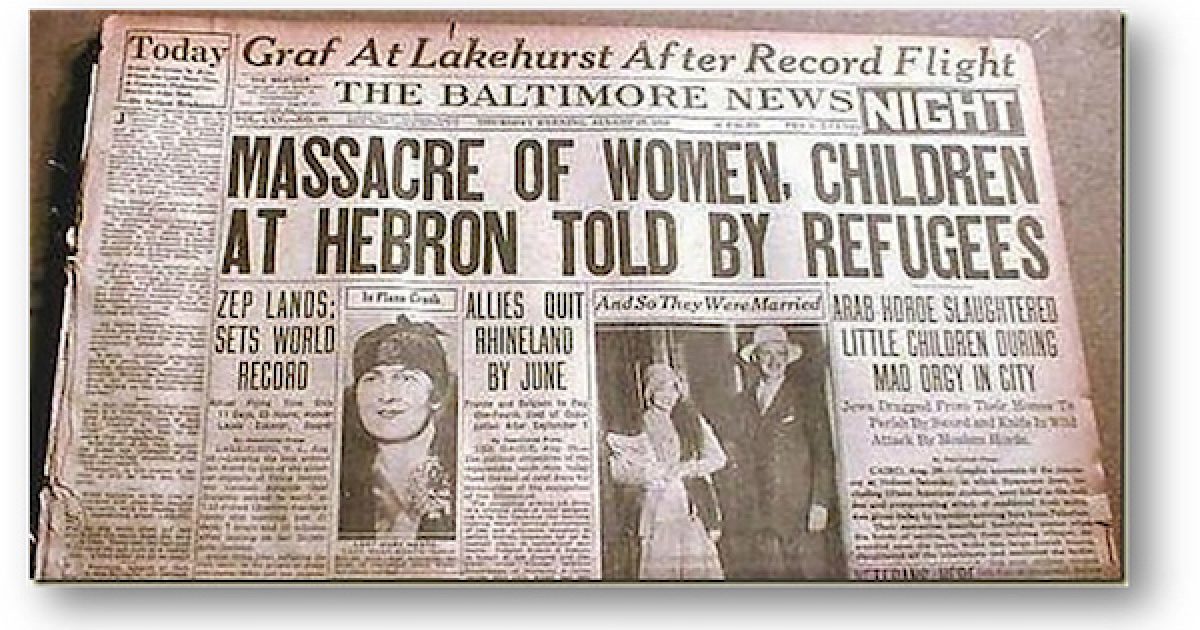 The city of Hebron in Israel gas been occupied territory for nearly a century. But not in the way everyone thinks  Hebron is a Jewish city occupied by the Arabs. Hebron’s occupation began on a Friday evening in August 90 years ago when a group of Arab terrorists massacred the Jews of the city while the British who ruled over the Holy Land watched it happen didn’t lift a finger to prevent the carnage.

Hebron was the first piece of land ever purchased by the Jews in Israel. Approximately 38 centuries ago, Avraham (Abraham) the forefather of the Jewish faith, purchased a cave in Hebron to bury his beloved wife, Sarah. Abraham overpaid so no one could deny it was his fair and square.

When Abe passed away, he was buried there also. Eventually, Abraham’s son Isaac and his wife Rebekah, Jacob and one of his wives Leah, and Jacob’s brother Esau’s head was also buried in the cave.  The Jews had owned the land in that city from that sale of the cave to Abraham until 1929, and they were the majority of the population most of that time.

Three days before the massacre, Davar newspaper of August 20, 1929, reported:

persons that on Saturday last the Jews cursed the Moslem religion and that it is the duty of Moslems to take revenge.

On Friday night, August 23rd, Rabbi Ya’acov Slonim’s son invited any fearful Jews to stay in his house. The Rabbi was highly regarded in the community, and he had a gun. Many Jews took him up on this offer, and most of those Jews were murdered in his home

On Saturday morning, before the slaughter began, the Rabbis again appealed to the Governor for help. Again they received the same astounding assurances. Bewildered, the Jews turned to Mr. Cafferata, the British officer in charge of the Police. From him, too, they received assurances of safety.

Just then, God, blessed be He, in His great mercy, sent us an Arab who lived in back of our house. He insisted that we come down from the doctor’s apartment and enter his house through the back door.  He took us to his cellar, a large room without windows to the outside. We all went in, while he, together with several Arab women, stood outside near the door. As we lay there on the floor, we heard the screams as Arabs were slaughtering Jews. It was unbearable. As for us, we felt that the danger was so great that we had no chance of coming out alive. Each one of us said his vidui [his confession in anticipation of death]. At any moment we could be slaughtered, for double‑edged swords were already at out throats. We had not even the slightest hope of remaining alive. We just begged that it should already be done and over.

In all sixty-seven Jews were killed and another fifty-eight were injured.

When the massacre finally ended, the surviving Jews resettled in Jerusalem. Some Jewish families tried to move back to Hebron but were removed by the British authorities in 1936 at the start of the Arab revolt. In 1948, the War of Independence granted Israel statehood, but further cut the Jews off from Hebron, a city that was captured by King Abdullah’s Arab Legion and ultimately annexed to Jordan.

When Jews finally gained control of the city in 1967, a small number of massacre survivors again tried to reclaim their old houses. Then defense minister Moshe Dayan told the survivors that if they returned, they would be arrested and that they should be patient while the government worked out a solution to get their houses back. Dayan never got around to it–I guess he was too busy giving away Jewish rights to the Temple Mount.

On that Sabbath, in 1929, the first Jewish city became occupied territory. More than that, the Jews of Israel and worldwide learned that they cannot rely on anyone else for protection.

Some 90 years later that memorial still rings true. Arab terrorists are still attacking innocent Jews in Israel. The United Nations simply watches and most of the time blame Israel. The world body even claims the first Jewish city, part of which was purchased by the Jewish Patriarch Abraham doesn’t belong to the Jews.

TheHebron massacre taught the future state of Israel is that she can never fully trust any other nation, even a reliable friend such as America. Donald Trump is a great friend in the White House, but he was preceded by Obama, a president of whom many would describe as an enemy of Israel and Jews everywhere. The Jewish State must protect herself as she deems appropriate because when push comes to shove history has taught the Jews just like 90  years ago in Hebron, just like Obama taught the Jews during his administration if Israel doesn’t protect herself..no one else will.