Can A President Be Impeached Because He Likes Corn Muffins?

In The Days Of Adam Schiff, Jerrold Nadler, and Nancy Pelosi, If The POTUS Is A Republican---Probably 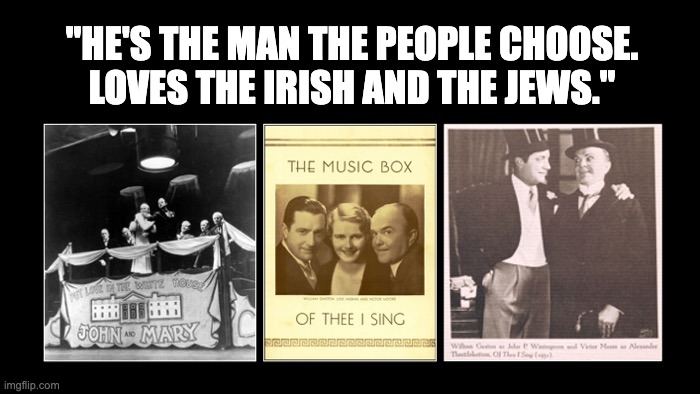 Can a President be impeached because he likes corn muffins? Well, if Adam Schiff, Jerrold Nadler, and Nancy Pelosi are involved, the answer is most probably yes. Come February, they will most likely be working on their third annual concocted impeachment of Donald Trump for the same reason as the first two—they don’t like him.  But this post isn’t about an actual impeachment. It’s about one that happened on Broadway.

Note: Because the play doesn’t differentiate between impeachment and a Senate trial, neither does this post.

Ninety years ago, on  December 26th, 1931, the most biting political satire ever written opened at the Music Box Theater on Broadway. Called Of Thee I Sing, it was the first successful American musical with a consistently satiric tone. What made it work was it captured the political feelings of the day. Today’s political sentiments are very similar.

Interestingly we see some of the same movements today that were “popular” in the early 1930s. Specifically the Democratic Party’s embrace of socialism and the two phony impeachments.

During the worst years of the Great Depression, between 1930 and 1935, America had a great attraction to socialism thanks to the Soviet Union and the American Communist Party. While not a socialist, when FDR became President in 1932, he adapted some of the big government socialist agenda, and they worked–for a bit. In 1937 the US faced a recession almost as bad as the Great Depression of 1929. Despite what some claim, the economy didn’t correct itself until World War II forced the government to ease up on regulation and allow companies to do their jobs (sound familiar) supporting the war effort.

In the environment of the worst years of the depression, Of Thee I Sing was produced. But in today’s climate of identity politics, and the radicalism of the Democratic Party, and the Shifty Schiff-led impeachments,  Of Thee I Sing, is just as relevant and biting today as it was in 1931. The play lampoons identity politics lampoons a political system too tied up in personalities and silly minor issues to fix the country’s economy, and an impeachment of the President for nonsense reasons, and how a completely gullible American people can be controlled at the hands of an excellent political media spin (sound familiar?). It speaks to politics today and is long overdue for a Broadway revival.

Of Thee, I Sing was so biting, so satirical, that the writers and cast of the play and were unsure of what the public’s reception would be, prompting one of the writers of the book, George S. Kaufman,  to quip, “Satire is what closes on Saturday night.” Ah, but it didn’t close. In fact, Of Thee, I Sing was the first musical to win the Pulitzer Prize.

The creative team behind the musical was like a Broadway All-Star team. The book was written by George S. Kaufman (You Can’t Take it With You) and Morrie Ryskind. The team’s previous collaboration was Animal Crackers, a Broadway musical written for the Marx Brothers (Ryskind went on to write many of the Marx Brothers movies).

George and Ira Gershwin wrote music and lyrics. George Gershwin was arguably America’s most celebrated composer of music at the time. He wrote everything from musicals to opera to classical music and ballet. His brother, Ira Gershwin, is one of the American musical’s greatest lyricists, who wrote for stage and screen (including the original A Star is Born).

The play tells the story of presidential candidate John P. Wintergreen. As his campaign song says,” he’s the man the people choose, loves the Irish and the Jews (music below).”


For Vice President, the choice is Alexander Throttlebottom, a man best known for gaffes (sound familiar) and who throughout the play gets thrown out of important meetings because, despite the fact, he is the vice president. Because one knows who he is. As one of FDR’s VP John Nance Garner said, “the vice presidency is not worth a bucket of warm spit.” The difference between then and now is we have a VP who believes any project she gets from the POTUS is not worth a bucket of warm spit.
For the Wintergreen political campaign, the party elite (specifically political bosses Louis Lippman and Francis X. Gilhooley, newspaper magnate Matthew Arnold Fulton, Senators Carver Jones, and Robert E. Lyons) selects a political platform meant to avoid political controversy– the “love platform.” The party elite decides their candidate, bachelor Wintergreen needs to get married, so they hold a beauty contest. The selected winner is a sultry southern belle, Diana Deveraux.

As with most campaigns, the candidate throws a wrench into the plans. In this case, he refuses to marry the contest winner. Right after Miss Deveraux is announced as the winner, candidate John P. Wintergreen stops the pageant because he has fallen in love with the all-American Mary Turner, whose primary qualification is… well:

Okay, that part might not please today’s woke culture.

After hearing candidate Wintergreen’s “heartfelt” announcement about falling in love with Mary Turner, American voters are so happy they exclaim (and sing) “Love is Sweeping The Country,” and of course, Wintergreen and his Mary win the election.

Of course, the inauguration and wedding ceremonies are combined. And the President sings the title song declaring his love for the new bride (it is a musical, after all).

Immediately after the combined inauguration/wedding ceremony, the opposite party looks to impeach the new couple.  Ms. Deveraux shows up to tell her story of winning the contest and being jilted by the new President because she is “Jilted, Jilted, I’m a flower that’s wilted.”

Since John Roberts was not Chief Justice back then, the Court actually reached a decision. The Court decides corn muffins are more important than justice.

France is not happy, so the political operatives decide to have the President impeached to placate the French. Yes, it’s a stupid reason for impeaching the President. But when one thinks about it, Adam Schiff would believe it’s an excellent reason these days. The Senators begin their impeachment roll call (in song, of course). But first, they show their joy in being able to raise taxes. Mmm, where have I heard about raising taxes before?

The Senate roll call for impeachment is not going well for Wintergreen. At least at the beginning of the vote, it looks like he is about to be tossed out of office. As the Senate vote gets really gloomy,  the First Lady Mary Turner bursts in. She announces that she’s expecting.

Since no expecting President has ever been impeached, the vote is called off. This proves the Gershwin brothers didn’t anticipate today’s Democrats. Adam Schiff wouldn’t let an expecting president off the hook. Nadler probably would be there. The play would probably have him going to McDonald’s for breakfast, where he would get stuck between the golden arches. Maybe they would have to lure him out with a bag of Oreos.

Of Thee, I Sing is an exceptional play because it connected with the mood of America during the first part of the depression. That mood is similar to today.  A feeling that a political elite is trying to run the country, that Congress is tied up in their own underwear over political things rather than getting anything done for the people, and a president can be impeached for something silly like corn muffins.  Over and above the great music, comedy, and biting satire, the play has a sense of optimism, a feeling that however bad things get, things eventually would turn out fine. That optimism is uniquely American.

Of Thee I Sing was revived a few times. A planned movie version starring the Marx Brothers never came together (thank God), and there was even a dreadful TV version starring Carroll O’ Connor (it was the musical comedy equivalent of the Star Wars Christmas Special). Still, the play was never revived at the right time–like now.

Of Thee I Sing is merciless in attacking all American institutions. The nine members of the Supreme Court care more about politics than justice (just like the Roberts Court). The Senators care more about their political party than doing their jobs (can you say, Chuck Schumer?). And the political establishment doesn’t give a rat’s ass about what the country needs or what the people want. They only care about public opinion and maintaining power. Because of that attitude, identity politics is more important than issues. Some things never change.

This classic of American theater works best when the country is facing political distress, when America looks for entertainment, poking fun at what they are going through while understanding that as bad as things get, in the end, everything will be just fine. A time like now.

Oh…and the play ends with the Supreme Court deciding the gender of the presidential babies.  They decided on twins, one boy, and one girl–because it was the politically expedient thing. Today, Chief Justice Roberts would be proud.

And what of beautiful southern belle Ms. Deveraux? Vice-President Throttlebottom reminds us that when the President cannot fulfill his duty, that obligation is taken over by the Vice-President. So Throttlebottom gets Deveraux. This is the only part of the play that could not happen today. Kamala Harris is too busy trying to fix the border crisis.

In the end, everyone is happy. The President has his Mary (and corn muffins). After all, as the song says, “Posterity is Just Around The Corner.”