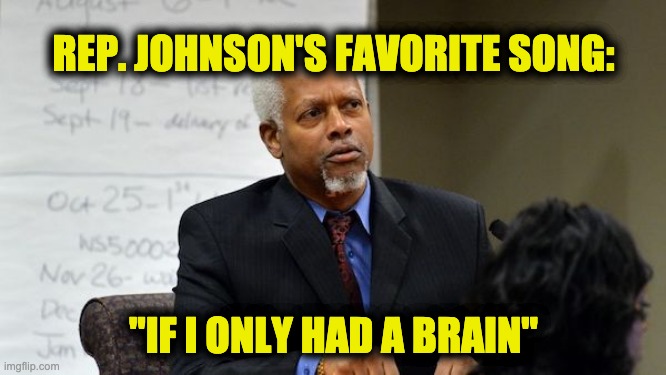 Sometimes it’s hard to criticize Hank Johnson (D-GA) because maybe he can’t help himself. The guy acts as if he is missing a key part of his body—a brain.  Hank Johnson spews

The latest example of his lack of mental capacity happened while appearing on MSNBC, the official network of insane liberal rage, hate, and stupid lying liberal propaganda, Johnson, the Georgia Democrat who once famously expressed concern Guam would tip over, wanted to impeach Trump because he was tall and called Jews termites long before Farrakhan did, told several lies as he worked to incite division, hatred, and violence.

During the interview, he told MSNBC, “these folks are trying to kill us right now as far as our right to vote. They’re trying to kill our democracy.” He urged people to “confront this evil that is right there in front of our face and is ready to choke us to death unless we can show that we’re not going to lay down and let it happen, we’re actually going to seize control. This is our country. We built this country.”

“Seize control?”  That sounds like a call for insurrection and rebellion to us.  Where’s the FBI on this?  Oh, wait, they’re too busy rounding up Trump supporters for the DOJ to abuse and torture…

“I remain hopeful that this administration, Joe Biden, President, will come to his senses, get away from the sentimentalism of the past of how the Senate used to work and how the members used to consort with each other and work things out over a drink and a cigar. Those days are long over. You know, these folks are trying to kill us right now as far as our right to vote. They’re trying to kill our democracy, and no amount of organizing can overcome the wrongfulness of suppressing votes in a democracy. We either have a democracy or we don’t, and if everyone can’t vote in this country, if some can’t vote because of their race, then this is not a true democracy. So, we’re actually in a fight, Tiffany, for democracy. It’s being attacked by those who would take away our vote and it’s wrong, and we can’t stand for it.”

“I don’t know if enough people understand the danger that we are in. Your last segment about abortion and how the only people who will, in a new medieval society that they seek to impose upon us, the only people who will be able to have freedom over their bodies are white women because they have money. Any time only people who are light-skinned, white, are able to vote in this country, I mean, these are — these subjects are the immediate threats to us, I mean, to everyone. And if everyone does not start feeling a sense of urgency about taking some action, and that’s why I’m so happy to be with LaTosha today. Because she’s a woman of action. She takes action. Yesterday, I was able to take some action to come out of my comfort zone, but it’s going to take more than Hank Johnson and LaTosha Brown and Joyce Beatty and others to come out of their comfort zones and to confront this evil that is right there in front of our face and is ready to choke us to death unless we can show that we’re not going to lay down and let it happen, we’re actually going to seize control. This is our country. We built this country. And so, nobody has a claim to it bigger and better than us. And so, it’s up to us now to save this country, if not just for ourselves, but for our fellow man.”

Here’s a video of his lies and calls for violence and insurrection:

Let’s get one thing straight.  No one — and I mean absolutely NO ONE — is trying to do what Johnson is falsely claiming.  Worse yet, he knows it, and so do the lying propagandists at MSNBC.  But neither he nor they care about the truth. The real question is, does he even understand the truth.

After all, he really did ask if too many marines on the island of Guam would make it tip over.

And he thought Trump should be impeached because he was too tall.

Johnson is an expert on hatred. He spews it well. In 2016 n the first day of the DNC, which ironically was held in Philadelphia, the city of Brotherly Love, the imbecilic Rep. Hank Johnson (D-GA), a Hillary Clinton super-delegate, took time away from his party’s nominating event to speak at an anti-Israel meeting sponsored by the U.S. Campaign to End the Israeli Occupation, an organization trying to unite the Boycott, Divestment, and Sanctions (BDS) movement, against Israel. According to the Washington Free Beacon, Johnson made some anti-Semitic remarks, “Rep. Hank Johnson, D- Ga., launched into a tirade against Israel and its policies toward the Palestinians, comparing Jewish people who live in disputed territories to “termites” that destroy homes.”

Termites? I guess that’s where Farrakhan got his idea from.

Did Rep Johnson really understand his statement about the GOP trying to kill our democracy? Considering his history, perhaps he doesn’t realize that he is an idiot.  It’s hard to criticize someone who acts as if he donated his brain to science and forgot to tell the scientists to wait until he died.