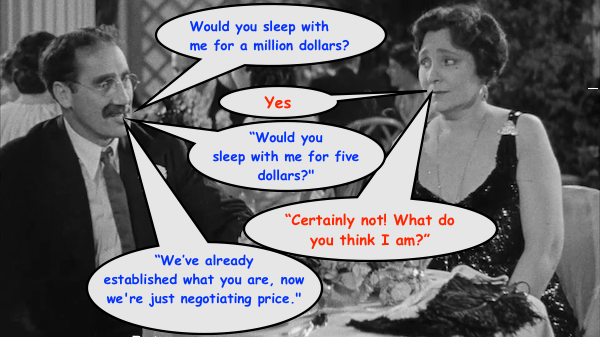 There’s an old Marx Brother’s routine where Groucho leans over to Margaret Dumont and says “Would you sleep with me for a million dollars?” Dumont hesitates and says “Yes.” Groucho lean over again to say “Would you sleep with me for five dollars?” “Certainly not!” Says Dumont, “What do you think I am?” Groucho takes the cigar out of his mouth and says, “We’ve already established what you are, now we’re just negotiating price.”

The House of Representatives health care bill reminds me of that Groucho bit, not for any of its provisions, because it established that it is now a federal government responsibility to run the healthcare system.

Eight years ago the fight was, should the government get involved with providing healthcare for the average American?  Not just safety-net programs like medicare or the pre-Obamacare Medicaid, but should the government get involved with supplying healthcare to most Americans. That’s what the anti-Obamacare town halls were all about.

The alarming part of this latest health care debate wasn’t about whether or not government should be involved in health insurance instead it was about how involved the government should be. It is as if the Republicans had the home-field advantage but decided to give it up and play on the Democrats home field.

For eight years I’ve been hearing repeal and replace. Silly me, I thought Obamacare was going to be replaced with a modified version of how things were before the Democrats put their grubby hands on 16% of the economy. Perhaps with adjustments like tort reform and being able to sell across state lines. You want kids to stay on their parents plans until 26? Sure..perhaps this group of heathy young’uns helps keep cost down.

I would have even been okay with doing pre-existing conditions the way they are done in NY. Once you have insurance even if you transfer from one provider to another (without a significant break) they can’t kick you off. Maybe there’s a way that parents can get coverage for a baby while mom is still pregnant incase the child is born with major medical problems. Or some other solution. I am not now or have ever been a policy wonk. But what I do know is that the framers wrote the constitution to make sure that the federal government stays out of our lives.

But here’s the bottom line.  If the instead of the version of  Obamacare that was forced down our throats eight years ago, the program that was passed was something similar to the GOP healthcare bill passed on Thursday,  the GOP would have raised holy hell .

This week’s vote exposed the real win by the liberals eight years ago and confirmed by the GOP in  bill passed Thursday –America has gotten comfortable with the feds being involved in our health care. Worse than that, with Thursday’s vote the GOP not only recognized that socialized health care is now accepted,  but they gave it their blessing.

Unlike eight years ago, this time it was the GOP who had the upper hand in negotiations, some day when the political winds put the Democrats are in charge, that progressive president can take the version of government involved healthcare passed on Thursday and change it to a single-payer system. Groucho might say “we already established that government does healthcare…now we’re just negotiating how much.”

Sadly the only way to have avoided that ominous single-payer healthcare was to proceed with the promised repeal, totally eliminate Obamacare and start from ground zero to develop a plan that lived in the private rather than public sector.