Goodbye Middle Class: Fifty Percent Of All US Workers Made $34,612.04 Or Less Last Year 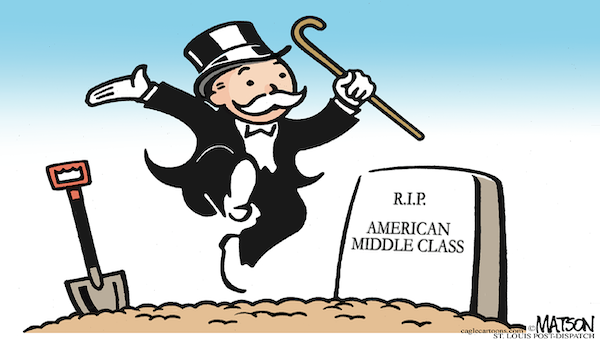 If we keep going down this path soon, we won’t have much of a “middle class” at all.  When I first started writing about the economy many years ago, I often wrote about the tens of millions of “working poor” Americans were enduring so many hardships.  But at this point, most of the nation now falls into the “working poor” category.  That isn’t because wages haven’t been going up.  Little by little, wages have been incrementally rising year after year, but meanwhile, the cost of living has been absolutely soaring.  Paychecks have not even come close to keeping up with inflation, which has been eviscerating the middle class.  Today, most of the country is in constant “survival mode” financially, which isn’t going to change any time soon.

When I was growing up, retailers that catered to the middle class did exceptionally well.  My mother was constantly taking my siblings and me to JCPenney and Sears, and it seemed like that was where virtually everyone shopped.

And that is because there isn’t much in between those two extremes anymore.

The Social Security Administration has just released final wage statistics for 2020, and they are extremely alarming.  According to the figures they have given us, the median wage for 2020 was just $34,612.04…

By definition, 50 percent of wage earners had net compensation less than or equal to the median wage, which is estimated to be $34,612.04 for 2020.

Needless to say, trying to survive in a major U.S. city on that kind of income is not easy in today’s economic environment.

Of course, $34,612.04 would have been a very nice yearly income back in 1960 because back then the cost of living was much lower.  The following comes from an article authored by MN Gordon…

Today that would barely be a down payment on a dilapidated shack in many parts of the country.

I have frequently pointed out that millions of jobs are available in the U.S. right now in recent weeks.

But the vast majority of them are highly undesirable because they pay “working poor” wages.

So many people are working as hard as they can, and they still can’t make ends meet.  In fact, one recent poll discovered that 59 percent of Americans that make less than $50,000 a year have experienced “serious financial problems in the past few months”…

As I have discussed so many times over the years, we have gotten to a point where most of the population is living paycheck to paycheck.

And when you are living paycheck to paycheck, all it takes is one lousy break to push you into financial distress.

Sadly, things will get even worse for ordinary Americans in the coming months because inflation continues to rise very aggressively…

Inflation accelerated in September, with consumer price pressures across America showing no sign of easing ahead of the all-important holiday shopping season.

Consumer prices increased 5.4% from the year-ago period, slightly faster than their 5.3% increase the previous month and on par with the increases in June and July.

In other words, the sort of inflation that we faced during the Jimmy Carter era is already here.

And CNN just admitted that prices “aren’t coming back to earth anytime soon.”

Sadly, politicians seem determined to hasten the demise of the middle class by pushing millions more Americans out of decent-paying jobs in the months ahead.  But in the process, they will also be creating critical staff shortages.  For example, just consider what just happened at a hospital in Lewiston, Maine…

The administrators of Central Maine Healthcare in Lewiston, Maine, enacted a vax policy demanding all employees to take the vaccine. But more than 250 employees refused to comply before the deadline. These employees were subsequently fired.

Unfortunately for patients, about 170 of those employees were needed to staff the intensive care unit. Consequently, the hospital had to shut down its ICU because of the firings.

Because it lost so many employees, the hospital plans on cutting intensive care beds by 50% and reducing the number of medical surgical beds by 40%, the Bangor Daily News reported.

Of course, the same type of scenario is playing out at hospital after hospital all over the country right now.

And you can’t just hire random people off the streets to be doctors and nurses because it takes many years of training to become a doctor or a nurse.

So let us hope that we don’t have to deal with a significant health crisis this winter because our medical system would rapidly become overwhelmed.

There will be more inflation, more shortages, and more questionable decisions by our leaders in the months ahead.

Events are genuinely beginning to spiral out of control, and America will never be quite the same ever again.

Needless to say, those numbers actually significantly understate what we are facing because the way inflation is calculated by the government has changed dozens of times over the years.

As I am constantly reminding my readers, if inflation was still calculated the way it was back in 1980, it would already be well into double-digit territory.