At Least He Kept His Shirt On 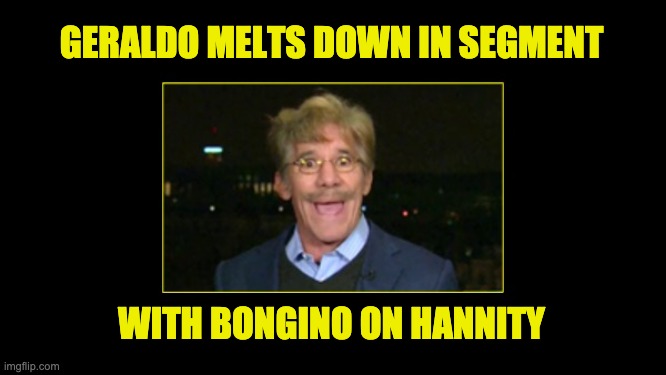 “You’re a punk, Bongino. You’re a punk!” Early on, it was pretty clear that this Hannity segment on policing between Dan Bongino and Geraldo Rivera was going to go sideways in a hurry. Geraldo was still nursing a grudge from the spanking he got on Monday. (The picture above is not from the Hannity segment) And when Sean Hannity had the two back on Wednesday, the argument continued–only much nastier (see video below).  Geraldo nuclear meltdown

The issue to be discussed was Daunte Wright, whose tragic shooting Geraldo claimed was racist (like everything else). According to Geraldo, the self-described great reporter, he is an expert in policing:

“I have been covering cops for over 50 years. I am perhaps the most deeply experienced reporter in television history…I have done hundreds of stories over thousands of hours with cops. Everything from shoot-outs to executing arrest warrants, to roadblocks to drug raids. You name it, I’ve been there. I’ve been to too many cop funerals to even think about. They are horrible!”

To be fair, Geraldo Rivera (Born Gerald Riviera from Babylon Long Island) is an adept reporter, depending on how one defines adept remember. He’s broken some big stories. Remember the story of the bottle found in Al Capone’s vault or his previewing American troops’ position and movements as an embedded reporter during the first Iraq war? And his commentary has been on the same level as his reporting, like how he explained how Al Sharpton was like Martin Luther King Jr., or that Trayvon Martin would not have been shot if he wasn’t wearing a hoodie?

Turning to the tragic death of Daunte Wright,  Geraldo said former Officer Kim Potter exhibited “reckless or grossly negligent behavior” in the shooting and that tasers should be “the first weapon of choice for a cop” and be worn on the side of their dominant hand. An officer’s gun should be on the side of their weaker hand.

Hannity asked Bongino, former NYPD Cop and Secret Service agent, to respond. He shook his head and responded, “I don’t even know how to respond to that. Give me a second to digest the stupidity of that.”

That’s when the reporter who tweeted a topless picture of himself in 2013 started going bananas.  As Bongino answered, Geraldo, started screaming. “How about responding with facts?’ And, ‘You’re nothing but a name-caller! You’re a cheap-shot artist!’

Instead of letting Bongino speak, Geraldo started screaming about racial issues and continued his flip out.

Geraldo screamed. “Blacks are twice as likely to be shot by cops as whites,”

Bongino responded, “You’ve never worn a badge, period. Not interested in your reporting on it because reporters deal with facts, and you brought the race card into it the other night when we had this debate, despite having no facts to back that up,”  “I know more than you! What do you know?” Rivera yelled as he continued to melt, “What, did you have a ten-minute career as a cop? You’ve been running for office for the last 20 years.” Bongino threw back, “Take a Valium. You’ve really gotta pipe down. My gosh, you’re a 70-year-old man!”

Near the end of the argument, it seemed as if it was trending toward a fist fight.

Bongino: That’s all you’ve got. You’ve got nothing else, buddy.

Bongino: You’re making a race war out of it.

Geraldo: You punk! You’re nothing but a punk.

Bongino: You wouldn’t tell me that to my face.

As Hannity tried to close the segment. Geraldo shot back:

Rivera is clearly losing it (as if he ever had it). He never backed his opinions up with real facts, but now he gets much angrier proving his points. Bongino may be correct when he told Geraldo to take a Valium.

On the bright side, Geraldo did keep his shirt on during the entire segment.

Other Geraldo ‘gems” include: