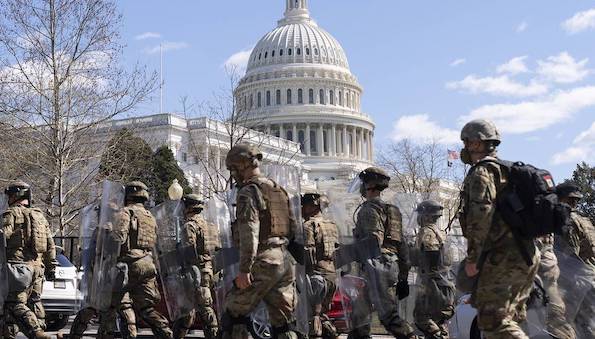 Politico reports that  Col. Earl Matthews, who on January 6 was serving as the top attorney to Maj. Gen. William Walker, then commanding general of the D.C. National Guard. The Colonel wrote a detailed 36-page letter to the House saying that General Charles Flynn and Lt. General Walter Piatt lied to Congress about the delay of the national guard showing up to help out in the Capitol riot. Matthews also slammed “Pentagon’s inspector general for what he calls an error-riddled report that protects a top Army official who argued against sending the National Guard to the Capitol on January 6, delaying the insurrection response for hours.”

Col. Matthews claims that General Walker wanted to send the National Guard as soon as he was asked, but Generals Flynn and Platt delayed the response. And they were “absolute and unmitigated liars” for their characterization of the events of that day.

On the other hand, Matthews backed up the testimony of General Walker:

“Every leader in the D.C. Guard wanted to respond and knew they could respond to the riot at the seat of government” before they were given clearance to do so on Jan. 6, Matthews’ memo reads. Instead, he said, D.C. guard officials “set [sic] stunned watching in the Armory” during the first hours of the attack on Congress during its certification of the 2020 election results.

Matthews’ memo levels major accusations: that Flynn and Piatt lied to Congressabout their response to pleas for the D.C. Guard to quickly be deployed on Jan. 6; that the Pentagon inspector general’s November report on Army leadership’s response to the attack was “replete with factual inaccuracies”;and that the Army has created its own closely held revisionist document about the Capitol riot that’s “worthy of the best Stalinist or North Korea propagandist.”

General Walker had already asked the Inspector General to withdraw his report. As reported in the Washington Post on November 18:

William J. Walker, now retired from the military and serving at the Capitol as House sergeant-at-arms, said in an interview that he never received a call from Army Secretary Ryan McCarthy at 4:35 p.m., as alleged in a report by the Defense Department’s acting inspector general, Sean O’Donnell. Walker, repeating comments he made during sworn Senate testimony in March, said that he received authorization to deploy troops at 5:08 p.m. and immediately dispatched those forces, already loaded onto several buses to depart the D.C. Armory.

“Every minute mattered. You have to understand: These are my friends here,” Walker said, referring to his close relationship with former Capitol Police chief Steven Sund, who was forced to resign following the attack, and other law enforcement officials. He called the report “incomplete,” “inaccurate” and “sloppy work.”

According to Matthews’ during a  2:30 pm. conference call with senior military and law enforcement officials, plus General Walker and himself during the capitol riot “then Capitol Police Chief Steven Sund ‘pleaded” for the immediate deployment of the National Guard to the Capitol,  Matthews said, Flynn and Piatt, both opposed the move (The two men were the highest-ranking Army officials who on the 2:30 call).

“LTG Piatt stated that it would not be his best military advice to recommend to the Secretary of the Army that the D.C. National Guard be allowed to deploy to the Capitol at that time,” Matthews wrote, adding: “LTGs Piatt and Flynn stated that the optics of having uniformed military personnel deployed to the U.S. Capitol would not be good.”

Piatt and Flynn suggested instead that Guardsmen take over D.C. police officers’ traffic duties so those officers could head to the Capitol, Matthews continues.

(…)Both men, however, later denied to Congress that they had said the Guard shouldn’t deploy to the Capitol.

Flynn told Maloney that he “never expressed a concern about the visuals, image, or public perception of” sending Guardsmen to the Capitol

According to Col. Matthews, both Generals lied to Chairman Maloney.

According to Col. Matthews on General Walker, The National Guard was ready to go to Capitol at 2:30 pm but were prevented by Platt and Flynn, who were worried about how it would look. The guard finally got clearance three hours later. Per Matthews’ report, the two generals realized they screwed up and covered it up by lying to Congress land the I.G.

Below is Col. Matthews’s full document— give it a read and tell us what you think.

Matthews by Jeff Dunetz on Scribd