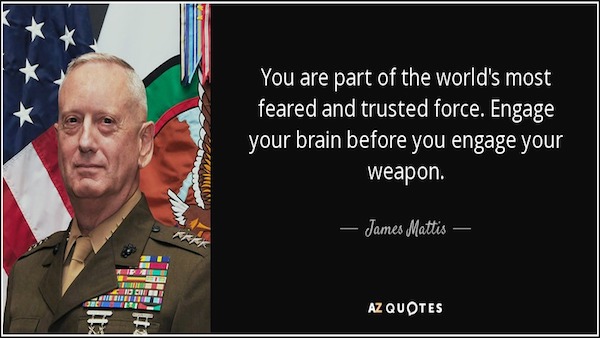 Yesterday President Trump was roundly criticized by Democrats and media liberals for his statement about the North Korean nuclear threat “North Korea best not make any more threats to the United States. They will be met with fire and the fury like the world has never seen.” Today that criticism was answered not by North Korea, but by U.S. Secretary of Defense, and retired Marine General James Mattis. General Mattis answered the criticism with a statement of his own that was just as tough as that of the president’s (if not stronger). And while the President’s critics worried that he was a novice in the world and military stage, that same thing could not be said of the General who spent 44 years in the Marines, many of which were on the international stage.

But of course, because Mattis is the man who once said  “I’m going to plead with you, do not cross us. Because if you do, the survivors will write about what we do here for 10,000 years,” or “Find the enemy that wants to end this experiment (in American democracy) and kill every one of them until they’re so sick of the killing that they leave us and our freedoms intact,” or my personal favorite, “I come in peace. I didn’t bring artillery. But I’m pleading with you, with tears in my eyes: If you f**k with me, I’ll kill you all,”

Okay my real favorite is: 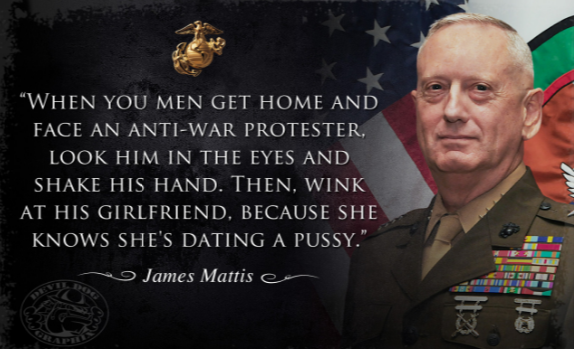 General Mattis is not a frothing from the mouth warmonger. He is a leader who wants to avoid violence at all costs, but if he has to go to war he doesn’t want to do it in a tepid way which leads to American deaths.

Below is the statement released by General Mattis,  The money line was, “The DPRK should cease any consideration of actions that would lead to the end of its regime and the destruction of its people.” And this man means it.:

The United States and our allies have the demonstrated capabilities and unquestionable commitment to defend ourselves from an attack. Kim Jong Un should take heed of the United Nations Security Council’s unified voice, and statements from governments the world over, who agree the DPRK poses a threat to global security and stability.  The DPRK must choose to stop isolating itself and stand down its pursuit of nuclear weapons.  The DPRK should cease any consideration of actions that would lead to the end of its regime and the destruction of its people.

President Trump was informed of the growing threat last December and on taking office his first orders to me emphasized the readiness of our ballistic missile defense and nuclear deterrent forces. While our State Department is making every effort to resolve this global threat through diplomatic means, it must be noted that the combined allied militaries now possess the most precise, rehearsed and robust defensive and offensive capabilities on Earth.  The DPRK regime’s actions will continue to be grossly overmatched by ours and would lose any arms race or conflict it initiates.