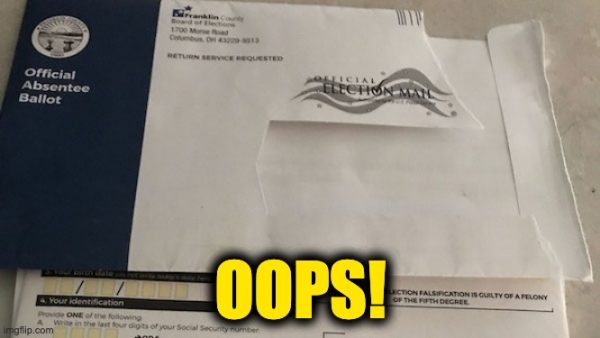 Democrats and their media co-conspirators have been pushing the line that Republicans are opposed to mail-in ballots for nefarious reasons… despite all evidence to the contrary, new evidence is discovered every day. On Friday, the Franklin County, Ohio, Board of Elections announced that 49,669 voters throughout the county received an incorrect absentee ballot this week. That represents almost 21% of the ballots mailed out to voters. Franklin County incorrect ballots

A release from the Board of Elections explained.

Those ballots were part of 237,498 mailed through the United States Postal Service. The Board’s primary goal is to have all 49,669 impacted voters cast their correct ballot. The board has already begun the process to print, stuff, and mail the 49,669 replacement ballots and expect them to be sent to the United States Postal Service within 72 hours for delivery. Additionally, while the replacement ballots are processed, the board will mail informational postcards to all impacted voters that detail the situation and highlight the voter’s multiple voting options moving forward. We want to make it clear that every voter who received an inaccurate ballot will receive a corrected ballot. Stringent tracking measures are in place to guarantee that a voter can only cast one vote.

When Franklin voters started receiving their ballots, some reported that their envelopes and ballots contained the wrong information, such as an incorrect precinct or congressional race.

Will they screen Democrats too. After all it’s a heavily Democratic county. In 2016, Hillary Clinton received 60.6% of votes.

According to the board of elections, they will ensure people will vote only once via this process:

Election officials blame a malfunction with one of the high-speed scanners used to process the ballots.

“On October 3 at 2:24 p.m., a function of one of those scanners was disabled,” election board director Ed Leonard said Thursday. “This was determined to be the root cause of the system error that led to voters receiving an incorrect ballot.”

The board says the scanner is now working as it should and launched an investigation into BlueCrest, the vendor for the scanners. Officials say they do not believe the mistake was nefarious, and law enforcement is not involved at this time.

If this could happen with absentee ballots, imagine what would happen when states do a mass mailing of unsolicited ballots. It’s hard to understand how something like this could happen. After all, the Democrats and their sycophants in the mainstream media say whether intentional or not, there is no way mail-in ballot screw-ups will happen. I guess they are wrong—again.