Even W/Line-Up Changes Fox News Growing, But CNN And MSNBC Growing MUCH Faster 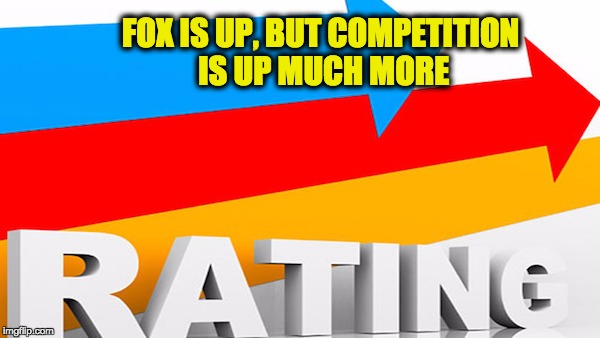 Good news/bad news for the Rupert Murdoch and Fox News. In the past year half of its eight hour primetime line up(4PM-12A)  left the network (Greta,O’Reilly 2x, Kelly) replaced by Tucker Carlson, Martha MacCallum and at the beginning of May, The Five got switched from 5PM to 8PM, and The Specialists replaced The Five at 5PM. The good news is the network continues to grow in Adults 25-54 a key news demographic, when compared from this May to May 2016, and May 2015 and FNC is still the number one cable news network. The bad news is that CNN and especially MSNBC have grown much faster than Fox, and their lead is shrinking.

MSNBC has also made Prime Time changes, Nicole Wallace replaced Al Sharpton’s low rated program, Greta came from Fox and replaced With All Due Respect, and the 11PM Chris Hayes has been moved in favor of Brian Williams.

A note on methodology.  When making the comparison it is important to compare the same time of the year as the base (2017) year. There is a regular pattern of total TV viewing, for example, November PUTS (persons using Television) are the highest of the year, PUTS are lowest in July. Same thing with days of the week, Saturday Prime Time has has the lowest viewership, Sunday the highest. So it is important to use the same day of the week.

All the audience sizes are taken from the TV Newser Scoreboards. Since we begin with the latest available 5/11/17, it is important to use the same time period all three years. 2017 and 2016 use the first two weeks of May. The second week of 2015 wasn’t cover by Scoreboard, so the first and third weeks were used.

For comparison’s sake the two weeks were averaged, just in case there was a major news story in one of the two weeks. 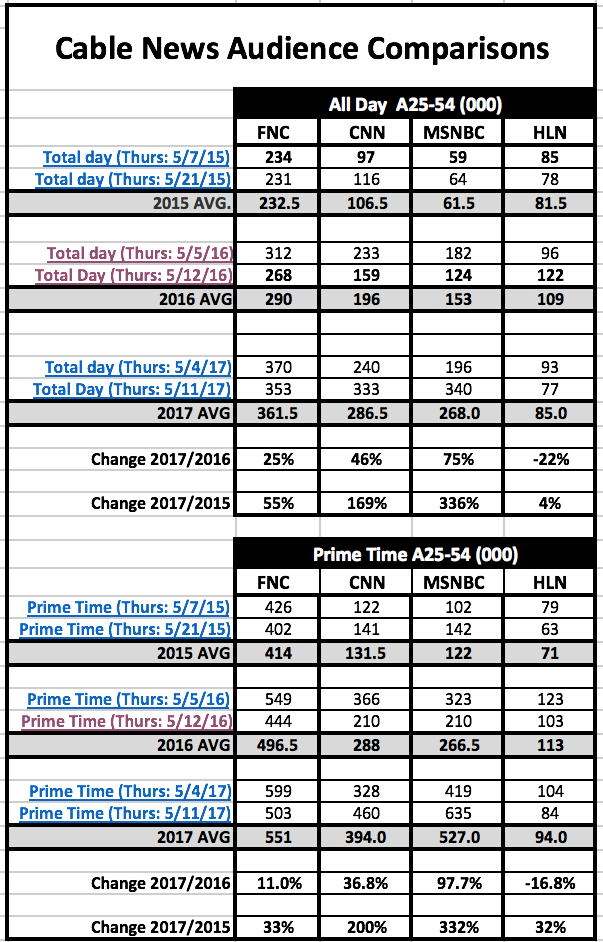 Another way to look at it is, in May 2015 the FNC Audience was 54% more than CNN and 74% more than MSNBC. In 2017 the advantage over CNN shrunk to 28% and the advantage over MSNBC dropped to 4%. Is FNC in trouble?  Well maybe. MSNBC’s growth will probably begin to slow down because the line-up changes have settled in.  But Fox’s new line up is brand new, the audience needs to show growth as the new shows settle in. Tucker Carlson in O’ Reilly’s old spot has created tons of buzz, the Specialists and MacCallum are relatively new. But there are rumors that Rupert’s sons, James and Lachlan Murdoch are trying to move the network more towards their liberal politics, and the creation of a brand new conservative skewing network. If any (or all) that happens and the new Primetime lineup doesn’t catch on… Fox may see itself go from 1st to 2nd or even 3rd a year from now.