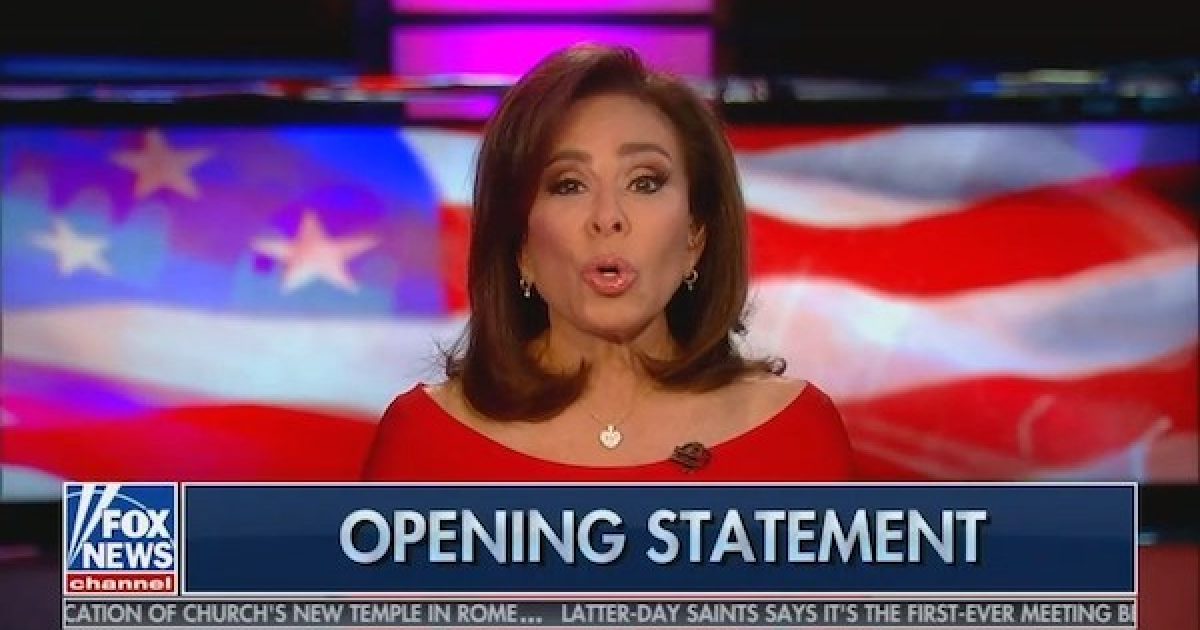 On Saturday, word got out that Fox News decided to scrub a scheduled airing of Judge Jeanine Pirro’s program, choosing instead to show a repeat episode of its documentary series “Scandalous.”

The announcement came days after the network condemned comments Pirro made about Rep. Ilhan Omar, the anti-Semitic Democrat from Minnesota, and one day after a horrific mass shooting in New Zealand.

During her broadcast last Saturday, Pirro, a former New York prosecutor, suggested Omar, a Democractic representative, did not respect the law set down by the Constitution of the United States. “Is her adherence to this Islamic doctrine indicative of her adherence to Sharia law, which is antithetical to the U.S. Constitution?” Pirro asked.

The change in Fox News’s schedule was evident in an on-screen cable guide. But a Pirro broadcast had been placed in newspaper TV listings for this evening.

When reached for comment, a Fox News spokesperson said, “We’re not commenting on internal scheduling matters” and declined to elaborate.

Naturally, news of the change didn’t sit too well with quite a few of Judge Jeanine’s fans on social media.

@FoxNews
Soooo…. judge Jeanine’s gets suspended tonight because she spoke ‘truth to power’. Yet Christians and patriots are Vilified EVERY DAY by MSM hosts & nothing happens?? This is how Islamism takes a foodhold & our 1A rights eroded. Protest to @FoxNews Call them out.

Expressing my protest for the cancellation of Judge Jeanine tonight

@JudgeJeanine @FoxNews
I won't be watching tonight …. IN SUPPORT of Judge Jeanine and as protest against her suspension for ASKING A VALID QUESTION ON AIR.#ReinstateJudgeJeanine#FoxFakeNews#FoxWeaselsExecs #DisappointedInFox

@JudgeJeanine ????????????????????
What happen to the show Judge.
I was looking forward to your show tonight ???? I was hoping to hear about The Clintons. Please tell me you will be on next week. Miss you Judge Jeanine

We stand with @JudgeJeanine !! @FoxNews do not give in to leftists’ hate https://t.co/mss4qRmnjt

All I will say is… BIG mistake to cross #JudgeJeanine
A LOT of good people have her back! pic.twitter.com/oI5NxoqlJP

@FoxNews What's wrong with you for not aring Judge Jeanine Pirro's show todnight! I'm not watching what you are airing! I thought you were a voice for those who have courage to speak against the tide but I guess I'm wrong! Shame on you!

You can take Judge Jeanine off if you want but your ratings will drop!!!! The Republicans respect and love Jeanine and we will boycott you!!! @FoxNews

Expressions of support for Pirro was also seen on Facebook: 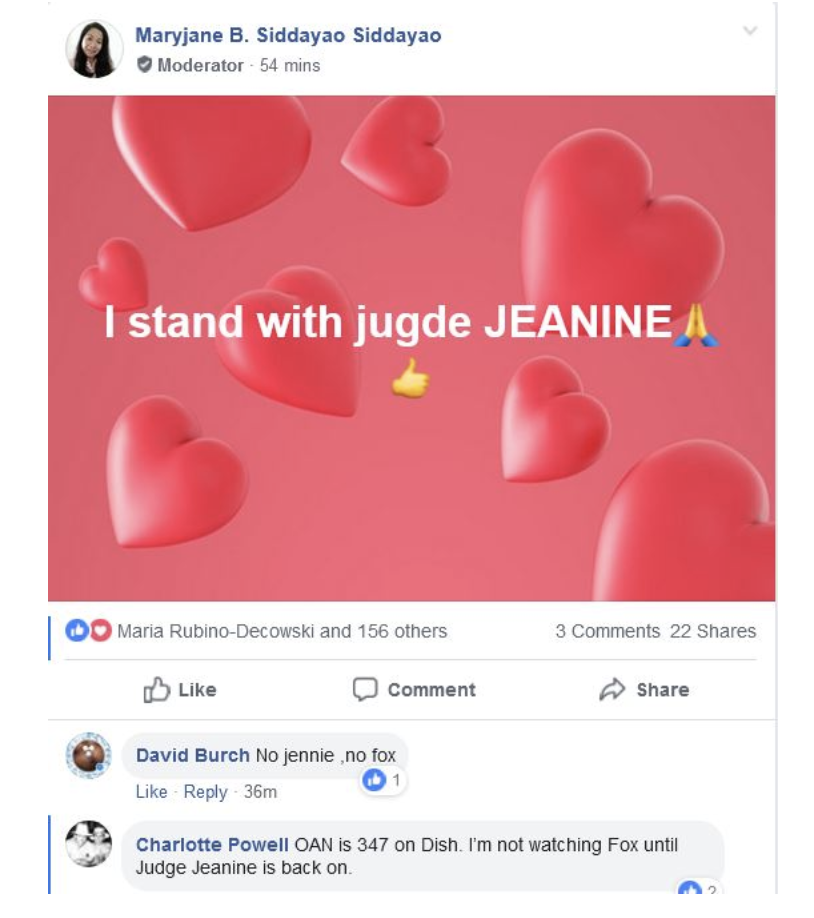 According to Variety, Pirro responded to the reaction sparked by her comments:

“I’ve seen a lot of comments about my opening statement from Saturday night’s show and I did not call Rep. Omar un-American,” she said. “My intention was to ask a question and start a debate, but of course because one is Muslim does not mean you don’t support the Constitution. I invite Rep. Omar to come on my show any time to discuss all of the important issues facing America today.”

Bring back @JudgeJeanine Pirro. The Radical Left Democrats, working closely with their beloved partner, the Fake News Media, is using every trick in the book to SILENCE a majority of our Country. They have all out campaigns against @FoxNews hosts who are doing too well. Fox …..

….must stay strong and fight back with vigor. Stop working soooo hard on being politically correct, which will only bring you down, and continue to fight for our Country. The losers all want what you have, don’t give it to them. Be strong & prosper, be weak & die! Stay true….

….to the people that got you there. Keep fighting for Tucker, and fight hard for @JudgeJeanine. Your competitors are jealous – they all want what you’ve got – NUMBER ONE. Don’t hand it to them on a silver platter. They can’t beat you, you can only beat yourselves!

Tucker Carlson also has been the subject of criticism for misogynistic and racist comments he made on a radio show a decade ago that was recently uncovered by liberal hit team Media Matters. Strangely the same people making hay out of Tucker’s old comments ignore Media Matters’ Antisemitic statements including accusing Jews of dual loyalty.

What do YOU think? Let us know in the comments below.