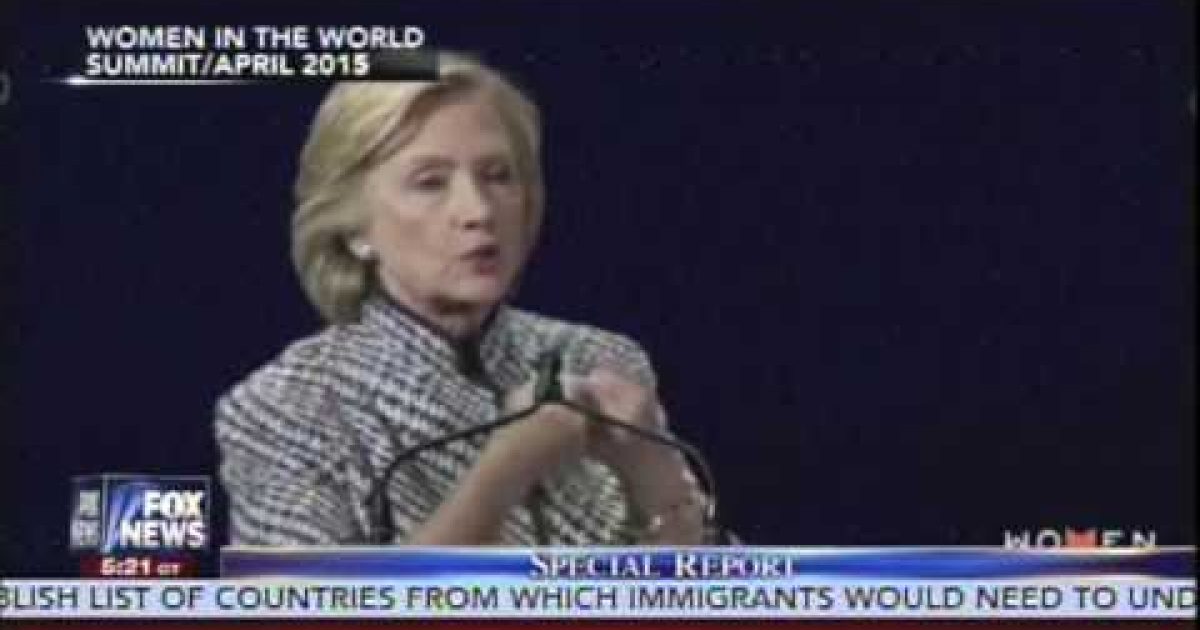 Since we’re dedicated to vetting Democratic Party nominee Hillary Clinton, perhaps the most evil person ever nominated by a major party for the highest office in the land — something, by the way, the so-called “mainstream media” won’t do — we thought it important to remind you of something she said at the 2015 Women in the World Summit.  There, she informed Americans that they must change their religious beliefs to suit her, especially on issues like abortion.

“Far too many women are denied access to reproductive health care and safe childbirth, and laws don’t count for much if they’re not enforced. Rights have to exist in practice — not just on paper,” she told those in attendance. “Laws have to be backed up with resources and political will…And deep-seated cultural codes, religious beliefs and structural biases have to be changed.”

She also said that “religious beliefs” stand in the way of the radical LGBT agenda. Here’s video of that 2011 statement, courtesy of CNS News: I first wrote about this at Spokane Faith and Values in May 2015, and I believe it bears examination again, especially considering some of her more recent statements:

Her comment sparked a flurry of criticism. Writing at The Blaze, Susan Calloway Knowles, a licensed psychotherapist and former practicing family law attorney, said Clinton was clearly taking aim at Christians in America who do not agree with her views on abortion.

“It was perhaps Clinton’s attempt to hammer the final nail into America’s proverbial coffin by lessening Christians’ religious, cultural, and familial beliefs,” she wrote. “If achieved, the result will be that God, the Bible and the U.S. Constitution which was founded upon Christian principles, will take a back seat to other progressive agendas, at least in a Clinton presidency. “

Kirsten Powers, a left-of-center columnist who sometimes appears on Fox News, also took Clinton to the woodshed in a recent USA Today op-ed entitled: “Saint Hillary seeks to save Christians from Christianity.”

“If Clinton is going to complain about cultural codes, perhaps she should dispense with the ‘reproductive health care’ euphemism and just say ‘abortion’ and ‘contraception,’” she said. “Then she should explain why she thinks she, or anyone else, has the right to dictate what religious people believe about either issue.”

Powers hit the nail square on the head. Aside from displaying a stunning bit of hubris, Clinton revealed her true desire – to dictate every aspect of the lives of average Americans, including their religious beliefs.

Shortly before this unbelievable comment, Clinton spoke of “adult” camps — places where people can go for “fun.”

In a paid speech before the New Jersey chapter of the American Camp Association, former Secretary of State Hillary Cinton (sic) told the audience that America really needed to implement camps that adults could attend.

As I have gotten older, I have decided we really need camps for adults,” she said to laughter. “And we need the kind of camps you all run.”

“None of the serious stuff, not of the life-challenging stuff; more fun!” Clinton continued. “I think we have a huge fun deficit in America. And we need to figure it out how to fill that fun deficit, certainly for our kids, but also for the rest.”

Move over God, Hillary is coming to change our beliefs

Hillary Clinton has given us a look at some of the… http://t.co/VRjJbVEyDa

Of course the media will never remind you of this. But we will…