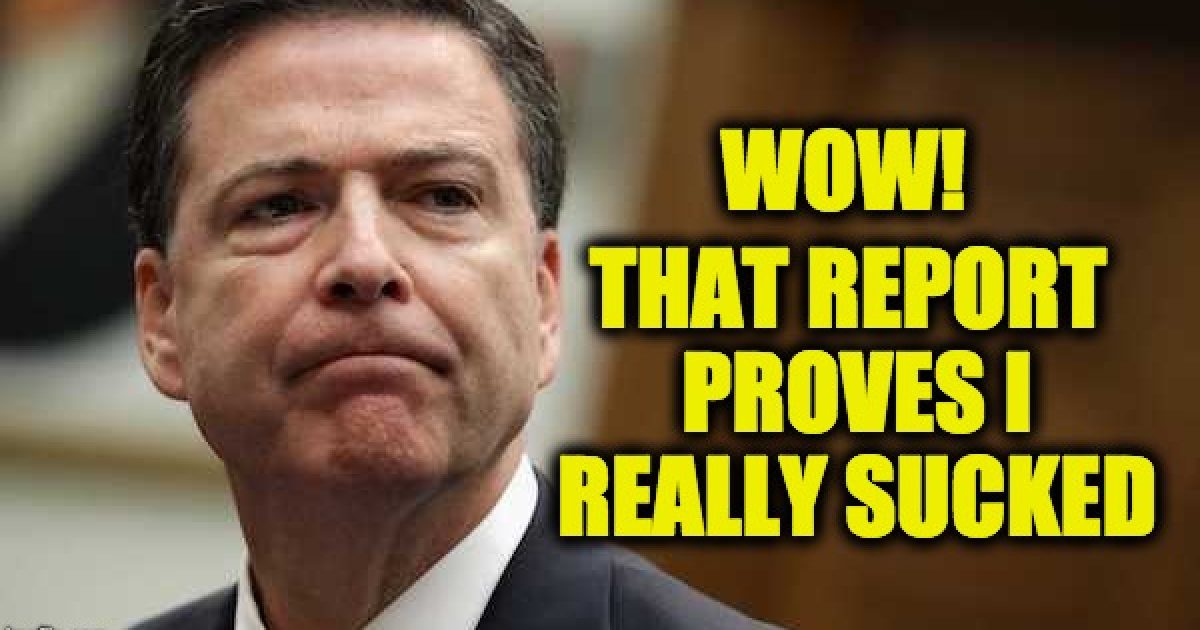 Some parts of the Inspector General’s (IG)report regarding the FBI’s handling of the Hillary Clinton investigation were incredibly ironic. In this IG report, we learned of Peter Strzok who promised his married girlfriend that he would stop Donald Trump from being elected because he personally didn’t like him. The report doesn’t explain how this senior member of the FBI intended to stop him or if he implemented his plan.

There were many ironies built into the IG report. While the Democrats and mainstream media (I guess those terms are redundant) focused on the parts of the report were most damaging to Trump, and Republicans concentrated the parts of the document they felt cleared the president or showed the Russia investigation to be biased. To be honest, the IG tome didn’t prove either side’s position.  After reading the almost 600-page report what did stand out, at least to this writer, was the parts of the study which proved the actions of former FBI Director Comey as well as the FBI “lovers,” Peter Strzok and Lisa Page were incredibly ironic.

Here are the five biggest ironies in the report each significant fact or quote includes the page number of the IG’s document where it is found in the paper, just in case you have the home version of the IG report:

2) Former FBI Director Comey was one of the few people in the entire world who didn’t know that Huma Abedin was married to Anthony Weiner. The man in charge of the best crime-fighting agency in the world didn’t know that Hillary Clinton’s chief of staff was married to a congressman who had to resign who became a mayoral candidate who had to quit. Both times because he was caught sexting.  It was a considerable scandal—in all the papers, TV news, etc.

“We asked Comey to explain why this initial information about the Weiner laptop did not “index” with him given that Abedin was closely connected to Clinton (…) Comey stated, “I don’t know that I knew that [Weiner] was married to Huma Abedin at the time.” (pg. 281)

This claim makes the former FBI director look worse than clueless. If there is a real version of the Andy Griffith show’s Deputy Sheriff Barney Fife somewhere in the remotest part of the United States, I guarantee you he knew that Huma Abedin was married to Anthony Weiner, but James Comey didn’t.

3) For those who believe that the reopening of the Hillary Clinton Email investigation two weeks before the election helped Trump win don’t blame it on Comey. Instead, blame it on Peter Strzok and Lisa Page the ultimate Trump haters.

Strzok, who was a leader of both the Hillary email and Trump Russia investigations, was told at the end of September (along with other top FBI managers) that an inquiry in NY found new Hillary State Department emails on Weiner’s laptop (pg. 330). But the email investigation wasn’t reopened until three weeks later— two weeks before the election.

“Under these circumstances, we did not have confidence that Strzok’s decision to prioritize the Russia investigation over following up on the Midyear-related investigative lead discovered on the Weiner laptop was free from bias [the code name for the Hillary email investigation was the Midyear investigation] (pg. 329).

Strzok’s plan to slow-walk the Hillary email investigation would have worked if Comey hadn’t changed his mind and decided he had to inform Congress and get a search warrant for the computer. The change in tactics:

“resulted not from the discovery of dramatic new information about the Weiner laptop, but rather as a result of inquiries from the Weiner case agent and prosecutors from the U.S. Attorney’s Office for SDNY on October 21 (pg.330).” [SDNY stands for Southern District of NY, a federal prosecutor]

That spurred Comey to act as he wanted to protect his reputation and keep his job when Hillary Clinton became president. According to the IG, his concern was:

“that failing to send the letter would harm the FBI and his ability to lead it, and his view that candidate Clinton was going to win the presidency and that she would be perceived to be an illegitimate president if the public first learned of the information after the election (pg. 371).”

Why is this ironic? For those who believe the revelation of the investigation of Hillary’s emails on Weiner’s laptop cost her the election (I don’t, but many Democrats do) than it was Strzok’s delay that did her in.  If the investigation became public near the end of Sept., Clinton would have had five weeks to fight the charge, or at least change the subject in the voter’s minds. With the revelation occurring two weeks prior the election it was a much harder task. In other words, the person revealed to be the biggest Trump hater in the FBI may have also made him president.

4) According to the IG, the FBI, supposedly the best law enforcement agency in the world may have taken bribes from the press in exchange for leaking information about the Hillary Clinton investigation.

“We identified numerous FBI employees, at all levels of the organization and with no official reason to be in contact with the media, who were nevertheless in frequent contact with reporters. Attached to this report (…) We have profound concerns about the volume and extent of unauthorized media contacts by FBI personnel that we have uncovered during our review. In addition, we identified instances where FBI employees improperly received benefits from reporters, including tickets to sporting events, golfing outings, drinks, and meals, and admittance to nonpublic social events (pg. xii).”

5) Strzok, the first FBI investigator of the Russia/Trump connections, and hater of President Trump believed there was nothing to the Russia collusion charges:

“Mueller was appointed Special Counsel on May 17, 2017. The next day Strzok and Page exchanged text messages in a discussion of whether Strzok should join the Special Counsel’s investigation (…) I hesitate in part because of my gut sense and concern there’s no big there, there. (pg. 406).”

Beyond the ironies, nothing was proven in this particular IG report. But the fun isn’t over. The IG is working on another investigation, this one is about how and why the Russia Investigation began. Perhaps that one will present answers instead of ironies.