The First Amendment Protects The Right To Offend 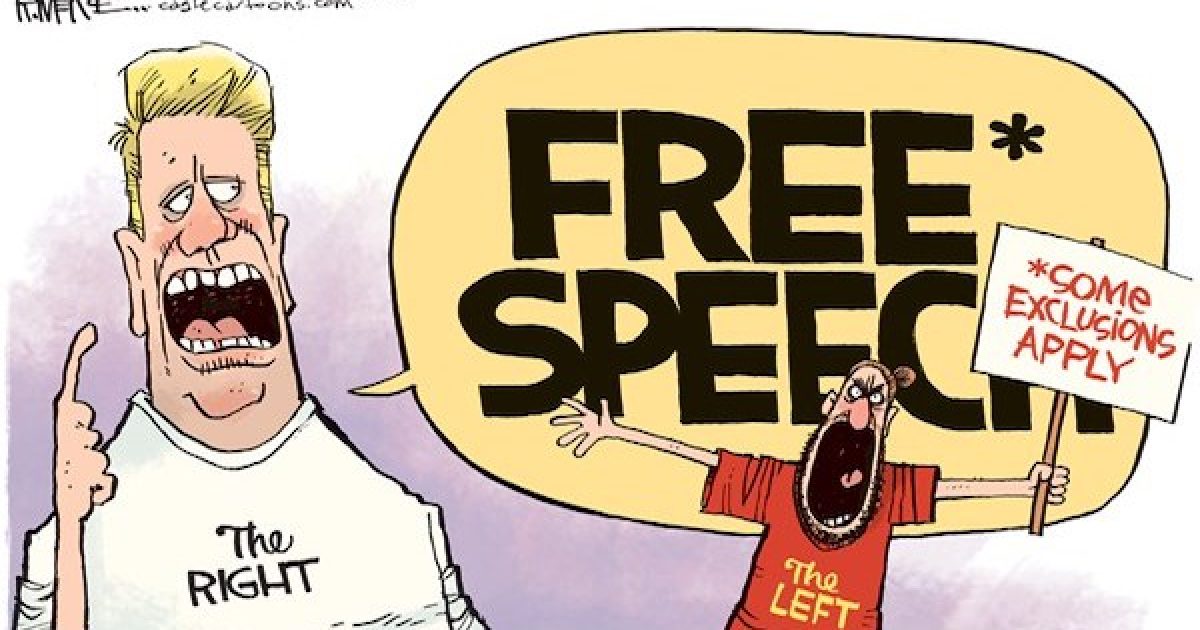 Our colleges and universities have fallen victim to this new “right.” The feelings of students often constitute sufficient justification for campus censorship. If a conservative speaker offends some of the students, that speaker can be denied a platform. “The belief that free speech rights don’t include the right to speak offensively is now firmly entrenched on campuses and enforced by repressive speech or harassment codes,” wrote attorney Wendy Kaminer in The Atlantic.

The problem is spreading to the mainstream. In the 2010 case of Nurre v. Whitehead, the U.S. Supreme Court upheld lower court rulings that school authorities can deny students’ rights to free speech just to keep other students from being offended. The courts are “allowing schools the discretion to let an offended minority control a cowed majority,” constitutional attorney John W. Whitehead wrote in Huffington Post. “There is no way to completely avoid giving offense,” he said. “At some time or other, someone is going to take offense at something someone else says or does. It’s inevitable. Such politically correct thinking has resulted in a host of inane actions, from the Easter Bunny being renamed ‘Peter Rabbit’ to Christmas Concerts being dubbed ‘Winter’ Concerts.”

In a democracy, there can be no right not to be offended. If anyone can claim that another person’s speech is offensive and ought to be prohibited, there is no limit to the restrictions that can be placed on free expression. As the late author, Christopher Hitchens said, “Freedom of speech must include the license to offend.” Wherever it is sanctioned, the “right” not to be offended invalidates the Bill of Rights and the Constitution. The difference between the U.S. and Cuba has to do with the right to say and think whatever you like even if someone is offended by it. “What protects people’s rights to say things I find objectionable,” Jodie Ginsburg wrote in The Guardian, “is precisely what protects my right to object.”

“Nobody has the right to not be offended,” said Salman Rushdie, the author targeted for murder by Islamic authorities who were offended by his novels. “That right doesn’t exist in any declaration I have ever read. If you are offended, it is your problem, and frankly, lots of things offend lots of people.”

In a well-publicized media interview, Canadian psychology professor Jordan B. Peterson was asked why his right to freedom of speech should take priority over a person’s right not to be offended. “Because,” he answered, “in order to be able to think, you have to risk being offensive.” Then he added, “You’re certainly willing to risk offending me in the pursuit of truth.” The interviewer was stopped dead in her tracks by Peterson’s astute reply.

The basis for the “I’m offended” movement lies in two flawed concepts: political correctness and “emotional reasoning.” Political correctness is a way of stifling free expression in favor of socially controlled thought. Emotional reasoning is where feelings determine the interpretation of reality. If someone is upset, that proves something is wrong. It doesn’t matter that you intended no disrespect. The subjective reaction of the other person determines the outcome. Under this doctrine, supported by the Left, free speech is an outdated concept.

The European Court of Human Rights just ruled that criticism of religion is not protected by freedom of speech and can be prosecuted if someone is offended. The ECHR has reinforced “hate speech” laws that prohibit criticism of religion in many European countries. Freedom of speech is restricted where religious feelings are wounded, especially if the religion happens to be Islam. It would appear that Islamic blasphemy laws have found a home in Europe.

When freedom of speech is curtailed because Muslims complain they are being offended, it plays into what is known as “civilizational jihad”—the attempt to transform Western societies so they can be brought under the control of Islamic law, known as sharia. Sharia does not recognize freedom of speech, nor does it accept any concept of individual rights as embraced by the West.

In Canada, the Human Rights Commission has defined harassment as “any unwanted physical or verbal behavior that offends or humiliates you.” For example, it is now a violation of Canada’s Human Rights and Criminal codes to use incorrect gender pronouns if it offends somebody who wants to be called Googoo instead of he or she.

The good news is that in the 2017 case of Metal v. Tam, the Supreme Court defended free speech. The unanimous decision was written by Justice Samuel Alito, who wrote the dissent in the Nurre case. “Speech may not be banned on the ground that it expresses ideas that offend,” Alito wrote. “Speech that demeans by race, ethnicity, gender, religion, age, disability, or any other similar ground is hateful; but the proudest boast of our free speech jurisprudence is that we protect the freedom to express ‘the thought that we hate.’” There may be hope for the First Amendment after all.

Ed Brodow is a political commentator, negotiation expert, and author of seven books including his latest, Tyranny of the Minority: How the Left is Destroying America.