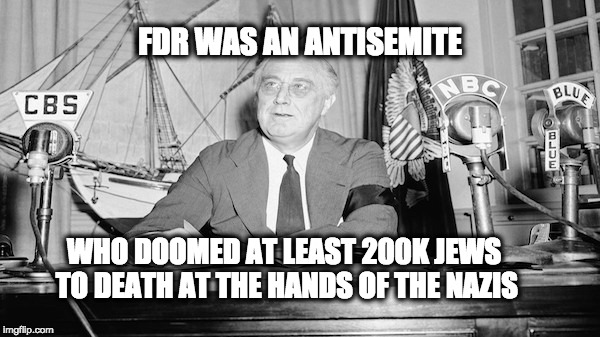 Typically, when one asks a Democrat about FDR they immediately develop a sense of awe that reminds me of those little green aliens (undocumented space men?) in Toy Story every time they see Buzz Lightyear.” AHHHHH!”

I’ve never understood the reverence for Franklin Delano Roosevelt. He gets points for picking great Generals and led this country to victory in WWII. But he totally mismanaged the economy, making the great depression longer…in 1937 unemployment spiked again reaching 19% (the previous high was 25%), his freedom-sapping policies never did get this country out of the Great Depression, and don’t forget that he tried to circumvent constitutional separation of powers (now who does that remind me of?). And then there is the issue never discussed, he was a bigot, his hatred of Jews caused hundreds thousands to be added to the ranks of Hitler’s victims.

Some point to the fact he didn’t he bomb and destroy the train tracks that were shipping Jews to the concentration camps? But my opinion sides with the people who say that wouldn’t have worked. The real question to be explored was why didn’t allow more Jews into the country and why didn’t he pressure Britain to allow Jews to move from Nazi controlled areas into what was then called Palestine?

In the book “FDR and the Holocaust: A Breach of Faith,” historian Rafael Medoff suggests that Roosevelt failed to take relatively simple measures that would have saved significant numbers of Jews during the Holocaust, because his vision for America was one that had a small number of Jews. In other words, FDR doomed many Jew to suffer not because he wanted them to die, but because he didn’t want a lot of them living in his neighborhood.

In 1938, he privately suggested that Jews in Poland were dominating the economy and were therefore to blame for provoking anti-Semitism there. In 1941, he remarked at a Cabinet meeting that there were too many Jews among federal employees in Oregon. In 1943, he told government officials in Allied-liberated North Africa that the number of local Jews in various professions “should be definitely limited” so as to “eliminate the specific and understandable complaints which the Germans bore towards the Jews in Germany.”

In 1936, he characterized a tax maneuver by the publisher of the New York Times as “a dirty Jewish trick.” In 1938, FDR privately suggested to Rabbi Stephen S. Wise, the era’s most prominent American Jewish leader, that Jews in Poland were dominating the economy and were to blame for provoking antisemitism there.  In 1939, Roosevelt expressed (to a U.S. senator) his pride that “there is no Jewish blood in our veins.”  In 1940, he dismissed pleas for Jewish refugees as “Jewish wailing” and “sob stuff.” In 1941, President Roosevelt remarked at a cabinet meeting that there were too many Jews among federal employees in Oregon.

Perhaps his distaste for Jews was the reason, that while there were many actions FDR could have taken to stop or slow down the Holocaust, he didn’t. “He could have quietly permitted the immigration quotas to be filled to their legal limit — that alone would have saved 190,000 lives,” Medoff said.

On Roosevelt’s most blatant acts of bigotry involved the St. Louis whose story was recently explained at Constitution.com

When Hitler came into power in Germany there was a large increase in the demand for Jewish immigration to Palestine as Jews tried to escape.  The British allowed around 50,000 Jews to immigrate from 1934-1936 but it infuriated the Arab population.Based on the higher immigration levels the Arabs started the an intifada against the Palestinian Jews. The Arab attacks continued for three years (1936-1939). Britain did take a stab at limiting the Arab attacks, but it was more important to keep the Arabs from jumping to the German side. So they began the British tradition of appeasing Palestinian terrorists, that exists even today.  Their solution was the White Paper of 1939.

The White Paper limited the immigration of Jews to Palestine which resulted in the death sentence. A limit of 75,000 Jewish immigrants was set for the five-year period 1940-1944, consisting of a regular yearly quota of 10,000, and a supplementary quota of 25,000, spread out over the same period, to cover refugee emergencies. After this cut-off date, further immigration would depend on the permission of the Arabs . Restrictions were also placed on the rights of Jews to buy land from Arabs—a restriction that President Obama tried to duplicate.

Today, Yom HaShoah we remember the horror of the Holocaust. It is sad to consider that partly because of Franklin Delano Roosevelt Antisemitism, and Winston Churchill’s appeasement, innocent people who could have been saved were instead abandoned.