FBI Knew ‘RussiaGate’ Was A Hoax By January 2017

Trump Was Inaugurated in January 2017 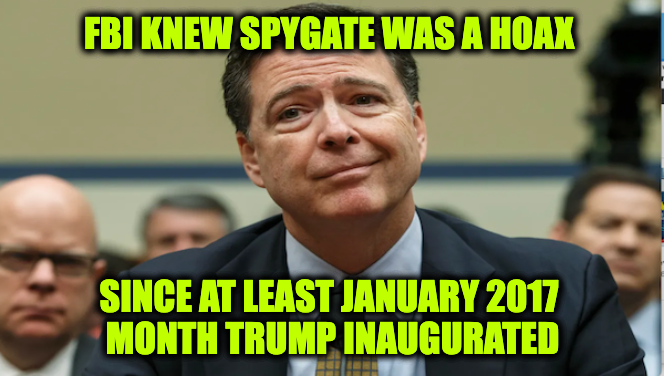 The “RussiaGate” ruse will almost certainly go down in history as one of the strangest and most desperate ploys in American political history. Still, mounting evidence now shows an even more sinister side to the Democratic controversy than ever before.

The issue at hand was the conspiracy theory, connected by those on the left side of the aisle back in 2016, that Donald Trump was somehow working for the Kremlin as he was campaigning for the presidency of the United States. To “prove” this, the FBI issued a secret warrant based on the unverifiable rumors within the “Steele Dossier,” allowing them to essentially spy on members of the Trump team.

This dossier just happened to be paid for by Trump opponent Hillary Clinton, adding another layer of connivery to the situation.

Now, as John Durham probes the impetus of this theory and the investigation that followed, he’s coming to some profound conclusions about what the FBI knew and when they knew it.

Declassified for Durham’s probe, a March 2017 memo prepared by Lisa Page for FBI head James Comey’s meeting with Congress’ “Gang of Eight” — the bipartisan House and Senate leaders who oversee the most classified stuff — was a total cook-up job.‘

It advised Comey to present accusations that Trump’s campaign chair Paul Manafort and foreign policy adviser Carter Page were working with the Russian government as coming from a confidential Russia-based source with real intel-community chops. In fact, the FBI had already established that the root source was US-based former Brookings flunky Igor Danchenko’s utterly speculative gossip with an ex-girlfriend and a Democratic Party hack.

That, plus publicly reported info, was all Christopher Steele (a retired British spy who doesn’t even speak Russian) ever had to back up his “dossier.” And the FBI knew it since at least January 2017, when it interviewed Danchenko.

FBI Deputy Director Andrew McCabe, counterintelligence officer Peter Strzok, analyst Brian Auten and Justice attorney Kevin Clinesmith pretended the Danchenko “intel” was credible to get the Foreign Intelligence Surveillance court’s OK for wiretaps on Carter Page and dupe the Justice Department to keep granting approval for Trump campaign surveillance (which did not corroborate the wild claims). Again, all while they knewDanchenko had admitted it was baseless.

As John Durham’s probe continues, we can only hope that any further threats to our free and fair elections are exposed…and quickly.