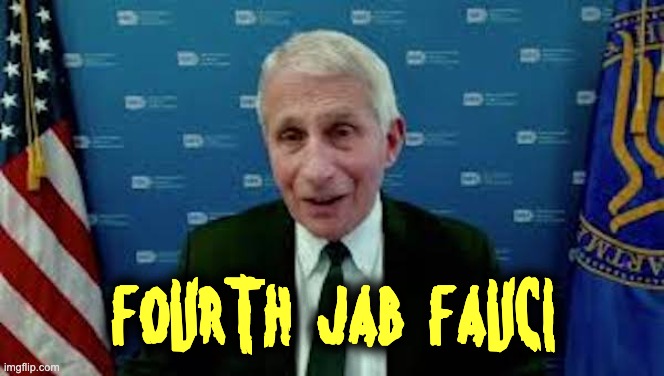 In mid-March, the one called by many on main street as “Dr. Wrong,” came out of his hole and made a pronouncement to us about injections:

We, the people, need to go get ready “sooner or later” for a fourth vaccine injection. That sooner or later, we are going to need it.

Evidently, the one called Dr, Flip-flop felt it was time to stir the pandemic pot a little. And to let it be known that he is still in control. In contradiction to the Nuremberg Medical Law which makes it a crime to provide medical intervention by force, he can order injections for you. And precisely that, “sooner or later,” a fourth injection of the mRNA vaccines would be needed.

And after all, who could challenge him? He declared he “is the Science.”

Well, maybe not… not so fast…

One of the largest high technology hospitals in the world is in Israel. The Sheba Medical Center is a magnet for anyone worldwide who wants to get advanced treatment for serious diseases.

For the fourth year in a row, Sheba Medical Center has been recognized as one of the Top Ten hospitals in the world. And the best in Israel.

Now Sheba Hospital has also just weighed in on this question of whether a 4th injection is needed or not.

“The Sheba Medical Center study… Efficacy of a Fourth Dose of Covid-19 mRNA Vaccine against Omicron, published by The New England Journal of Medicine, examines the efficacy of the fourth coronavirus vaccine from Pfizer and Moderna.”

“The interim results released show that the vaccine offers little to no protection against contracting the virus as compared to young and healthy individuals vaccinated with three doses.

For We the People during the pandemic, it’s been a question about how to confront and overcome any medical lies and malpractice coming from Fauci’s NIAID and his colleague Rochelle Walensky’s CDC.

Until now, almost anyone objecting to actual misinformation, has been cast as a “conspiracy theorist.” Or said to be someone spreading “misinformation” and, therefore, dangerous.

But now, on this issue of the fourth required injection, there is an actual scientific weapon at hand for us to fight back. To help deal with Fauci’s last stand… his effort to inject more and more people with an experimental so-called vaccine… which can’t prevent infection, disease transmission, hospitalization, or death. But it has 9 pages of side effects.

That SWORD OF TRUTH for us to use is the Sheba Medical Center new study.

A study done by experts and published in the prestigious New England Journal of Medicine. Conducted by and written by people who actually understand pandemic viruses and who have no political ax to grind or financial benefits in the game… the study clarifies that a fourth vaccination would be useless.

The study was led by Dr. Professor Gili Regev-Yochay, “director of the Infection Prevention and Control Unit at Sheba Medical Center.

She also noted that in terms of the effectiveness of the fourth vaccine against infection – both of Pfizer and Moderna – they found that the infection rates among vaccinated individuals were only slightly lower than those in the control group.”

Not only was a fourth injection found to be useless, but also the entire vaccination program until now had not produced significant results to control the pandemic infections.

This study is a sword for us to use when the one called by some Dr. Freedom-killer attempts to drag us into a rendezvous with a fourth injection.

If Fauci and his minions come after you and your family again, why not use that Sword Of Truth, so shut down medical tyranny.